It is okay to envy Heather Fullerton’s commute to work.

For years, Fullerton has researched the sea life that surrounds hydrothermal vents, which pop up on the ocean floor where seawater meets magma. Chimney-like structures form on the seafloor at these hydrothermal vents and spew extremely hot mineral-laden fluid at 700 degrees Fahrenheit into the cold ocean water. These vents provide a unique ecosystem for crabs, tube worms, fish and microbial life – but, because of the remote location of these vents, it is extremely hard to study.

So, she catches a ride on Alvin to go to her job site.

Alvin is the Human Occupied Vehicle (HOV) submarine that can dive to depths of nearly 15,000 feet. Best of all, Alvin can stay underwater for up to 10 hours at a time, which allows two researchers and a pilot to spend quality time on the ocean floor collecting samples, observing sea life and conducting research. For the past couple of winters, Fullerton, along with a select group of fellow scientists, has taken Alvin down to the ocean floor to conduct various research projects far off the coast of western Mexico. The materials and data collected form the basis of her summer research projects with undergraduate and graduate students.

During the time on the ocean floor, Fullerton, an assistant professor of biology at the College, collects microbes that grow near hydrothermal vents and serve as the foundation of the food chain. She hopes this research will shine a light on the genetic and evolutionary differences and similarities between the microbes that live in and around different hydrothermal vents worldwide. 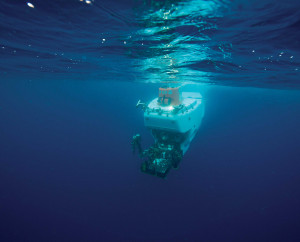 Alvin will soon be able to dive to a depth of 21,000 feet (photo courtesy of the Woods Hole Oceanographic Institute).

Outfitted with high-definition cameras, advanced lighting and two titanium robotic arms, Alvin allows Fullerton and her fellow scientists to observe the seafloor and perform experiments at depth on “microbial mats” and the diverse animals that live there in total darkness.

The trip to the bottom of the ocean is an amazing experience.

“About 15 minutes into the descent, the sunlight no longer penetrates from the surface, and we enter total darkness,” she says. “But this darkness is eventually broken by bioluminescence. It’s a beautiful sight.”

Normally, Fullerton would prefer to be in the HOV and continue checking on the ecosystems surrounding the hydrothermal vents, but as everyone knows, 2020 is not a normal year. Instead of taking Alvin to the depths of the ocean for research, she spent time in Charleston working with undergraduate and graduate students analyzing genetic differences using computer-based analyses on some of the samples she recovered in previous dives.

Fullerton doesn’t mind immersing herself in analyzing data, but she hopes to be reunited with Alvin soon. She recently applied for a seat on Alvin as it does a series of scientific verification dives to a new depth of 21,000 feet (four miles) next year.