Alumna Is Coming Up Aces

Most people look at a tennis court and see a bunch of white lines and a net. Elizabeth “Vinny” Seiverling ’01 sees a sacred space.

“Tennis is a lifelong sport,” she says. “With practice, you can not only become a better player, but a better person.”

Skills like self-control and time management were honed during Seiverling’s time on the courts at the College and continue to serve her well as the director of dermatology at Maine Medical Center in Portland, Maine.

She recently received the Innovation in Teaching Award for teaching dermoscopy to primary care physicians. Her work aims to improve early detection of skin cancer in the primary care setting, with the ultimate goal of reducing melanoma death rates in Maine, which are the sixth highest in the nation.

At 38, the former women’s tennis student-athlete is the youngest division director at the medical center and credits much of her success in medicine to her playing career at CofC.

From a young age growing up in Hershey, Penn., Seiverling knew she wanted to be a doctor. She also wanted to play professional tennis – two careers that might not seem to have much in common. But, according to Seiverling, they do.

“Sports build confidence,” she says. “Tennis taught me to have short-term memory, because you have to learn to lose a point and keep going. That confidence is invaluable in life.” 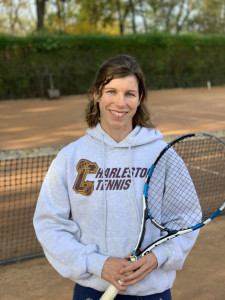 After graduating from high school two years early, she was recruited by the University of Tennessee, one of the top NCAA Division I women’s tennis programs in the country, and a university where sports are embedded in the culture. But pursuing her dreams of being both a pro player and a doctor wasn’t possible at UT because of the grueling practice schedule, so, for her final two years, she transferred to CofC, where she found that “you are treated as a student first and then an athlete.”

Director of Tennis and Women’s Tennis Head Coach Angelo Anastopoulo takes pride in cultivating well-rounded players who are as successful in the classroom as they are on the court. The team’s average GPA was 3.5 in Seiverling’s first year with the Cougars.

“Vinny was the epitome of the perfect recruit,” says Anastopoulo. “A great athlete, fierce competitor, strong student, she strived to make an impact on the world. She was always a source of inspiration for her teammates. I often think of her wicked sense of humor, too. Although she was one of the most talented players in the country, she always kept herself humble and was down-to-earth from Day One. Her successful medical career is certainly not a surprise.”

Upon graduating at the top of her class from the Penn State University College of Medicine, Seiverling was accepted into one of dermatology’s top residency programs at the University of California, San Francisco. After her time in the Bay Area, she worked as a physician and professor in Washington state and Pennsylvania, before moving to Maine.

Despite her busy schedule, Seiverling still makes time to get out on the courts. In 2012, she won the Women’s National Hard Court Championship (30 and up division) and finished the year as one of the top three singles players in the U.S. in that age group.

She’s also been teaching her 6-year-old son Aster and 4-year-old daughter Linden to play on the red-clay court at the family farm in Pennsylvania – making sure she imparts the invaluable lessons she learned from Coach Anastopoulo at the College.

In other words, she’s playing it forward.