By Amy Stockwell|2021-06-28T12:35:46-04:00November 23, 2020|College of Charleston Magazine|Comments Off on Online Treasure Hunt Leads to Rare Find
Harlan Greene’s official title is scholar-in-residence in Addlestone Library’s Special Collections, but, in truth, he’s more like the College’s version of Indiana Jones. Instead of finding rare artifacts in booby-trapped caves, however, Greene finds them going down Internet rabbit holes, searching through the vast quantity of materials online. All that’s missing is the fedora. “The job of historians and archivists is to fill in the gaps of history with artifacts,” he says, noting that some of those artifacts are donated, but, more often, it’s up to the archivist to find the treasure. Late one night several years ago, Greene came across a potential treasure. Plugging “Charleston barracks” into the search button on eBay, he discovered a high-resolution reproduction of an 1814 drawing of a barracks by painter and printmaker John Rubens Smith, who visited Charleston in the early 1800s. Greene knew that barracks were the College’s first building, but all he had was a physical description. The barracks were torn down before photography came into existence. He bought the drawing for $12 and, busy with other projects, filed it away in a drawer, where it stayed for three years. It wasn’t until the College began planning its 250th anniversary celebration that Greene took another look at the drawing. He was one of several researchers creating content for the College’s Discovering Our Past website and thought the drawing deserved closer inspection. He reached out to Grant Gilmore, chair of the Historic Preservation and Community Planning undergraduate program and the Community Planning, Policy, and Design program in the Graduate School, University of Charleston, South Carolina. Together they examined the reproduction. “As an archeologist and a historic preservationist, you start by asking questions,” says Gilmore. “We looked at the style and the perspective in the drawing to determine if it was drawn from life. We were literally testing a hypothesis.” Gilmore and Greene enlisted the help of Ali Heath – a student in the Community Planning, Policy, and Design graduate program – to mock up a 3D rendering, and manipulated the image to see where it would fit in the existing landscape. The big breakthrough came when they identified another structure depicted in the drawing as 58 George Street, known today as the Barnard Elliott House. Details on the still-existing building matched up, and they concluded that the barracks were indeed those in the Cistern Yard that were used for the first classes at CofC. “It wasn’t a huge discovery, but we’ve verified that this is the first image of the College,” says Greene. “It was a gamble, and it paid off. Grant really is the hero of the story.” 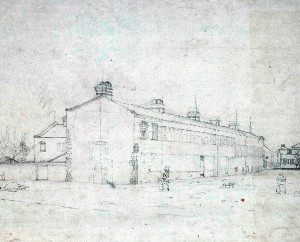 The drawing depicts barracks that were used in the American Revolution by the 2nd South Carolina Regiment under William Moultrie. (The original is in the Library of Congress.) Plat maps indicate that those buildings were in the approximate area of what is now Cistern Yard. The College’s first president, Bishop Robert Smith, oversaw renovations to the barracks, which were transformed into classrooms. When renovations were complete, students moved in and, according to legend, dug bullets out of the wall when they were bored. The former military spaces were not ideal for learning, and, by the early 1800s, conditions had worsened. The College recruited Jasper Adams to be the next president, and enough funds were raised during his tenure to build a structure dedicated to the instruction of students. The barracks were torn down, and a cornerstone-laying ceremony marked the beginning of construction of Randolph Hall on January 12, 1828. “Every building tells a story,” says Greene. “Our campus is a living classroom where students can parse the past by examining its structures.” Even ones that are no longer there, thanks to Greene’s discovery and Gilmore’s detective work.