Most people who travel to Hawaii seek the sun, the beaches and total relaxation. Heather Spalding, an assistant professor of biology, goes to the islands to search for something a lot of people try to avoid – algae.

For years, Spalding has traveled to the islands to dive with her fellow researchers in the waters of the Papahānaumokuākea Marine National Monument, located to the northwest of the main Hawaiian Islands. The scientists have spent countless hours exploring and documenting the coral reefs and the native algae in this uninhabited, remote and pristine conservation area.

During a dive in 2015, they discovered a strange red-colored seaweed growing on a small portion of the coral at Pearl and Hermes Atoll.  When they returned in 2019 to document any changes in the strange alga, they were stunned by what they discovered. The mysterious alga had grown and spread quickly to much of the coral surrounding the original location. The alga was so thick and widespread that it not only killed the coral reefs, but also the native organisms and algae that used to flourish in the area. They also discovered that the area was noticeably absent of the thriving sea life that normally lives among the coral.

After diving in areas around the entire atoll, they found that the alga had continued to spread and kill the surrounding coral reefs.

The scientists were stumped.

“This species is wild,” says Spalding, who published a paper on the discovery in July. “I have worked with a lot of different invasive algae around the world and have never seen anything like this before.” 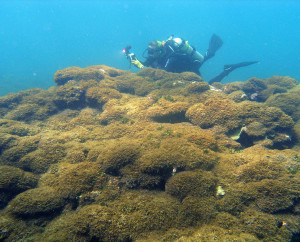 Not only have they never seen an alga like this, but scientists also had no idea where the alga came from. Was this an undescribed native species that suddenly went out of control, or an invasive species introduced from somewhere else?

This new aggressive species of alga is bad news for the marine monument, which is home to many rare species of coral, fish, birds, reptiles and marine mammals. If this species of alga continues to grow and spread unimpeded, it will be disastrous.

So, is the alga continuing to grow? Spalding’s not sure.

Because of the pandemic, Spalding and her colleagues were not able to visit Papahānaumokuākea this year, but she hopes that they will get to inspect the area in 2021 and get an update on the damage caused by the alga they have now named Chondria tumulosa.

“Everyone is holding their breath right now because we do not know what we will find when we go back,” she says.

Once an invasive species such as Chondria tumulosa takes hold of a marine ecosystem, there is no straightforward way to reverse the change. She and her colleagues plan to gather as much information as possible on their next visit to Papahānaumokuākea to try to determine ways of controlling the alga, but current research shows that Chondria tumulosa grows so quickly that it has the potential to overgrow entire reefs within a year.