Above: Yaron Ayalon, director of CofC’s Jewish Studies Program, built several pieces of furniture for the Jewish Studies Center, including a large bookshelf and cabinet. (Photo by Heather Moran)

With the right tools, the right materials and the right space, Yaron Ayalon can create something pretty special. And, when he joined the College of Charleston as director of the Yaschik/Arnold Jewish Studies Program in July 2019, he knew he had all the right stuff to build on.

He just had to make a good first impression – and that meant giving the heavy, dark, American standard furniture in the program’s main office a facelift.

“In line with the strategic plan,” he says, “if we are going to recruit and retain students, we need to portray that we are young, dynamic and innovative.” 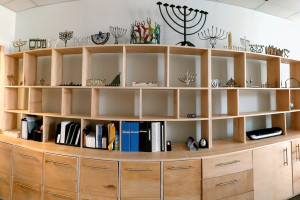 Fortunately, Ayalon had some plans. He had begun dabbling in carpentry three years ago, when – armed with a saw, a drill and a sander – he built an obstacle course for his children in the basement of his Indiana home. When the family moved to Charleston, in addition to building a jungle gym for the kids, he and his wife decided to build their own closets – and deck the laundry room out with built-ins while they were at it.

“Many of the DIY assemble components are not very good,” says Ayalon. “The drawers are especially bad. The pressed wood bottoms can’t hold much weight.”

Determined to save money and not pay for “garbage drawers,” Ayalon spent hours watching YouTube videos on how to build good drawers before he built his own solid drawers with 1/4″ plywood bases.

Building on the success of his efforts at home, Ayalon was ready for another challenge and decided to apply what he’d learned to the furniture in in the Jewish Studies Center. 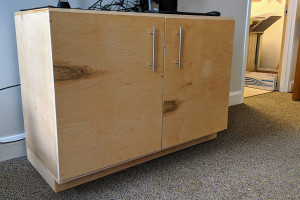 Cognizant of the trust donors to Jewish studies put in him, Ayalon started the project with cost in mind. He used his garage workshop for cutting, sanding and coating wood with a polyurethane finish and shuttled the wood to the Jewish Studies Center – and sometimes back again – for assemblage. By donating his time (it took about 70 hours all told) and buying supplies with a focus on low wastage, he was able to build some formidable file cabinets with 1/4″ plywood bottoms and two desks and a coffee table made from butcher block wood – all for 50% of what new furniture would normally cost.

The new furniture and shelving Ayalon built have certainly created a bright, welcoming environment for students. Still, he isn’t quite satisfied.

And, with his eyes already on the center’s main lobby for his next project, Ayalon might not see perfection yet – but he’s definitely building up to something pretty special.