Halsey Director Retiring After 26 Years at the Helm

By Amy Stockwell|2020-12-22T08:56:36-05:00December 10, 2020|All News, Campus Life|Comments Off on Halsey Director Retiring After 26 Years at the Helm
Above: Mark Sloan, center, with Courtenay Cone, left, and Pam Fischette, right, at the opening of the 2017 exhibit Sea Change. Some might wonder why colleges and universities have art museums and may even question the value of the museum to the institution. Mark Sloan, director and chief curator of the Halsey Institute of Contemporary Art at the College of Charleston, has dedicated the last 26 years to answering that question. During his tenure, the Halsey Institute has been transformed from a small, sleepy gallery to a vibrant space with engaging, imaginative shows that drew visitors both near and far and introduced the community to innovative contemporary art. “All the liberal arts disciplines come together in one place at the Halsey Institute; the humanities, arts and sciences are presented in conjunction with educational programming that includes discussions, film screenings, lectures, conferences and panels,” says Sloan, who is retiring at the end of the month. “People from across campus and all over the world are involved in Halsey programming.” 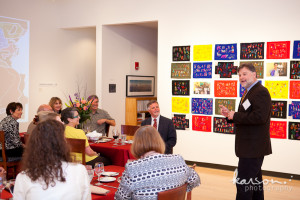 Mark Sloan gives a presentation regarding the Halsey Institute.

English professor and Speaker of the Faculty Senate Simon Lewis agrees and says, “Not only is the Halsey the leading gallery of contemporary art in the Southeast, it is also at the intellectual heart of the CofC campus, brilliantly combining creative expression with original thinking and consistently expanding viewers’ perspectives on the world around us.” Year after year, under Sloan’s leadership, the Halsey Institute has produced exceptional exhibitions. Southbound: Photographs of and about the New South was the largest exhibition of photographs of and about the American South in the 21st century. Co-curated by Sloan and Mark Long, professor of political science, the 2018 exhibition was comprised of photographs accompanied by a commissioned video, an interactive digital map, a website and an exhibition catalogue. Japanese artist Motoi Yamamoto’s 2012 exhibition Return to the Sea: Saltworks featured a site-specific installation created entirely out of salt by Yamamoto during his two-week residency at the Halsey Institute. “I am continually impressed by both the role the Halsey Institute plays in campus life and in its commitment to bridging the campus to diverse communities both locally and throughout the world,” says Scott Watson, City of Charleston director of cultural affairs and adjunct professor for the arts management program. Watson cites the 2016 “New World” procession led by Fahamu Pecou from Gadsden’s Wharf on Charleston Harbor to the Halsey as one of the highlights of Sloan’s career. These impactful moments are not always easy. In fact, Halsey Institute exhibitions have often invited viewers to see, consider and experience controversial and challenging art. “Contemporary art is difficult for people because it makes them uncomfortable, and they often feel intimidated by the art,” Sloan explains. “We show artists that no one has ever heard of, artists who are not household names. One of the things we say quite often is that the role of art is to help you ask better questions, not to provide you with answers. It’s to provide you with opportunities to learn about questions that you might not even know needed asking.” 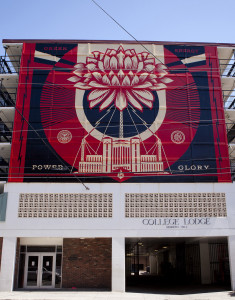 Mark Sloan brought Charleston native Shepard Fairey to Charleston in 2014 for both an exhibition and public art pieces. This mural on CofC’s College Lodge is one of five installations created for Charleston.

During his 26-year career at the College, Sloan has curated 245 exhibitions, including 35 student shows and raised more than $6 million in external support through grants that include the Andy Warhol Foundation for the Visual Arts, the SC Arts Commission and the National Endowment of the Arts (NEA). Sloan jokes that the Halsey Institute is the NEA’s poster child: “We’re the little museum that could.” In 2012, the state recognized Sloan and the Halsey with the South Carolina Governor’s Award for the Arts for art initiatives throughout the state. Halsey Institute exhibitions have produced nationally award-winning catalogues and videos that have been featured in prominent publications including the Guardian, New York Times, Wall Street Journal and Art in America. “Nothing is off the table for Mark — we brought 10 Japanese artists to be in residence for six weeks one time — who does that!? Mark does,” says former student, Katie Lee-Koven ’01, executive director and chief curator, Nora Eccles Harrison Museum of Art, Utah State University. “It is Mark Sloan, and no one else, who introduced Charleston and the College of Charleston not only to contemporary art, but art that asks us the best and the hardest questions. Art that stays in your mind for years after you see it. It was an extraordinary honor to work with Mark. He’s the cream of the crop as a curator and an arts administrator.” “Having an institution like (the Halsey), on campus, where students can walk through the exhibitions … enables them to really take art seriously on a different level,” says American artist Renée Stout who exhibited at the Halsey in 2013 and in the current virtual exhibition Dis/placements: Revisitations of Home. “When they finally get out into the world, whether they’re art students who have an intimate relationship with the Halsey, or just people walking through the building, it’s all about the quality. One day they’ll realize what a gem they had right here on campus.” Sloan does not want to look back at his time at the Halsey Institute as the “golden age.” He hopes the foundation he built continues to grow and is confident he’s leaving the Halsey in good hands. “The staff has the capacity to take the organization to new heights.” Stay tuned with Halsey Institute exhibitions and programming events by logging in to http://halsey.cofc.edu/exhibitions/upcoming.