Dean of Students Leaves a Legacy of Leadership

When she first moved to Charleston in 1987, she was hired as a visiting assistant professor at The Citadel. Because The Citadel is a military college, instead of being named a professor, she was given the title of Captain Cabot.

The captain title was dropped when she left The Citadel, but the leadership part endured. For over 25 years, Cabot has been a major force in the development and expansion of the Division of Student Affairs at the College of Charleston.

She was first introduced to student affairs while working as a visiting assistant professor in the College of Charleston Department of Political Science. Then, one day, a student asked her if she would be interested in becoming the faculty advisor for the CofC student newspaper.

“I foolishly said yes,” she says with a smile. “I had no idea what kind of a whirlwind student media would be.” 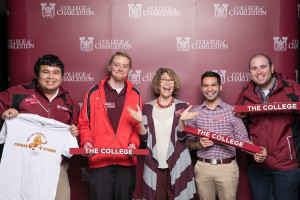 Jeri Cabot, third from left, poses for a photo at a CofC staff event. (Photo by Mike Ledford)

Under her leadership, student media flourished. Not only did she help grow the student newspaper, CisternYard News, and other publications, but she also guided students in establishing the student radio station, CisternYard Radio, and the student video channel, CisternYard Video, under the umbrella of CisternYard Media.

Cabot gradually found herself inching more and more into student affairs as she started advising the student government and working with college assessment. Soon, she was spending more time working with the Division of Student Affairs and less time teaching political science.

In 1994, she was hired as the special assistant to the senior vice president of student affairs. Three years later, she was promoted to the director of student judicial affairs.

Cabot had taught media law and regulations as an assistant professor in the School of Telecommunications at Ohio University before her move to Charleston, but she still needed to get up to speed on issues surrounding student conduct systems for her new director position. She presented papers and networked at professional conferences, spent countless hours in the library and studied the latest information concerning student conduct standards, upholding student rights and responding to student grievances.

“It was an energizing experience working with stimulating faculty and students,” she says. “I am proud that we started the program’s first advisory board and made fundraising a priority.”

In 1999, Cabot was named dean of students at the College. A short time later, she was promoted to the associate vice president for students affairs and dean of students. During her tenure in student affairs, she created programs that have become pillars of the College of Charleston experience. She launched the Center for Civic Engagement, the College’s Title IX response protocol, the Students of Concern Committee, a new Honor Code, an Honors College residence hall, the Collegiate Recovery Program and more. Along the way, she served stints as interim vice president for student affairs under CofC presidents Lee Higdon, P. George Benson and Glenn McConnell.

She says the nature of the position of dean of students has evolved significantly in the past two decades. There is less emphasis on managing student accountability and more on being an advocate for improving student care. Today the role is more comprehensive in its range of functions and its vision for student development and student care networks. 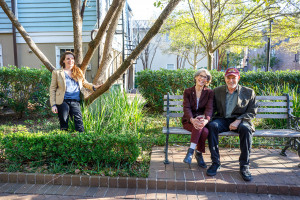 Jeri Cabot with her husband Bill Olejniczak, a CofC history professor, and her daughter Robyn Olejniczak, who works as a director of student records in CofC’s Graduate School. (Photos by Heather Moran)

As she heads toward retirement at the end of the month, Cabot says she has enjoyed working with her colleagues at the College over these many years. These colleagues include her husband, Bill Olejniczak, a professor in the Department of History, and her daughter, Robyn Olejniczak, who is the director of student records in the Graduate School, University of Charleston, South Carolina.

Despite working in the same location with her husband for many years, Cabot admits that they rarely saw each other on campus.

“We didn’t drive in together and we did not leave campus at the same time,” she says, joking, “I always worked later. We did, however, see each other at the holiday party.”

Things were a little different when it came to seeing her daughter on campus, she says: “I would make it a point to go see Robyn if I was ever on the third floor of Randolph hall (where Robyn’s office is located).”

Cabot plans to stay active in the community and may take a few classes at the College once she is officially retired. She admits that she will miss working at CofC.