More Than 300 Students to Graduate in December

By Tom Cunneff|2021-01-12T09:45:58-05:00December 18, 2020|All News, Campus Life, Students|Comments Off on More Than 300 Students to Graduate in December
While most students at the College of Charleston graduate in May, there are a few hundred who complete their degrees each December. And just like for spring graduates, the accomplishment is one to celebrate – an achievement made through hard work, perseverance and dedication. Although there won’t be the traditional Winter Commencement ceremony inside TD Arena due to COVID-19 protocols, the more than 300 students finishing up their undergraduate and graduate degrees this semester will have the option to participate in Spring Commencement ceremonies, which are scheduled for May 7 and 8, 2021. For the College’s December 2020 graduates, receiving their diplomas against the backdrop of a global pandemic  – and all the challenges that presented – is truly something to applaud. Meet three winter graduates who remind us that education is as much about the joy of learning as it is the act of earning a degree. Natalia De Alba 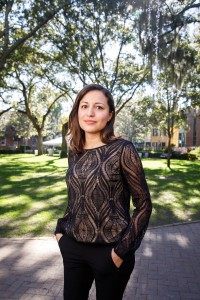 Growing up in Guadalajara, Mexico, Natalia De Alba, 29, had never even heard of Charleston, South Carolina, let alone the College of Charleston, but life can be full of surprises. She met and married a man from Charleston, before moving to the Holy City in late 2010. Shortly after, De Alba gave birth to a daughter. Then six years ago, she went to work as an immigration paralegal, doing a lot of interpreting for court cases. She also did volunteer work translating for immigrants at the ICE (Immigration Customs Enforcement) detention center in North Charleston. It all sparked a desire to attend law school one day, so she began taking courses at Trident Technical College before enrolling at CofC in 2019 as a Spanish major. Other students said that must have been an easy major for someone who grew up speaking the language, but De Alba insists that’s not the case. “It’s really no different than an American studying English,” she says. “There are all the rules of grammar I really didn’t know.” Then there was all the Spanish literature, politics and culture of several Spanish-speaking countries she had to learn about. “I really enjoyed learning what they had to teach us,” she says. “The Spanish language department was very knowledgeable. There were quite a few professors who had no accent at all when speaking Spanish. The College is very immersed in cultural exchange. I felt very welcomed and supported by all of the professors.” That support was particularly important since she kept working full time (she now is a paralegal at an insurance defense firm, Wilson, Heywood & Horn), and she is newly single. “It’s definitely been a struggle, but my daughter’s grandparents help out,” she says. “We share custody, so on the weeks I had my daughter, it was tough, but my professors were very flexible with assignments. I’m very glad to finally finish college, mostly because I did it for my daughter. She kept me going and I hope to make her proud.” Aika Ishimori 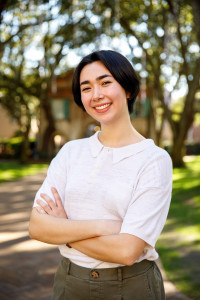 One of the joys of college is self-discovery, but it can also be a little nerve-wracking trying to figure out what you want to do with the rest of your life. “I’m taking an extra semester because it’s kind of been a whirlwind,” says Aika Ishimori, who started out in the Honors College as an undeclared major before settling on a degree in arts management with a music-industry concentration as well as minors in religious studies and geology. “It’s been a wild ride and definitely a journey of self-discovery trying to figure out what I wanted to do. My personality is so fragmented, it’s hard to decide exactly what I want.” But, then, that’s the whole advantage of a liberal arts education: it prepares you to be ready for anything that comes your way. “My mindset has just been to grab any opportunity that seems good and interests me,” she says. “I’m hoping that by following my heart something good will come out of it. Once I graduate I’m going to continue following my curiosity and seeing where it takes me.” That innate curiosity led her to really make use of her time at the College. She was involved in an art collective for students and did an internship at Ohm Radio where she produced her own show, conducting remote interviews with musicians around the country. She also started CofC’s first Kendo club, a Japanese martial art based on the samurai tradition that uses bamboo swords and protective gear. She began practicing it in 2015 growing up in Columbia, South Carolina. “Being in a new environment, I wanted to continue my hobby of Kendo, but there wasn’t anyone here who did it, so I started a club,” she says. “It was a challenge, but it turned out really well. There are just really interesting people who are attracted to Kendo. It’s been a lot of fun. I’m really glad I pushed myself to get that going.” And this spring Ishimori started the music blog Turntable Ruminations after she was inspired by one of her music industry classes where she discovered she had a passion for writing about music. The blog features track/album reviews, interviews with bands and musicians as well as industry news. Ishimori doesn’t have a dream job in mind, but is interested in working at a nonprofit, perhaps in Raleigh, North Carolina, where her boyfriend has a job offer. No doubt the whirlwind of college has prepared her well for the whirlwind of life. “Being at a smaller school, I actually got to know the professors and fellow students, as well as so many different types of people,” she says. “It’s been a great learning experience. I’ve learned a lot about myself and a lot about other people.” Austin Purtell 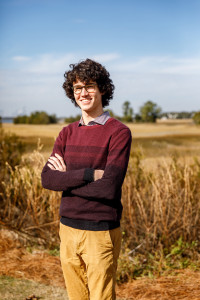 It’s not easy completing a degree in four years, let alone earning three degrees in that time, which is why Austin Purtell needed a little extra time to get his B.A. in astronomy, B.S. in computer science and B.A. in computing in the arts – with a 3.8 GPA, no less. “I’m pretty excited to be wrapping things up,” he says. “I had to take some summer classes and an extra semester to get it done.” Coming from Clover, South Carolna, near Charlotte, he chose CofC after getting a tour by Sebastian Van Delden, the dean of the School of Sciences and Mathematics, and hearing him talk passionately about the computer science department. The College of Charleston Foundation Scholarship recipient also was impressed by the atmosphere of the College and the location. His favorite experiences at the College involve the four astronomy research projects he took part in with the support of professors Joe Carson, George Chartas and Chris Fragile. Purtell was among the first students to use the College’s new 24-inch PlaneWave telescope – the most powerful in the state. In addition to using the telescope to measure the brightness of a star as a planet passed in front of it (transit photometry), which is how astrophysicists discover exoplanets, he also got to observe a passing asteroid and used his computing in the arts skills to make an animation of it. Incredibly, he also found time to be a resident assistant and teaching assistant, too, during his four and a half years. Armed with his three degrees, he’d like to find a job in either the space or entertainment industries doing gaming or movie computer effects. “Long term I want to help the environment in some way,” he says, adding, “I think I made a pretty good use out of my four years.”