The CofC Cistern: More Than Meets the Eye

There’s something special about the Cistern. As the College of Charleston’s most iconic landmark, the Cistern has been the backdrop for moments big and small for generations of students. It’s where friends meet, where presidents speak, where futures begin. It’s a place full of promises and memories, evoking feelings of hope, intention, anticipation and nostalgia.

The Cistern has come to mean many things to many people over the years – becoming a gathering place for students (who were said to be “cisternating”), a dunking place for freshman initiations and pranks, a place of legends and superstitions, and even a stage for commencement.

But the Cistern wasn’t always full of such significance. In fact, before it came to serve as the heart of the College of Charleston campus, the only thing the Cistern was full of was water.

The Cistern was built in 1857 to address the problem of rainwater running off the roof of Randolph Hall (then  referred to as the Main Building) and into the basement. The College paid a local mason, James Kennedy, $100.47 to build the structure – and an additional $317.80 went to Fairchild & Hamlin Brick and Lumber to cover the estimated 55,400 bricks used in its construction. 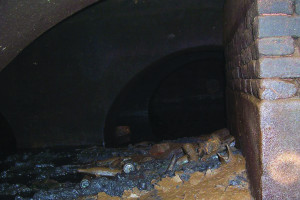 The interior of the Cistern at the College of Charleston

“The Cistern in front of Randolph Hall is unusually large, as it had to receive rainwater from the roofs of Randolph Hall and Towell Library (then known simply as the Library),” says Robert Stockton, an adjunct history professor. “Its oval shape is also unusual, and rather elegant.”

And that’s just what you see on the outside. On the inside, the 30-foot-long Cistern, which is a little over nine feet deep, has four chambers, connected by three arches and covered by brick vaults that support the earth above. Two large steel inlets bring water into the Cistern, four lead pipes allow a suction discharge, and two overflows prevent it from overfilling.

Holding 30,000 gallons of water, the Cistern not only served to divert water from the basement of Randolph Hall, but also provided water for fighting fires and drinking water for the neighborhood until Charleston’s waterworks were established in 1879.

Most homes built before 1890, however, had their own cisterns, as they were needed to get uncontaminated water on the peninsula.

“Before the city water system was established, every residence had a cistern or a well. A cistern was preferred because the water was cleaner,” says Stockton. “The scuppers brought rainwater directly from the roof into the watertight cistern. Wells, on the other hand, could be polluted by effluence from nearby privies, stables, etc. Cisterns were situated under the house or to the rear of the house. Some houses had metal cisterns in the attic, but the masonry cistern was more typical.”

It’s no wonder, then, that the Cistern in front of Randolph Hall is just one of many cisterns on the College of Charleston campus. In fact, the College has at least 10 – and possibly as many as 50 – old cisterns scattered across its grounds.

“Most cisterns were closed up after households got running water (some have been converted into wine cellars),” says Stockton, noting that isn’t always the case. They can be seen at the Erckmann House (9 College Way) and the Abiel Bolles House (7 College Way), for example. “I have always thought that the location of the cistern at 7 College was unusual – right in front of the piazza. It’s where you’d expect the piazza door.”

Records show, too, that the William Johnson House at 107 Wentworth Street, now home to the Sigma Pi Epsilon Fraternity, had a 20-foot cistern with an arched top and cement lining, much like the ones found at the E.M. Hacker Tenements at 2–8 Bull Street, now serving as historic student residences. Constructed in 1907, each of the houses has a cistern that can be accessed from the crawl space.

But not all CofC cisterns are created equal. As the College wraps up its 250th anniversary celebration, we dug around to uncover a few other key cisterns on campus. 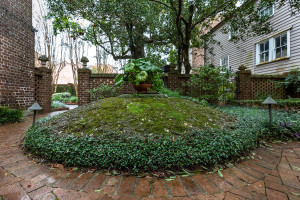 This tabby cistern is located just inside the gate at the Bishop Robert Smith House (aka the President’s House) at 6 Glebe Street.

Perhaps the second-most known cistern on the College of Charleston campus is the tabby (oyster shell and lime) cistern in front of the President’s House. The cistern remains have been covered in moss and are a focal point in the garden to the Bishop Robert Smith House, a Georgian mansion that was built between 1774 and 1778 as the parsonage house for the rector of St. Philip’s Church. The house served as the home of the state’s first Episcopal bishop, Robert Smith, who also served as the College’s first president, and the gate leading to the cistern is a nod to the design of the gates at St. Philip’s Church. 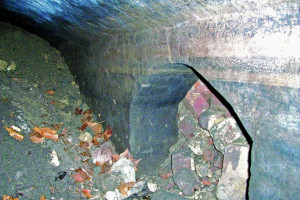 In 2009, residence life staff members were investigating what they thought to be a sinkhole behind the Chi Omega House at 38 Coming Street. It turned out to be a well-preserved 10-foot deep cistern with two 5’x15’ barrel-vaulted chambers.

“Looks like a typical cistern, built of brick (probably locally made Carolina grey brick), with an arched roof and plastered on the inside for waterproofing,” says Stockton.

The house, known as the John Scott House, was built circa 1770, and is one of the oldest buildings on campus, says Stockton. Its cistern, which is rectangular in shape, expands underneath the back of the house, which is not part of the original structure. 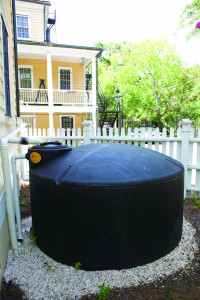 The newest cistern on campus, a 1,100-gallon stormwater-harvesting barrel, was installed behind 26 Coming Street to collect rainwater from the political science building’s roof.

The first modern cistern on campus was installed behind 26 Coming Street in 2010 to collect rainwater from the political science building’s roof. The 1,100-gallon, 51″ high stormwater-harvesting barrel is used for irrigating the adjoining gardens during dry spells. This system has saved the College some 15,000 gallons of water (around $1,000) a year and reduced stormwater runoff to nearby streets.

“The installation of a rainwater harvesting system like a rain barrel or a cistern turns a problem – excess stormwater runoff and flooding – into a solution,” says Tim Callahan, chair of the Department of Geology and Environmental Geosciences and faculty in the master of science in Environmental and Sustainability Studies Program.

The building, explains Callahan, has 930 square feet of water that drains into two downspouts and every inch of rainfall yields about 6/10 of a gallon – so, for this particular roof, about 550 gallons of water is yielded per inch of rainfall.

“The three main benefits are economics, education and environmental protection,” he says. “In addition to cost savings from reduced water consumption, the College is demonstrating to the public how easy it is to harvest rain from rooftops and reduce their water costs.”

Most buildings can be outfitted with rain barrels or cisterns to provide the same resource benefits for irrigation and to reduce stormwater, Callahan adds, noting that the College partners with the Ashley Cooper Stormwater Education Consortium, which can assist homeowners and businesses install similar rainwater harvesting systems on their properties.