Most college presidents generally leave once they step down from the role – often strolling off into retirement or to head up some fancy think tank or consulting firm. But in the case of Alex Sanders, who served as the 19th president of the College of Charleston from 1992-2001, he’s only just now leaving the College after teaching his Law and Society course for the final time during the fall 2020 semester.

“I have taught that class or one like it every semester for 55 years at one school or another,” says Sanders, who is himself a practicing lawyer, a former South Carolina state legislator and retired chief judge of the South Carolina Court of Appeals. In addition to teaching law classes at the College, including while he was serving as the institution’s president, he has also taught at Harvard University. “The course is about the great social issues of our day. I let the class decide what those social issues are.” 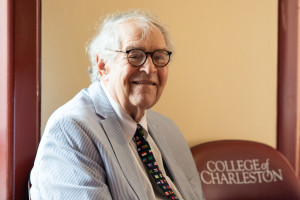 And while 2020 certainly offered up plenty of talking points about the law and society, Sanders says in his many decades of teaching, there has never really been a shortage of topics to explore within the American social and political landscape.

“It’s always been relevant,” he says of the course. “We’ve always had these intractable issues that have challenged humankind since the recording of history. Sometimes it’s in different garments, but it’s the same thing. How long have we been talking about capital punishment? Since the Middle Ages.”

He has also demonstrated his civic-minded ideals beyond the College campus. In 2002, he was the Democratic candidate for South Carolina’s Senate seat, but was defeated by the Republican candidate Lindsey Graham. He then went on to help establish the Charleston School of Law in 2003, where he served in leadership roles for a number of years. Sanders made headlines again in 2018 when he addressed Charleston City Council in support of a resolution that condemned slavery and apologized for the city’s role in the institution of human bondage.

“I think we have an obligation to do that,” says Sanders of his decision to speak out in support of the City apologizing for the role it played in enslaving Africans and people of African descent. “That’s part of the price you pay of being a citizen.”

And his egalitarian approach to politics and the law certainly played out in his presidency at CofC, where Sanders was known for letting students stop by the President’s House on a whim and more than a few times offering students $100 to quit smoking.

“I really enjoyed being the president. I really liked that probably more than anything else I’ve ever done,” he says, adding, “I came for three years and stayed for nine.”

His main focus as president, much like in the classroom, was the students.

“I wanted the campus to be unparalleled in its devotion to the students’ experience, and I think we accomplished that,” he says.

And he meant it. Literally.

Sanders continued teaching a course during his presidency and encouraged other College administrators to do the same. 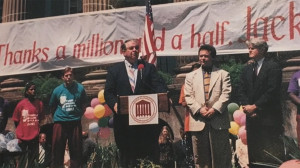 Alex sanders at a philanthropy event in the Cistern Yard during his presidency at CofC.

“I wanted all of us to have experience in the classroom so that we knew why we exist, why administrators exist – even the president – which is to serve the students in the classroom,” he says.

That philosophy meant putting students first in all ways – whether that was meeting with students at the drop of a hat or letting them hang out in the President’s House.

“If a student showed up and I had a meeting with a legislator or a faculty member, the student got to go first,” he recalls. “We kept the house open. When the shower broke in a dormitory, they used my shower. There were always students in the kitchen. When I got ready to go to bed, I had to run them out!”

Sanders was instrumental in the College’s acquisition of the property where Addlestone Library now sits, the development of the Patriots Point Athletics Complex, the Tate Center at the School of Business and the Jewish Studies Center. He also supported the creation of study abroad programs in Cuba; Trujillo, Spain; and Annot, France.

His wife Zoe D. Sanders also embraced her role as the College’s first lady and regularly hosted events for students, faculty, staff and CofC supporters. In 1998 she wrote the cookbook, Entertaining at the College of Charleston, with the goal of raising money for scholarships. Unhappy with the net profit the College would have received through a publishing contract, she worked with the College of Charleston Foundation to publish the book and then set out to sell it. 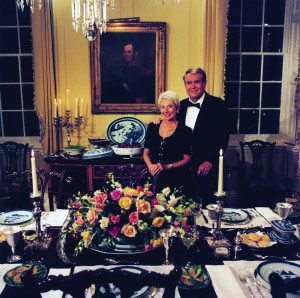 Former CofC President Alex Sanders with his wife, Zoe, at the President’s House.

“She literally sold that book out of the trunk of her car,” says Sanders, noting that the foreword of the book – which highlighted the College’s history, different properties and the culinary tradition of the South – was written by acclaimed Lowcountry writer Pat Conroy. “Everywhere she would go, she would go to the local bookstore and ask them to sell her book. It finally got to where the book was selling more in California and Texas because she personally visited all the bookstores.”

And the sales ended up generating a net profit of more than $500,000 to go toward scholarships.

At 82, Sanders – who taught last fall, providing face-to-face instruction in the midst of the coronavirus pandemic – says it’s time to slow down. He says he’ll still practice a little law with his daughter, who is also a lawyer, joking, “Let’s see what’s next. I don’t think I better sign any long-term contracts.”

Current CofC President Andrew T. Hsu says Sanders’ contributions to the CofC community continue to shape the College today and will do so into the future.

“Judge Sanders, you have played a significant role in the life of the College, and we continue your great work today to transform this once small school into a university with international reach and universal appeal,” says Hsu. “Thank you, Judge Sanders, for everything you have done for the College of Charleston. This grand institution is better for your service and your leadership.”

As far as his legacy as a seminal figure in the College’s history and development, Sanders remains modest.

Only 3️⃣ days until #NationalDecisionDay and 1