A love of teaching brought Lt. Colonel Hubert “Herb” Rentz, Jr. and College of Charleston alumna Elizabeth “Beth” Reid ’80 together, and today, that shared love is their legacy.

“Beth played such an important role in education,” Rentz says of his wife who passed away in 2017. “She is still missed by a lot of people whose lives she touched.”

Wanting to celebrate Reid’s passion for teaching and education, Rentz established the Elizabeth R. Reid Endowed Memorial School of Education, Health, and Human Performance Scholarship. Special education major Emily Terry is the inaugural recipient of the scholarship, which was  awarded in the fall of 2020. 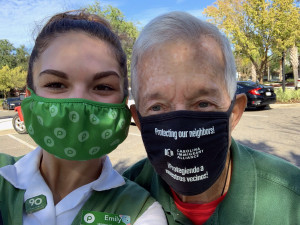 “I had absolutely no intention of pursuing education until halfway through my senior year in high school. I was taking Teacher Cadet because I thought it would be an easy ‘A,’ but when I had to choose a placement for a nine-week long field experience, I chose the special education class at Newberry High School,” recalls Terry. “Working with the students and getting to know them completely opened my heart to a love that I had for teaching that I had never felt before.”

Beth Lloyd, associate professor of teacher education, says Terry is an exemplary future educator who is dialed into the many facets and challenges within K-12 education.

“Emily is always thoughtfully and respectfully engaged in serious, sociological issues related to our past and present public school educational system,” says Lloyd. “She also always has a smile on her face, which positively impacted her working relationships and developing friendships with the other students in her class.”

RELATED: Make a difference in the life of a College of Charleston student during CofC Day, the College’s annual day of giving, on Jan. 28.

When Rentz and his future wife first met, Rentz was teaching and coaching “a little bit of everything” at Great Falls High School in Great Falls, South Carolina. He had been at the school for a few years when Reid, who majored in physical education at CofC and also played on the women’s basketball team, was hired as the varsity girls basketball coach. In addition to her coaching duties, she also taught physical education and science. It wasn’t long before the two educators were spending all their time together. Reid’s passion for education took her from teaching and coaching to counseling and eventually to becoming the head of school at Richard Winn Academy. She also served on the Board of Trustees for the Fairfield County School District where she was able to facilitate the construction of a state-of-the-art career and technology center that serves all Fairfield County students. 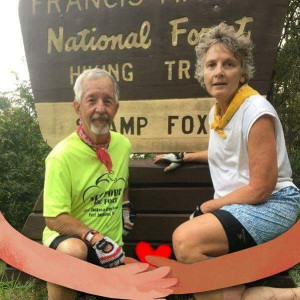 But teaching wasn’t the only thing they had in common – the South Carolina natives shared a love of coaching and spending time outdoors biking, hiking, kayaking and running. They also liked to give back to the community by participating in fundraisers and serving on a variety of local boards. During her sophomore year at the College, Reid’s physical education class participated in the very first Cooper River Run as timers for the runners. Years later, she and Rentz ran the bridge run together and continued the habit for twenty consecutive years. Family and friends now gather each year at the start line and trek the 10K course in her memory.

Rentz says his wife’s favorite song was “I Won’t Back Down” by Tom Petty, a song that took on new meaning when she was diagnosed with breast cancer in 2008. Upon learning of her diagnosis, one of the first things she did was convince her husband to get matching tattoos. It didn’t take much convincing, and the words “Keep Going” were inked onto their skin. Those words became Reid’s mantra, and the same tattoo lives on the skin of several family members and friends as a way to honor her memory.

And Reid’s passion for education will endure in scholarship recipients like Terry.

“Having the scholarship is the difference between working 20 hours a week as compared to having to work 30 or more,” says Terry who works part-time at Publix super market. Rentz event visited Terry at her job and the two became fast friends. “It’s an absolute honor to have the scholarship, not only because it’s so helpful to me financially, but because Herb is an amazing man. I’ve felt so blessed to meet him and I love that I can call him my friend.”

The Elizabeth Reid scholarship is for any major within the School of Education, Health and Human Performance (EHHP), who is a South Carolina resident. Preferences are given to Fairfield, Chester or Newberry county residents; student-athletes or those participating in intramural activities; or ROTC participants or veterans. To donate to this scholarship, please visit https://give.cofc.edu/elizabeth-reid.