By Darcie Goodwin|2021-01-27T08:47:35-05:00January 12, 2021|All News, Alumni|Comments Off on College to Celebrate 2020 Alumni Award Recipients on CofC Day
The College of Charleston Alumni Association, in partnership with the College of Charleston Foundation, will honor nine distinguished alumni on Jan. 28, 2021, as part of CofC Day, the College’s annual day of giving. The alumni awards recognize alumni who have made significant contributions to their professions or communities. Through their success, these alumni demonstrate the power of a College of Charleston education. “We are celebrating the accomplishments of these alumni because they have brought honor to our alma mater,” says Derrick L. Williams ’99, president of the Alumni Association. “It is only fitting that we recognize their achievements on CofC Day, our 24-hour day of giving in support of the future of our College.” Since the COVID-19 pandemic prevented hosting the annual Alumni Awards Gala, traditionally held in November during Fall Alumni Weekend, a pre-recorded video presentation celebrating this year’s Alumni Award recipients will premiere as part of the CofC Day webcast on Thursday, Jan. 28, 2021, from 7 to 9 p.m. Visit the CofC Day website for details. The 2020 Alumni Award recipients are: Alumni Award of Honor Otto B. German ’73 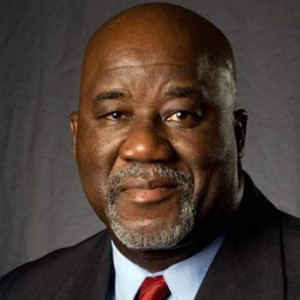 A native of Mount Pleasant, South Carolina, Otto German has been a trailblazer since his high school days when, as one of seven Black students, he helped integrate Moultrie High School. He was also the school’s first Black basketball player, and by his senior year in 1969, German was named Lowcountry Player of the Year and was an All-American Honorable Mention. At the College of Charleston, German played basketball and was a four-year letter winner. His sophomore year, he became the College’s second Black student-athlete to receive a full basketball scholarship. Upon graduation in 1973, the education major began his 46-year career at the College. Before joining athletics as the director of the National Collegiate Athletic Association (NCAA) compliance in 1992, German worked as assistant director of financial aid and veterans affairs, assistant director of student activities, assistant director of admissions and associate dean of admissions. A 2009 Eddie Ganaway Distinguished Alumni Award recipient, German served as secretary for the Board of Directors of the Avery Institute. He played a leadership role in the creation of the College’s Black Alumni Council and is its immediate past president. In 2018, in recognition of his exemplary service to his alma mater, the Alumni Association renamed its Alumni Scholarships in Athletics in his honor. Committed to his community, German served on the Parks and Recreation Commission, the Mount Pleasant Election Commission and as a recreational youth basketball and football coach. He also served as an assistant basketball coach at Porter Gaud School from 1976 to 1980 and at Wando High School from 1989 to 1992. He is a member of the Male and Adult Choir, director of the Acolytes and assistant church school superintendent at Friendship AME Church. Distinguished Alumna Award Donnetta Lavinia Grays ’99 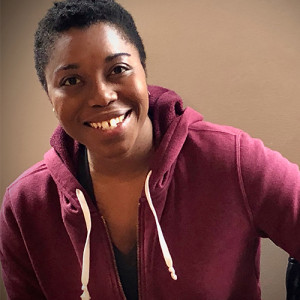 Born in Panama City, Panama, Donnetta Grays grew up in Columbia, South Carolina. She majored in theatre at the College of Charleston and graduated in 1999. She then went on to complete her M.F.A. in acting from the University of California, Irvine in 2002. Grays’ multi-faceted talent led her to excel as an award-winning actor and playwright. Her acting encompasses Broadway, film and several network television series. Her film and television credits include The Book of Henry, The English Teacher, The Wrestler and recurring roles on New Amsterdam and Law and Order.  She has had starring roles in Blue Bloods, The Blacklist, High Maintenance and The Sopranos. Grays has written seven full-length plays, which feature strong roles for women of various ages, races, sexual identities and economic standing. She made her Off-Broadway debut starring in a one-woman show she wrote called Where We Stand. The play was a nominee for both the Lortel Award and the Drama League Award. In February 2020, Grays’ play, Last Night and the Night Before, was performed on the College of Charleston campus. The Southern coming-of-age tale had its world premiere at the Denver Center for the Performing Arts in February 2019. Grays was nominated for the Helen Hayes Award and received the inaugural Doric Wilson Independent Playwright Award presented by the New York Innovative Theater Foundation, the Helen Merrill Playwright Award, the Go Work in Theater Award from The Lillys, the Broadway Black Antonyo Award, the National Theater Conference Barrie and Bernice Stavis Playwright Award, the Connecticut Critic’s Circle Award (twice) and the Young Alumni Award from the College of Charleston School of the Arts. Alumni of the Year Ranky Tanky: Kevin Hamilton ’95, Quentin Baxter ’98, Clay Ross ’98 and Quiana Parler ’01 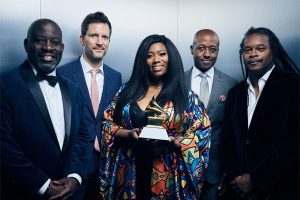 Comprised of five lifelong friends, Ranky Tanky band members have established themselves as passionate global ambassadors for the South Carolina Lowcountry culture and community. They have introduced new audiences to Gullah music and culture throughout the United States, Canada and Europe. The quintet includes four College of Charleston music majors: Kevin Hamilton ’95 on bass, Quentin Baxter ’98 on drums, Clay Ross ’98 on guitar and vocals and Quiana Parler ’01 on vocals. The fifth member of the quintet is Charlton Singleton on trumpet and vocals. Through their music, the band strives to preserve and keep alive the traditions originated by African Americans in the coastal South during slavery. The name, Ranky Tanky, comes from a Gullah phrase meaning “get funky.” Described as “soulful honey to the ears” by National Public Radio, in January 2020, Ranky Tanky received a Grammy for Best Regional Roots Album for their sophomore release, Good Time. The album, which hit No. 1 on Billboard’s Contemporary Jazz Chart, combines songs carried down through generations in the Sea Islands of the southeastern United States with the band’s original compositions in the Gullah tradition. Ranky Tanky has been covered by The New York Times, NPR’s Fresh Air and NBC’s Today Show. Recently, the issue of Oxford American South Carolina Music featured the band in a 10-page profile. Charleston City Paper named Ranky Tanky its 2020 Artist of the Year. Young Alumnus Award George Patrick McLeer Jr. ’10 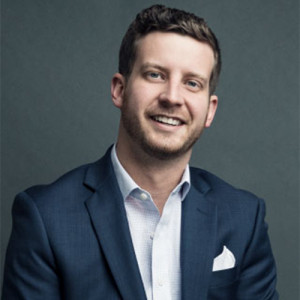 South Carolina native, George Patrick “GP” McLeer Jr., obtained his B.A. in arts management from the College of Charleston in 2010. Upon graduation, he created and led the Office of Cultural Affairs for the City of Mauldin, South Carolina, where he leveraged the community’s cultural and artistic assets to promote economic development and improve the quality of life for its citizens. He then went on to develop the Mauldin Cultural Center, the Mauldin Public Art Trail, the Railroad Concert Series and managed all city-wide marketing. In November 2019, at the age of 31, McLeer was elected mayor of Fountain Inn, South Carolina, making him the youngest mayor in the city’s history. Having previously served as chair of the Fountain Inn Chamber of Commerce, Mayor McLeer brings a fresh perspective to the city’s government and fosters a sense of community. At the same time, he serves as the executive director of the South Carolina Arts Alliance, the only state-wide arts advocacy organization. His goal is to ensure all South Carolinians have access to quality arts experiences and education. McLeer serves on the Board of Palmetto State Arts Education, the College of Charleston School of the Arts Council and the Arts in Basic Curriculum Project. He is vice chair of the State Arts Action Network, a national coalition of statewide arts advocacy organizations. McLeer received the 2016 School of the Arts Young Alumni Award and the Julie Jett Arts Management Citizenship Award. He was named to the School of the Arts Hall of Fame and is the first recipient of the Alumni Heart Award from his high school alma mater, St. Joseph’s Catholic School, in Greenville, South Carolina. Howard F. Rudd Jr. Business Person of the Year Vic Howie ’83 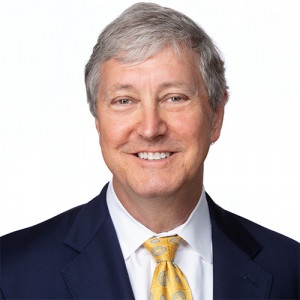 Based in Charlotte, North Carolina, Vic Howie is founder, creative director and past chairman of the U.S. National Whitewater Center and managing director and first vice president of Introspect Wealth Advisors, a Raymond James-based team. An active member of Kappa Alpha and the Interfraternity Council, Howie received his business administration degree from the College of Charleston in 1983. He then went on to earn his MBA from Western Carolina University and a European Management Certificate from Hogeschool Brabant School of Management and Economics in Breda, Netherlands. Prior to joining Raymond James, Howie was with Bank of America and Merrill Lynch for 29 years. At Bank of America, he served as the consumer marketing executive for the Charlotte region and as marketing executive for the National Municipal and Public Finance and Commercial Banking Divisions. He also had a two-year stint as Chief Operating Officer of a NASDAQ-traded regional bank holding company. Howie founded Pitch Breakfast, a monthly event in Charlotte, Asheville and Davidson, North Carolina, where start-up companies practice their investor pitches in front of a live audience and receive feedback from successful entrepreneurs and investors. He also served as chairman of the Charlotte Regional Film Commission for several years. Dedicated to his alma mater, Howie has served on both the College of Charleston Alumni Association and Foundation Boards. Pre-Medical Society’s Outstanding Service Award in Medicine Susan Olson Hilsman ’83 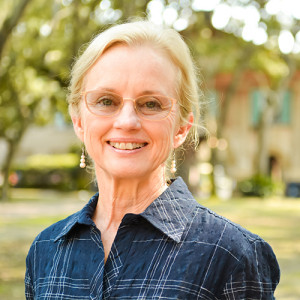 Susan Olson Hilsman grew up in Irmo, South Carolina, and graduated from the College of Charleston in 1983 with a B.A. in German. Her sophomore year, she traveled to Germany to live and work on a dairy farm in Bavaria. Also, while at the College, she was Student Government Association president and received the prestigious Bishop Robert Smith Award. Upon graduation from CofC, Hilsman completed medical school at the University of South Carolina. While in medical school, she was an exchange student at Oxford University in England. Following her residency in Spartanburg, South Carolina, Hilsman worked as a staff physician in Spartanburg’s Level One Emergency Department (ED), caring for all aspects of traumatic, medical and cardiac emergencies. In 2002, she began a hybrid career: she began dividing clinical time in the ED to include work in the Wound Healing Center. She completed additional training in hyperbaric medicine and wound healing. Since 2016, she has practiced exclusively in the Wound Center. Hilsman’s career highlights include serving as chair of the Emergency Department; the first female chief of staff of Spartanburg Medical Center; chair of the Credentials Committee; and president of Spartanburg Women in Medicine. She volunteers at St. Matthews Free Clinic and works with medical students at Edward Via College of Osteopathic Medicine in Spartanburg. She serves on the Board for the Academy of Physicians in Wound Healing; Spartanburg’s Hub City Farmers Market Board, which promotes health and wellness for the local community; and the College of Charleston’s Board of Advocates for the School of Sciences and Mathematics.