The work of Charissa Owens has never been more vital. As the director of diversity education and training in the College of Charleston’s Office of Institutional Diversity, she helps make sure campus is as inclusive and cohesive as possible. And while the death of George Floyd last May and the Black Lives Matter protests last summer made her training sessions more urgent than ever, the pandemic also made her job more difficult. Owens, however, didn’t miss a beat.

“The sessions actually became stronger,” she says. “We were able to endure all the pivoting and the whirlwind of the racial and social injustice that was happening.” 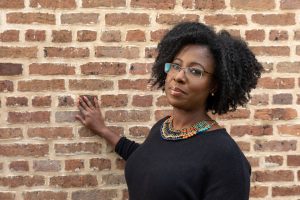 Owens was just trying to do her job and do it well, but others took notice, which is why the Black History Intercollegiate Consortium (BHIC) – comprised of CofC, the Medical University of South Carolina (MUSC), The Citadel, Trident Technical College and Charleston Southern University – will honor Owens with a MLK Humanitarian Award at its 31st Annual Martin Luther King Jr. Celebration on Tuesday, Jan. 19, 2021. With CofC’s Chief Diversity Officer Rénard Harris delivering the opening remarks, the College will host the virtual event from 6:30 to 8 p.m. at go.cofc.edu/MLK.

Owens is one of five faculty and staff from the BHIC schools who will receive an MLK Humanitarian Award, and since CofC is the host institution, this year’s BHIC scholarship recipient will be a CofC student – freshman communication major D’Asia Thompson, who will receive a $500 scholarship for academic excellence, commitment to service engagement and service on campus.

“We felt Charissa was deserving of this year’s award because of her various contributions to advance equity and inclusion on campus, be it through her creative diversity training methods, or her ongoing mentorship of female students of color,” says Kim Gailliard, the Office of Institutional Diversity‘s program coordinator who selected Owens for the honor along with Admissions Counselor Iesha Steele. “She’s also played an active role in improving conditions for staff through her service on the Staff Advisory Council to the President.”

“Daily, she demonstrates her commitment to equity and inclusion at the College of Charleston by providing D.E.E.P. (Department Equity Education Program) training sessions campus wide to faculty, staff and students. In addition, she led her team in creating the film, If These Walls Could Talk, which takes an in-depth look at CofC and African Americans’ contributions to tell a more complete story of the institution,” says Harris. “Her desire to bring recognition to African Americans who have contributed to the institution is not only important to tell the full story, but also it is important because we want our students to know of the multiple and varied hands that built this college.”

And Owens approaches much of her work from the context of the United States’ complex and difficult history of racial and social injustice. In fact, when Floyd died at the hands of police last year, the first thing Owens did was re-read some of King’s writings, like his “Letter From a Birmingham Jail,” where he famously outlined his four steps for nonviolent resistance, so to be honored with an award that bears his name and embodies his ideas of equity, inclusivity and justice is pretty special. 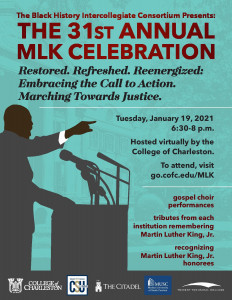 “At first I was like, Wow, somebody is recognizing the value I bring to the campus, but then I took a step back and said that this is really recognizing the people on whose shoulders I stand,” she says. “My voice is honestly that of those before me who wanted to speak but couldn’t, or they’ve been speaking up for centuries but never had the platform to do it. It’s not so much about me as me being the mechanism in which diverse voices are heard unlike before.”

Born and raised in Miami to a mother who was a social worker and a father who played bass guitar in his own reggae band (“so I come from humanity and creativity”), Owens received a doctorate in special education and teaching from the University of Central Florida in 2007. She arrived at CofC that same year to take a position in the Department of Teacher Education and, after serving in a variety of different roles, became director of diversity education and training in 2018.

“I did not know communities could still be so divided until I moved up here to what is called the South,” she says. “Florida is much more a mix of culture and language. It was definitely a culture shock when I moved here. I saw a lot of diversity resistance and an effort to keep things the way they were.”

The crux of her training sessions is that nobody is born racist. What we learn, we can unlearn. But talking about race or any other taboo topic can create a divide and polarize people, so the first step is to become mindful of that.

“People need to understand that those conversations are challenging,” she says. “There’s going to be conflict but that doesn’t mean that your family members or close friends can no longer be family members or close friends. It doesn’t have to be that polarizing. Once they start to see it in that light, then conversations start to happen. There’s a better understanding of the unification that these conversations can create versus the division that we’ve been told they create.”