During early discussions about creating the School of Languages, Cultures, and World Affairs (LCWA) at the College of Charleston, one of the key initiators, local entrepreneur Hilton Smith, tapped the expertise of his friend, John Edwin Mroz, founder of the EastWest Institute, to play a leading role in the creation of the new school and its global focus.

With the help of Mroz’s international vision, LCWA opened its doors in 2006. Now Mroz will be honored as the namesake of the new John Edwin Mroz Global Leadership Institute (Mroz Institute) housed within LCWA. The EastWest Institute’s Board of Directors has committed more than $2 million to form the Mroz Institute in partnership with the College to preserve the legacy of the EastWest Institute’s (EWI) visionary founder and leader. In addition, long-time EWI supporters, the late Marshall and Arlene Bennett, have committed nearly $500,000 through the Bennett Family Foundation to support the newly formed Mroz Institute and its director. 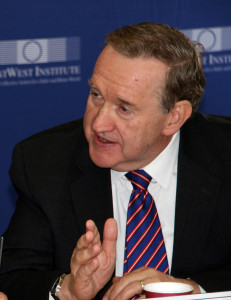 Founded by Mroz in 1980, EWI operated as an independent, global organization that promoted peace by facilitating candid discourse among world leaders to solve sustainable solutions for major political, economic and security issues. Mroz served as president and CEO of the institute for 34 years until his death in 2014.

EWI’s storied record of backchannel or “Track II” diplomacy and dialogue came to the forefront during the Cold War. The institute’s initial success included hosting the first-ever military-to-military dialogue between NATO and Warsaw Pact countries. From these roots as a European-American initiative to bridge the divisions between Europe and Eurasia, Mroz built EWI into one of the world’s preeminent non-governmental institutions.

“For 40 years, EWI has been recognized around the world as an independent, trusted adviser driving meaningful dialogue and building trust between global leaders,” reflects EWI Chairman of the Board Ross Perot Jr.

Now EWI is transitioning its programs to other entities, including to the College where LCWA will ensure that the spirit of Mroz and the mission of EWI endure for generations to come.

“John played a key role in developing, with others at the College, the idea of a school that would focus on world affairs, realizing that a key to problem solving on the global level was also understanding various cultures and languages,” says Karen Linehan Mroz, EWI board member and wife of EWI’s late founder. “He believed it critically important to teach future generations of leaders and problem solvers to serve at the global level. When it came time to find a home for John’s and EWI’s legacy, the College and LCWA offered a natural partnership. Of great importance will be both the engagement and further development of the global EWI alumni family of experts and luminaries to engage in the education process.”

As part of the Mroz Institute, the College is creating a permanent repository for materials documenting EWI’s four decades of international diplomacy. The records and materials — including oral histories from EWI’s alumni network of policymakers, donors, board members and staff — will be available to students and scholars.

RELATED: Tune in to CofC Day to learn more about EWI and the new Mroz Institute.

In addition, the institute will provide students the opportunity to develop high-level international skills necessary for lifelong careers of global impact. The institute will also promote the legacy and values of EWI and Mroz, educating new generations in the methods and benefits of Track II diplomacy. It will also sponsor research and scholarship on the history of Track II diplomacy with a special focus on EWI’s history and will maintain EWI’s global network of influence.

“The College is a good home for the EWI legacy,” says Jonathan F. Fanton, eminent nonprofit leader and former president of The John D. and Catherine T. MacArthur Foundation. “The Mroz Institute will train a new generation of leaders in the art of Track II diplomacy, and it will bring together scholars and practitioners to document past, present and future Track II dialogues that prevent and limit dangerous conflicts.”

The formation of the Mroz Institute will position LCWA and the College as a hub where students prepare for careers and leadership roles in our globally connected world.

“We are so excited to partner with the EastWest Institute to establish the Mroz Global Leadership Institute, the EWI Distinguished Visiting Fellows Program and the EWI History Project,” says College of Charleston President Andrew T. Hsu. “This great partnership will allow for significant expansion of the College’s international education and experiential learning opportunities for all students on campus. The Mroz Institute also creates an area of academic distinction for the College, a key component of our institution’s new 10-year strategic plan, Tradition & Transformation, with the overall goal of making the College of Charleston a transformative national university redefining liberal arts education through innovation.”