Above: Bernard Powers, director of the College of Charleston’s Center for the Study of Slavery in Charleston, talks during the dedication of a historical marker highlighting the domestic slave trade at locations in the City of Charleston.

When Charleston native Margaret Seidler decided to create a historical marker to illuminate her family’s role in the slave trade at a downtown Charleston building, she reached out to the College of Charleston’s Center for the Study of Slavery in Charleston (CSSC) for help in finding the right words to share that difficult history.

The resulting marker, which was dedicated at 34 Broad Street during a small ceremony last month, acknowledges the role Seidler’s 4th great-grandfather William Payne and his business William Payne & Sons, played in the sale of more than 9,200 local enslaved people between 1803 and 1834 at that location. Following Payne’s death, other Charleston businessmen continued the domestic slave trade at that site until the Civil War. 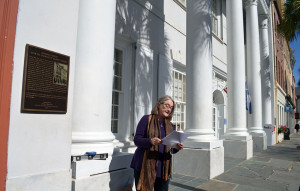 Margaret Seidler talks about her family’s history in the domestic slave trade in Charleston during a ceremony dedicating a historic marker.

Seidler, who discovered her family’s involvement in the slave trade while doing research in 2018, decided a historical marker was the most effective way to share these “truths which have been hidden from sight.”

“While understanding I was not responsible for my ancestors’ actions, I do take seriously the responsibility of revealing a more accurate history to raise awareness and encourage racial healing,” she said during the dedication ceremony.

And serving as a conduit for telling a fuller story of the Holy City’s role in the practice of slavery and aiding in racial reconciliation is exactly what the center was created to do, said Bernard Powers, professor emeritus of history and director of the CCSC. With the center serving as an official sponsor of the marker, Powers and Julia Eichelberger, director of the College’s Southern Studies Program and a member of the CSSC’s executive board, provided research guidance to Seidler and assisted in crafting language for the marker.

“We had the opportunity to see the marker as it was being developed and we were able to give her feedback on how it read and to make sure it told the story fully, as she wanted it, and that it was told in a way that lines up with academic understandings of this period,” said Eichelberger. “Plus, we wanted to be thinking about people today and what they need to understand – the passerby on the street – what we would like them know.”

The sign makes clear the history of the location, reading in part: “At this site, sometimes acting as agent for the City Sheriff to collect court-ordered debts, Payne brokered the sale of more than 9200 local enslaved people. … At his largest sale in February 1819, Payne sold 367 enslaved human beings belonging to the estate of planter John Ball, who were valued at approximately $6.5 million in 2021 dollars.” 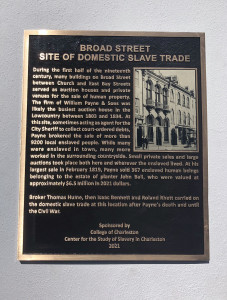 The Center for the Study of Slavery in Charleston sponsored a historic marker erected at 34 Broad St.

Powers said the center is working on an interpretive signage project for CofC that aims to more fully tell the African American heritage and history tied to campus buildings. He is also, through the center, assisting other businesses, property owners and Charleston residents who are interested in how to share their family’s or institution’s role in the domestic slave trade in Charleston.

“We’re already working with different people in different places around the city, encouraging them to recognize the past of their relatives or institutions that they are associated with,” said Powers. “There are other institutions in this city that have similar revelations that they have discovered and they’re trying to figure out now how to deal with that and what to do and what the path forward is.”

Eichelberger hopes that in leading by example and shining a light on the College’s connections to slavery, the center can begin to do the same for Charleston as a whole.

“We’re researching CofC’s properties for the signage project at the College and we would like to partner with the city on other public history projects in the larger retelling of our story and understanding more deeply what our story really consists of, who is involved and how we’ve all influenced one another,” said Eichelberger.

And having more honest dialogue, said Powers, is what it will take to ameliorate the pain of that history.

“Many people, when they discover this aspect of their family, of their genealogy, they would run away from it. They would hide. They would bury it, but that’s not what Margaret did,” said Powers in remarks during the dedication ceremony of the marker at 34 Broad Street. “She spoke up to take this dark cloud and bring it to the light. That can liberate people. That can educate you. That can challenge people and make them better.”

Looking back at the marker, he added, “When I see this, this is the antidote. This is healing.”

Tagged with: center for the study of slavery in charleston • homepage-feed