In 1934, Emmett Robinson ’35 won the College of Charleston’s Robert Worth Bingham Oratorical Contest. An annual tradition dating to 1907, the speech competition, judged by a panel of College faculty, identified the best student rhetorician. Robinson’s winning speech, which celebrated the value of music in our daily lives, continues to ring true today.

“With so many devices to make life less of a drudgery we ignore striving to new heights and lapse into servitude to Common Sense,” he wrote. “Securing the necessities of life so overwhelms us, that we forget to live.” 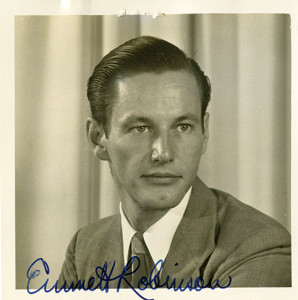 When he wrote his speech, he was deeply ensconced in CofC’s theater department. He performed in several plays his freshman year and by the time he was a junior – the year he won the oratorical contest – he was directing them. Robinson would later become a leader in Charleston’s local theater community.

In recognition of his contributions to theater at the College and in Charleston, several of his colleagues established the Emmett Robinson Memorial Scholarship in Theatre to honor a rising senior theatre major with a distinguished record of leadership and artistry.

“As a student, as an artist and as a member of the Charleston community, Emmett Robinson was the embodiment of a liberal arts educated theatre person,” says Todd McNerney, professor of theatre and associate dean of the School of the Arts. “He was an actor with immense talent, a director and artistic director of even greater, and a designer of even greater still. As such, the scholarship in his name has come to recognize the very best of our senior theatre majors — individuals who emulate Emmett’s commitment to the totality of theatrical art and to superior effort across that totality. There is no higher honor for our theatre majors than to be named the Emmett Robinson Scholar.”

After graduating from the College, Robinson went on to be the theater director of the then brand-new Footlight Players, “Charleston’s Little Theater.” Robinson more than doubled the membership in his first few years, but deflected any praise, saying that the theater was run by volunteers who not only acted, but also built scenery, managed the lights and sounds, sewed costumes and sold tickets. In 1938, Footlight Players and Carolina Art Association (now known as the Gibbes Museum) merged to take over the Dock Street Theatre, and Robinson stepped in to direct, working closely with the resident playwright Dubose Heyward (author of Porgy and Bess).

Determined to better serve community theater, Robinson went on to earn an M.F.A. from Yale University’s Department of Drama. Returning to Charleston, Robinson threw himself back into the Little Theater, where he served as director until he retired in 1977.

He began teaching at the College in the 1960s – something that, according to his daughter, Jennet Robinson Alterman, “lengthened his life.” To honor his many achievements and contributions to his alma mater, in 1971, the College of Charleston awarded Robinson the Honorary Degree of Doctor of Letters, describing him as a “present day reincarnation of the versatility of a Renaissance man.”

“Being awarded the Emmett Robinson Scholarship was perhaps the greatest honor of my career at CofC,” says Michael Smallwood ’09, who is now an actor, podcaster, critic, award-winning playwright and filmmaker. “That stage means so much to every artist who passes through the CofC theater department. I was eventually married on that stage – that’s how much that space meant to me. It’s the highest achievement professors can bestow upon you. It marks you as not just an exceptional student, but an ambassador of the department. And so for me, it was and continues to be this great motivator. Receiving the scholarship boosted my desire to prove myself as the best of the best.”