In recognition of Black History Month, The College Today is highlighting African American students, faculty, community members and institutions that have made an impact at the College of Charleston.

South Carolina attorney Derrick Williams ’99 has always been a natural leader. During his years at the College of Charleston, his focus, drive and determination led him to excel both in the classroom, where he earned academic scholarships and was a member of what was then the Honors Program, and on the running track as a top competitor with athletics scholarships.

A native of Florence, South Carolina, Williams was among the first Black cross country runners at the College. At 29, he became one of the youngest judges ever appointed to the South Carolina Workers’ Compensation Commission. And last year, Williams, who graduated from the College with a degree in English, made history at his alma mater when he became the first Black president of the College of Charleston Alumni Association. 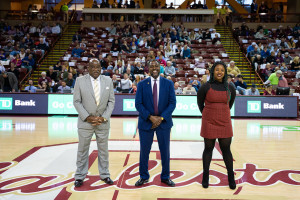 It’s a mantle that Williams is proud to hold, but one that he says carries a lot of weight as the College and the country wrestle with social justice issues and issues of equity and inclusion.

“I am so honored – this is literally one of the greatest honors of my life to be the College of Charleston Alumni Association president,” says Williams, noting that he follows in the footsteps of the “brilliant” and “accomplished” Black alumni who came before him. “I think everything happens for a reason in our life. Thinking about what has happened in our country over the last year, what better time for me to be serving than at a time like this – being the first one in this spot dealing with these issues.”

He adds, “I’m somewhat glad we’re having these hard conversations because we cannot change anything – things have been papered over for so long – without shining a light on these challenges. I’m hopeful, very hopeful, that we can now start to move things forward.”

You might say that moving forward is one of his specialties. After all, Williams was a fast runner during his days at CofC, where he rose to serve as captain of the cross country team his senior year. 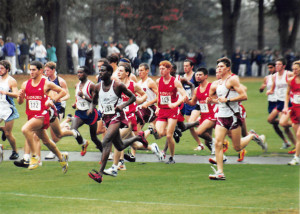 Derrick Williams competing with the CofC cross country team while he was a student in the late 1990s.

“I wanted to be good at it, I wanted to push my abilities to the limit. What I had to learn, though, is that there is such a value in team, and leading a team is more than just being the No. 1 runner,” says Williams of his journey to becoming team captain. “You have to do certain things to help other guys along and lift them up. I learned more than just leadership, I learned the importance of connecting with people rather than just leading by example.”

While at the College, he also learned the value in listening to advice. And so, after his initial interest in a medical career had begun waning, he was open to his academic advisor’s  suggestion that he change his major from chemistry to English and consider going to law school.

“I didn’t quite know I wanted to be a lawyer, but I knew law school would provide options for me,” says Williams.

He went on to earn his law degree from the University of South Carolina School of Law and then began a career handling all aspects of workers compensation claims. Williams served on the South Carolina Workers’ Compensation Commission from 2007 to 2013, before joining the private practice of Mickle & Bass in Columbia, where he has worked for the past eight years representing people injured at work.

Williams’ career may have been busy over the past 18 years, but he has found time for the College – serving on the Honors College Advisory Board and the College of Charleston Foundation Board. He also served as an Alumni Association Board member for seven years before rising to the organization’s top post. 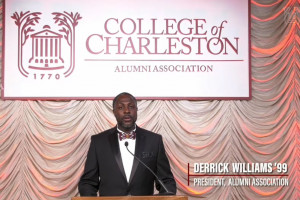 Derrick Williams presents the annual alumni awards during a livestreaming event on Jan. 28, 2021.

With that experience, a friendly demeanor, even temper and gentle Southern drawl, Williams is comfortable in his newfound role as a CofC statesman.

His main goal as Alumni Association president is to increase engagement with all alumni. As part of that effort, the Alumni Association began launching affinity groups – aimed at engaging alumni who share identities, experiences, interests and/or goals – under its umbrella last fall.

“I want all alumni who want to be involved, to be a part of the College – and if you identify with a certain group, and that interests you more, that’s fine,” Williams says, adding that the Black Alumni Council has been brought in as an Alumni Association Affinity Group, and that new groups for Hispanic/Latinx alumni and LGBTQ+ alumni are in the works.

“One of the things I’m very interested in is making sure our minority alumni are involved and that we grow those numbers,” continues Williams, noting that some Black alumni may not be engaged with the College simply because they haven’t been asked. “We are at a time period where you can have a voice. People want you involved. People want you to give us ideas. Maybe you have a better idea of how we can run things. If I can help accomplish that, growing involvement from our minority alumni, while at the same time growing involvement from our full alumni base – because it kind of goes hand in hand – I would love to do that. We’re stronger when we’re all together.”

Indeed, Williams is open to any and all suggestions and advice that CofC alumni have. After all, being flexible and open to taking new paths is what led him to the College of Charleston in the first place.