(Above, l–r): Brittany Lavelle Tulla (architectural history) and her mother Bea Lavelle (exercise science) are both adjunct faculty members at the College of Charleston.

Whether they’re intellectual or international, personal or professional: The connections we make at the College of Charleston are pretty special.

As adjunct faculty members – Bea Lavelle in the Department of Health and Human Performance and Brittany Lavelle Tulla in the Historic Preservation and Community Planning Program – both have been connecting with their students, their community and their colleagues since they first came to the College.

And now they’ve connected with their long-lost Italian relatives, too.

“Brittany really got us to the spot where we could locate them – she got us here,” says Bea, who first started teaching Personal and Community Health in 2013 and has since written and taught the Special Topics course, Food as Medicine, and is currently working to create a first-year seminar called In the Mood for Food, about the gut-brain connection.

Brittany – who started teaching at the College in 2014 – enjoys sparking an appreciation for historic preservation and architecture in her students and connecting them with the past.

“My passion is architectural history, but – to me – architecture is so much more than buildings. I humanize old buildings and places. To me, they take on the lives of the people who built the structure and the people who have lived there,” says Brittany, who earned her M.S. in historic preservation through the College’s collaborative program with Clemson University before establishing BVL Historic Preservation Research, where she serves as lead architectural historian. “It’s the history aspect of historic preservation that intrigues me.”

Which is why she began looking into her ancestral history, digging through genealogy and immigration records to piece together the lives and history of her own family. It wasn’t until her parents discovered a collection of letters in a family member’s storage unit, however, that things started to coming together. 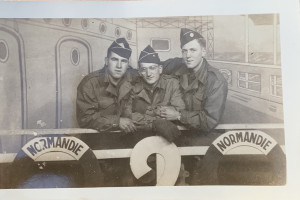 Benny Ventura (center) at a carnival in France in 1945, a few weeks before he was shot and killed. Benny is Bea Lavelle’s uncle and Brittany Lavelle Tulla’s great uncle.

Most of the letters were from her great uncle Benny to his parents, Brittany’s great-grandparents. During his three-month WWII tour of duty, Benny had written almost daily – from the time he enlisted in the Army at the age of 19 to when, only two months into his deployment, he was killed liberating France.

“The letters address what he missed from home – his mom’s cooking, their daily routines and traditions – all juxtaposed with descriptions of him fighting in the war,” says Brittany, who was so inspired by the multilayered and multifaceted stories the letters tell, she plans on sharing them in a future book.

But Benny’s letters weren’t the only source of inspiration in that storage unit. In fact, it was the stack of letters written in Italian and addressed to Brittany’s great-grandmother Sebastiana that really set this story into motion. 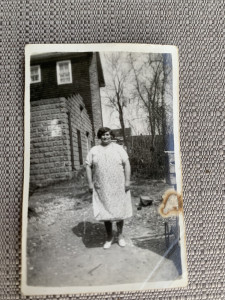 Sebastiana Ventura (1887-1950) on Staten Island prior to World War II. Sebastiana – who is Brittany Lavelle Tulla’s great-grandmother and Bea Lavelle’s grandmother – immigrated to the U.S. in 1913.

Sebastiana had left her family in the Sicilian town of Paterno when she and her husband Francesco immigrated to America in the early 20th century. The couple settled in Staten Island, where they raised their four children – including Bea’s father, Achille, and his brother Benny – creating the American family that Brittany and her mother have come to know and love.

What they didn’t know was what had happened to the family that their ancestors had left behind. So, when they found Sebastiana’s letters from one of those ancestors – Sebastiana’s only sister, Maria – they were determined to find out.

Neither Bea nor her daughter could read Italian, but – lucky for them – one of the letters listed the names of Maria’s children. With that information, Bea reached out to a Sicilian tour operator she knew, who promptly put out a query on the Paterno Facebook page.

“All she did was post the names of Maria Prezzavento’s children, asking about descendants, and BAM! All of a sudden, we were getting messages from cousins on Facebook!” says Bea, who soon learned that all of Maria’s descendants had many children. “It was so easy to find the relatives with social media and all the clues in the letters.”

The more Bea’s long-lost cousins reached out, the more she knew it was important for her to learn enough Italian to communicate. And so, in the fall of 2020, she audited an Italian 101 class with Adjunct Italian Studies Professor Kate Greenburg, and is continuing her studies this semester, auditing Italian 102 with Adjunct Italian Studies Professor Marinella Griffith.

“I’m learning, and I’ve learned enough to be able to speak a bit with my cousins,” says Bea, adding that – in addition to helping her connect with her family in Italy – the classes have helped her connect with her students. “I tell you, it’s been priceless getting to see what it’s truly like being a current day student. Just flipping the teacher-student perspective has given me a lot of insight into our students’ experience in the classroom. And, I’ve got to say, our students here at the College of Charleston are incredibly adaptive and dedicated.”

Eventually, Bea began communicating with her family regularly through Facebook Messenger, and, when her cousins suggested a video chat, she jumped at the opportunity.

“Oh, that was so great – and we were all really excited. They were so genuine, and the whole experience felt so organic,” she says. “When the video turned on, all of a sudden we were in my cousin’s kitchen in Italy. There were so many relatives in the one little kitchen! Everyone was so festive and welcoming. It was a real-life portrait of a Sicilian family. And, with the little bit of Italian I knew and the little bit of English they knew, we had a wonderful time together. It was great fun!”

The fun has continued between the two sides of the family, with Brittany and her sister joining in on video chats, as well.

“It’s really just been a great celebration,” says Brittany, adding that she and her immediate family plan to meet their Italian relatives in person as soon as travel restrictions are lifted. “It’s just so amazing that one day we’ll be getting all of our living relatives together – all the people who came from the one sister who stayed and all the people from the one who left.”

Both Brittany and Bea thank their ancestors – and the letters they kept – for reuniting the family.

“They left it all for us to discover,” says Brittany. “To find the letters and then to get to piece together the puzzle was just such a gift to us, and to the whole family.”

“It’s as if the letters were their way to speak to us and bring us together,” agrees Bea. “We were totally lost from that part of our family, and now we’re connected.”