While many of Generation Z spent the past year mastering TikTok dances or becoming YouTube stars during the COVID-19 pandemic, College of Charleston senior Jesse Shafer prepared to put out his first jazz album — an exciting milestone for any budding musician.

Shafer, along with three fellow musicians (also College of Charleston attendees), formed The Rooibos Quartet. As a music major with a concentration in jazz, Shafer plays guitar in the quartet with pianist Tyler Sim ’17, who majored in arts management, bassist Fisher Wilson ’19, a music major, and drummer Kain Naylor, who attended the College from 2006 to 2009. While working at a local music store, Shafer met Naylor, and the duo decided to perform around town. Wilson joined the group next, and one evening during a restaurant gig they were paired with Sim, and the quartet was complete.

The Rooibos Quartet’s first album, named Rooibos, draws inspiration from the unique experiences of living in the Holy City with a blend of contemporary and classic jazz styles through a laid-back Southern demeanor. The first song, “A Trip Around The Sun,” is a piece that Shafer shaped over the course of a year, its dynamics mirroring seasonal variations in brightness and darkness. 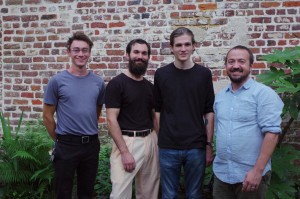 Shafer had been collecting and crafting the songs on the album for over the past four years. The group recorded the songs prior to the pandemic at Rialto Row Studio in downtown Charleston with producer Wolfgang Zimmerman. Picked up by New York-based music label Sunnyside Records, Rooibos dropped on Friday, Feb. 26, 2021. The group celebrated the album’s release with two performances at Forte Jazz Lounge Friday evening.

“Jesse wrote some beautiful tunes and put together a great group,” says Naylor. “I am honored he asked me to be a part of this project. I like to think of albums as a snapshot of where a musician is in their journey. I think it is great to have this recording to reflect back on where I was on my path, and give thanks to how I’ve grown as a person since that weekend.”

“Being a part of this band is sort of indicative of what it is to be a musician in the improvised music/Black American music tradition, which is coming together to spontaneously create,” says Sim. “I’d played with Fisher pretty frequently before, but never played with Kain or Jesse until we were all on a restaurant gig together. The beauty of it is that Jesse was able to approach us with these songs he’d written, and we could collaboratively bring them to life. This is directly tied into my favorite part of being in the band, which is just having another vehicle to explore music creatively and in a fresh setting. Every ensemble you play (improvised music) with, there will be a different approach to music and the creative process, so I’m thankful for another outfit I am able to explore with.” 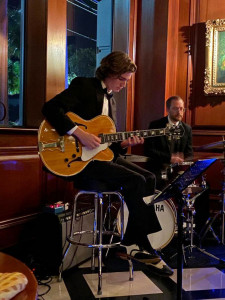 Jesse Shafer performing at Grill 225 in Charleston in 2020.

Originally from Nashville, Tennessee, Shafer has played guitar since the age of six. His family moved to Charleston when he was in the sixth grade. He originally chose to attend Belmont University back in Nashville, but when he saw all the amazing things his music friends back in the Lowcountry were doing, he decided to transfer to the College of Charleston. The abundance of opportunities to perform and the one-on-one time with the CofC professors ultimately led Shafer back.

“The professor that has been the most important to my education is jazz guitar instructor Tyler Ross,” says Shafer. “By the time I graduate, I will have taken a total of 23 various semester-long courses with him. Likewise, the entire jazz department (Robert Lewis, Frank Duvall, David Heywood, Gerald Gregory and Ron Wiltrout) have all been key in my education. I will also say that composition professor Dr. Yiorgos Vassilandonakis pushes my limitations of writing music and I have learned a wealth of knowledge from studying under him.”

And that training from his CofC music professors definitely shaped the compositions on Rooibos. For those who may not think they like jazz, Shafer says this is a more modern take on the genre.

“It is my hope that people see this album as a stepping stone into a new generation of jazz, utilizing styles both new and traditional. I would love to see other budding artists play and be inspired by these songs,” says Shafer. “My dream is not to have a grandiose career of creating ‘hits,’ per se, but to give inspiration to people to pursue music for themselves, in a similar way that I was inspired by artists when I was younger to pursue this career.”