Above: Arts management major Jake Zinn ’20 founded the app Beepr, which ranked No. 22 in the U.S. in January 2021 on the Top Music App Charts in the Apple Store.

In high school, Jake Zinn ’20 loved to follow his favorite music artists online, but he grew overwhelmed by the amount of content being thrown at him every day. He couldn’t keep up with the streaming services, music blogs, social media sites and more. He wanted information about his favorite artists at his fingertips, but when he tried to explain what he wanted his efforts fell flat.

When he came to the College of Charleston, he took an introduction to the music industry class with Mark Bryan of Hootie and the Blowfish. In class, he heard a student complain about the challenges of finding the latest information about musical artists — exactly what he wanted. Game on. 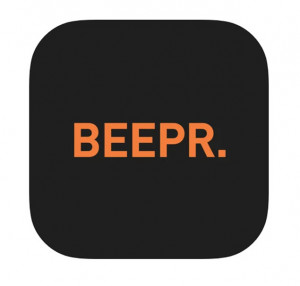 Zinn decided to create an app but he had no idea how to do it. He reached out to Bryan for guidance.

“I brought a non-disclosure agreement for him to sign before I shared my idea,” laughs Zinn. “Of course, he didn’t sign it, but he did introduce me to a Charleston boutique firm called That Level.”

That Level, owned by alumnus Will Willis ’08 and Josef Myers, who attended CofC from 2006-2009, helped Zinn articulate exactly what he envisioned so they could make his concept a reality.

At the same time, Claire Long, director of experiential learning for the Arts Management Program, and Heather McDonald, visiting instructor for arts management, provided Zinn with guidance on the business side of the music industry.

“They helped me think about how I wanted to create and market the app,” says the arts management major with a music industry concentration. “My business model was in constant development with new ideas for revenue streams and opportunities. I am extremely grateful to them.”

“I knew Jake throughout his time at the College,” says McDonald. “He was in four of my music industry classes and would hang out after class to talk through his plans. He would also share his concept with the class to get feedback.”

It wasn’t just in the classroom that Zinn took full advantage of the opportunities at the College. He frequently met one-on-one with his professors to grow his business concept. He also spent three weeks in Sweden on a music industry creative trip and interned with the Charleston Music Hall.

“Jake really took full advantage of everything at the College,” says Long. “His CofC experience gave him a holistic approach to the industry. In addition to what he learned on campus, he experienced working on the songwriting and production side of the industry during his study abroad program and learned the ins and outs of operating a music venue at the music hall.”

While at the College Zinn developed his business name — Beepr, a name synonymous with alerting people. Based on feedback, he built out the app so that users can choose the artists they want to follow and what alerts they want to receive: new music, music videos, interviews, shows and/or news.

“The guys all signed up for the app; they really are a group of supportive people,” says Zinn. “They helped with reviews and introduced me to contacts.” 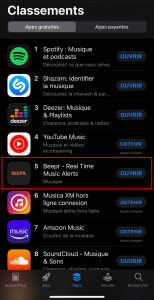 In November 2020, Beepr ranked No. 5 in France on the Top Music App Charts in the Apple Store.

In fact, one of Zinn’s fraternity brothers, Sam Turner, a senior communication major, took his support one step further, joining as a marketing assistant for Beepr.  When he graduates this spring, he’ll work full time for the fledgling company.

The business model Zinn developed at the College is what he continues to use today — gain as many users as possible. Since his graduation from CofC in 2020, he has gained more than 60,000 users, with Beepr placing in various music app charts worldwide including hitting No. 5 in France in November 2020 on the Apple Store’s Top Music App Charts and No. 22 in the U.S. in January 2021.

“The app is most powerful when it has more than 100,000 users,” explains Zinn. “It unlocks new possibilities for new revenue streams and software development.”

His greatest surge of users came after a music blogger in France posted about Beepr.

Now Zinn is collaborating with music bloggers in other countries.

“Jake has a combination of industry knowledge and business acumen so I expected him to be successful,” says McDonald. “The environment for apps like this is tough, but his product is compelling, and Jake tapped into the network to expand his reach.”

No question about that — Zinn is changing the face of how to tune in to music.