Men’s basketball coach Pat Kelsey was officially introduced to the College of Charleston community on Friday, March 26, 2021, at a press conference in the Cistern Yard.

With a crowd of around 100 students, faculty, staff, fans and student-athletes fanned out watching the announcement taking place atop the Cistern, President Andrew T. Hsu and Athletics Director Matt Roberts welcomed Kelsey to the Cougar family.

The location of the event in the Cistern Yard, in the heart of the historic campus, was symbolic. It is where incoming students gather for convocation and where graduating seniors celebrate the end of their journeys as students with commencement. It is also a place for campuswide events such as the College’s recent 250th anniversary celebration. 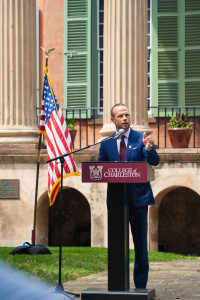 Pat Kelsey speaks during a press conference where he was introduced as CofC’s new men’s head basketball coach. (Photos by Mike Ledford)

“We reserve this spot for some of our most significant milestones,” Hsu said. “Today is another such milestone as we welcome our new head men’s basketball coach.”

What made Kelsey stand out, said Hsu, was his track record of success and his attention to detail. But what set him apart was his dedication not only to winning basketball games, but to ensuring the success of the players off the court, too.

“I can tell you he is a ball of energy,” Hsu said to the crowd, adding that Kelsey wowed the hiring committee, which included CofC men’s basketball alumnus Joe Chealey ’18, with his “dynamic spirit, his conviction as a teacher and his passion for the development of the whole person of the student-athlete. He goes beyond just cultivating their athletic talents and abilities – he also focuses on helping them develop in their academics and, more importantly, their character.”

Kelsey, who is the College’s 24th all-time men’s basketball head coach, was accompanied at the event by his wife Lisa and their three children: Ruthie, Caroline and Johnny.

He spent the last nine years as the men’s basketball head coach at Winthrop University in Rock Hill, South Carolina, where he averaged 20.7 wins per season. The 2021 Big South Conference Coach of the Year, Kelsey most recently guided the Eagles to a 23-2 campaign,  a school-record 21-game win streak and Big South tournament title, earning the league’s automatic NCAA Tournament bid for a third time under his watch.

Quick witted and self-deprecating, Kelsey spoke with humor and conviction about who he is and what he hopes to accomplish as the head of the College’s men’s basketball program. 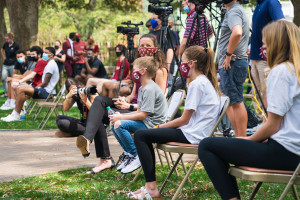 Pat Kelsey’s wife Lisa, and their children Johnny, Ruthie and Caroline at the press conference on Friday, March 26.

In terms of his personality, he described himself this way: “I got energy,” adding with a deadpan voice: “I’ve been described as making coffee nervous. It’s kind of who I am and how I operate.”

And his focus is going to be on winning championships. With a motto of “25 strong,” a nod to the collective value of a team, Kelsey said he plans to guide the Cougars to consistent victories at the top of the Colonial Athletic Association and beyond by focusing on people.

And the priorities Kelsey said he will focus on to lead the Cougar to success are “ABC: athletics, basketball, character.”

It is that balance of academics and athletics that convinced Roberts that Kelsey was the next coach of the College’s premiere athletic team.

“When looking for the next leader of our men’s basketball program, we wanted a proven winner, a program builder, a teacher, a mentor with family values and the vision to take us to the top of our conference with regular appearances in the NCAA Tournament,” said Roberts, noting that it was also essential the new coach have the skill set to provide the College’s student-athletes with the “best experience academically, athletically and socially.”

Roberts continued, “Pat Kelsey not only meets those expectations, he far exceeds them. Pat will embrace our history and build upon it. Today is a new beginning, a new era for our men’s basketball program.”