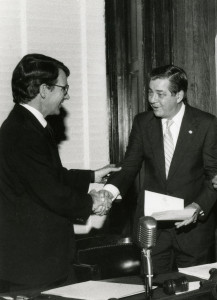 When he assumed the presidency, Collins continued to follow the student-centered philosophy of his predecessor, President Emeritus Ted Stern. Collins also dedicated several buildings that had been planned during Stern’s tenure, including the long-awaited fine arts building, Albert Simons Center for the Arts.

The most significant of Stern’s legacy that Collins carried on, however, was the continuation of campus-wide desegregation at the College. Collins’ plan included an increase in Black students, faculty and staff. He implemented programs including the Speedy Consolidation and Transition Program (SPECTRA), a summer residential program to help minority and first-generation students transition from high school to college that continues to this day. Formed in 1982, SPECTRA became part of the Student Union for Minority Affairs (SUMA), which had been formed in 1979 and today is run by the Office of Multicultural Student Programs and Services (MSPS).

With the support of CofC staffers Lucille Whipper and Margaretta Childs, in 1985 the Collins administration opened the Avery Research Center for African American History and Culture in the original Avery Normal Institute buildings. Today, the Avery Research Center collects and preserves archival materials, and raises awareness about African Americans in the Lowcountry and beyond through instruction and public programming.

Born in McComb, Mississippi, in 1931, Collins attended Millsaps College, where he played football and tennis and was elected to the Millsaps College Sports Hall of Fame for both sports. He went on to receive his Master of Divinity from Emory University, Master of Arts from the University of Iowa and his Doctor of Philosophy from Ohio University. 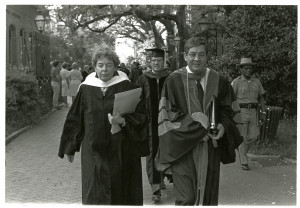 After leaving the College, Collins went on to work internationally as a higher education consultant in countries including Australia, England, Thailand, Russia and Germany. He also developed a national campaign to raise $200 million for the World War II Memorial in Washington, D.C.

“President Collins led the College of Charleston during a very important moment in this institution’s history and its evolution as a fairly new, state-supported university,” said President Andrew T. Hsu. “President Collins inspired the campus community with his vision of the university in his speech: ‘Finding Roots and Gaining Wings’ – which served as the theme for the bicentennial celebration of the College’s charter. Our campus community shares in his family’s sadness, but we also should take this moment to celebrate his many contributions as our 17th president and for his impact on generations of College of Charleston students and families.”

Throughout his life, Collins strived to make the world a better place, including at the College of Charleston. His intellect, curiosity, generosity and warmth will long be remembered.

Collins will be buried at Hollywood Cemetery in McComb, Mississippi. A private family funeral will take place at Hartman-Jones Funeral Home on April 17, 2021.

Tagged with: homepage-feed • office of the president