For the first time in history, the College of Charleston Cheerleading Team won first place at the National Cheerleaders Association (NCA) Collegiate National Championship. The team traveled to Daytona, Florida, April 8-10, 2021, for the competition and brought home the title of Intermediate Small Co-Ed Division I National Champions.

The team really had to hustle to make it happen, though. Due to positive COVID-19 test results for team members, they had to pause their preparations just a month out from the championship. Once they were out of quarantine, the Cougars only had two and a half weeks to prepare and finalize their routine.

“We practiced every single day for three hours or more — sometimes staying as late as midnight before calling it a night,” recalls head cheerleading coach Samantha Pairet ’18. “Between the team and I, we’re a group of perfectionists, and when it comes to cheerleading, attention to detail is the difference between first and second place.” 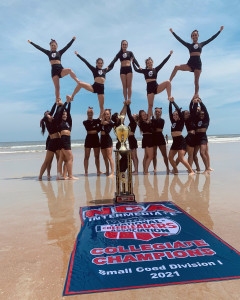 “All the work we’ve put in was worth it and it proves that dedication goes a long way. This season was the hardest season I’ve ever had in my cheer career, but we overcame every obstacle that was thrown at us,” says Kimbrell, who is majoring in political science. “It proves how bad we wanted the title and shows how much hard work and time we put into this routine. Go Cougs!”

During a normal season, the team has the opportunity to perform in front of an audience countless times between men’s and women’s basketball games, community appearances and showcases, but this year that wasn’t the case because of COVID-19 restrictions.

“I was most nervous to see how the team would perform under pressure since they had no experience with that in practices,” says Pairet.

The first opportunity to practice for an audience was the Monday night prior to leaving for the competition. The team hosted a virtual routine showcase.

“We had upwards of 150 friends, family, alumni, prospective cheerleaders and fans join the Zoom to watch the performance and wish the team luck,” says the coach. “That performance went better than anticipated, but we knew we had more work to do before leaving in two short days.”

Pairet recalls that the team was nervous before the preliminary performance at the competition, but when they found out they were in the lead after the first day, they knew a national title was a major possibility.

After the finals performance, Pairet says that “everyone left the competition floor with tears of joy, feeling so proud of what we accomplished. The team’s sheer grit, tenacity, and love for the sport and each other is what earned us this national championship title.”

And it was a truly fulfilling moment for the members of the team.

“It’s a comforting feeling to know that after all of the time, work, love and energy we put into that routine to earn the result we earned, I will, in the near future, cross the Cistern Yard as a member of a team that did what no cheerleading team at the College had ever done before,” says sophomore co-captain Wyatt Davis, who is majoring in accounting.

Freshman exercise science major Cassidy Pinson adds, “Winning nationals this year really proved to me that if we all work together, then we can overcome any challenges that are thrown our way. It was exciting because I haven’t been able to compete since 2019 (pre-COVID), so being able to come back with a win is an incredible feeling.”

Since March, Pairet has received more than 100 requests for tryout packets from incoming first-year students, transfer students and current CofC students. That number is sure to grow.

“Winning this title put College of Charleston Cheerleading on the map and we couldn’t be prouder,” she says.