Above: Freshman Zach Reuland was the individual champion at the 2021 CAA Men’s Golf Championship. 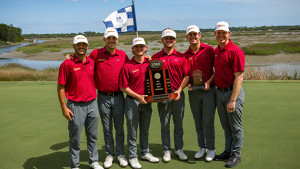 Under the direction of Head Coach Mitch Krywulycz, the Cougars earned the league’s automatic bid to the NCAA Division I Men’s Golf Championship shooting a 30-under par 834 – the lowest 54-hole team total in conference history. They won the conference title with a 23-stroke victory over runner-up Drexel.

It marked the program’s fifth CAA Championship title and postseason berth since joining the league in 2013.

Leading the way was freshman Zach Reuland, who was the individual champion, shooting 13-under for the tournament with rounds of 68, 68 and 67. He started off the day with an eagle on the par-4 1st and ended his championship run with a birdie putt on the 18th.

“I’m extremely proud of the entire program,” Krywulycz said. “This year was like no other and I’m grateful we were given the chance to compete. Our men played positively the entire event and it’s a testament that all of them shot in the 60s throughout the week. Now, we look forward to preparing for some exciting NCAA Regional play.”

For the full story visit cofcsports.com.