As the Class of 2021 prepares for commencement, May 6–8, The College Today will highlight how some of our graduating seniors spent their time at CofC, and what the future holds.

Dreams are often the whisper of our hearts reaching for the stars. But making a dream into a reality takes dedication, determination and drive. Just ask Tianyu Liu. 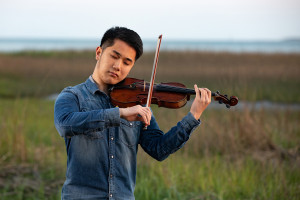 In the fall, Liu, who is graduating from the College next week with his bachelor’s degree in music with a focus on violin, will attend graduate school at The Juilliard School in New York City. Liu’s extraordinary talent and civic mindedness led to him receiving one of Juilliard’s coveted Kovner Fellowships. The merit-based award covers tuition, room, board and additional expenses. It also provides for enhanced programmatic opportunities such as participating in performances and master classes.

For Liu, getting into one of the world’s most renowned performing arts schools and then receiving the Kovner Fellowship serves as recognition of his artistry, talent and diligence as a violinist.

“I am so grateful for Juilliard’s faith in me,” he says. “Juilliard will cultivate me as a musician. It will also be encouraging to be around so many talented musicians.”

Attending Juilliard also fulfills a dream Liu shared back in May of 2019.

“I want to attend a music conservatory like Juilliard as there are still many ways I can improve,” Liu said at the time. “It will be a big challenge, but constantly challenging myself will help me to break through barriers.”

In the two years since, Liu has broken through numerous barriers. He competed as one of 16 finalists in the highly esteemed Michael Hill International Violin Competition. While he didn’t win, his participation gave him the platform to put his mental strength and skills as a violinist to the test.

It also prepared him for the numerous competitions around the world that he planned to participate in in 2020. Then he received a note from the College’s Center for International Education (CIE) in March of 2020 encouraging every international student to return home because of the COVID-19 pandemic.

Liu packed up his belongings and returned to his hometown of Wuhan, China. At home, he was only able to participate in the Music Teachers National Association (MTNA) Young Artist Performance Competition, which continued its competition virtually. Liu earned first prize in strings, becoming the first violinist from South Carolina to win the award — an accomplishment akin to winning the Superbowl.

“The most difficult thing was playing online for professors,” says Liu, whose last three semesters at the College were online. “The sound is not optimal on Zoom. In order to have a better sound, I started sending professor Lee-Chin Siow a video recording and then we would review the video together to discuss technique.”

Liu says the support he received from Siow over the years has been a guiding force.

“Having your teacher and mentor beside you is of tremendous help,” says Liu, who first started getting violin lessons from Sow, an associate professor of of violin at CofC, when he was 14. Each week, Liu and his father would take the four-hour train ride from Wuhan to Suzhou, where Siow was based at the time, for his lesson. 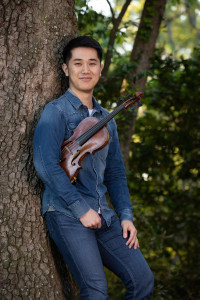 Siow knows what it takes to succeed as a violinist. Considered a national treasure in Singapore, she won the gold medal at the 1994 Henryk Szeryng International Violin Competition and has wowed audiences in more than 20 countries across five continents.

Her experience gave her the wherewithal to mentor Liu through a combination of encouragement and challenges. Siow not only asks for students to perform, she requires that they analyze their performances so that they can fully hone their skills.

Another challenge for Liu during the pandemic was not having the opportunity to play with classmates in orchestra and chamber music settings, something Liu looks forward to when he gets to Juilliard.

“The conductor would launch a Zoom meeting every Monday, and I would play along,” explains Liu. ”It was a great opportunity to for me to improve my technique, but I was really sorry to not be able to contribute to the music community.”

Now Liu, who received the Marion and Wayland H. Cato, Jr. Endowed Scholarship for the School of the Arts, the Lee Harwood Scholarship in Music and the Reba Kinne Huge Award in Music while at the College, will attend Juilliard without a financial burden.

Siow is full of pride for her protégé.

“I’m sad to see him go, but I am so happy for the recognition he has gotten at such a high level,” she says. “I was blessed to have a student of this caliber study with me. He has brought a lot of glory to the College.”

Tagged with: class of 2021 • commencement • Department of Music • homepage-feed • school of the arts