As the Class of 2021 prepares for Commencement, May 6–8, The College Today will highlight how some of our graduating seniors spent their time at CofC, and what the future holds.

Everyone traverses their own course, at their own pace. Sometimes the destination is clear from the start. And sometimes we find our purpose along the way.

That was the case for Jayne Pardys, who is graduating from the College of Charleston this week as a double-major in dance and anthropology. The Philadelphia native was drawn to CofC because of the College’s dance major, but she also liked that she could add a second major into her curriculum and take full advantage of the liberal arts experience.

After taking a few anthropology courses, Pardys began to think about how dance and anthropology – the study of human societies and cultures – interconnect. Then her path, once clouded and unclear, began to take shape in a new light.

“I’ve really focused on identity and cultural identity and shaping identity,” she says of her two majors. “A lot of my projects have been about dance and how dance reinforces identity and reinforces how we see ourselves through rituals.” 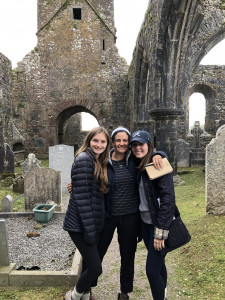 Pardys decided to pursue a concentration in cultural anthropology during her sophomore year after she took two study abroad Maymester courses in Ireland, including Peoples and Cultures of Ireland and Special Topics in Irish and Irish American Studies.

“I was trying to figure out where my interests fit within anthropology,” she recalls, noting that the experience influenced her final research project exploring the cultural traditions of Irish dance. “Going to Ireland and experiencing the culture and being able to talk to locals and living there, I think, really changed my perspective and sparked my ambition to study cultural and social anthropology.”

And being able to explore how culture and dance intertwine was a key component of her time at CofC, during which Pardys performed in seven main-stage dance productions. Most recently she participated in the Department of Theatre and Dance’s fall 2020 showcase “dance, deconstructed,” a series of performances crafted under the artistic direction of Gretchen McLaine, who oversees the College’s dance program.

Presented as a video performance without an audience, Pardys, who is a recipient of the 2020 Theatre and Dance Faculty Award and the 2021 Dean’s Excellence Award for Dance, says the experience of dancing with a mask and maintaining social distancing was a stark contrast to the typical interaction among dancers. But it was an opportunity she was grateful for, particularly within the context of the ongoing COVID-19 pandemic.

“Just being back on stage was the most amazing and thrilling moment for me,” says Pardys, noting that it was a privilege to perform under the direction of McLaine, who has been a mentor to her.

Over the last year Pardys has turned her attention to the intersection of sustainability and culture by pairing an internship with the College’s Center for Sustainable Development with a cultural sustainability certificate. In her internship, she helped organize virtual discussions with community leaders as part of the center’s Social Justice Coffee Hour, including an event with the Medical University of South Carolina titled “Environmental Justice & COVID-19.” 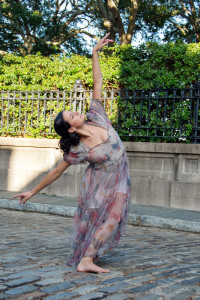 “Sustainability really is about thinking about the future and being a changemaker and taking an innovative approach to things and being a problem solver,” says Pardys, whose passion for sustainability has earned her the Emergent Changemaker Award from the Center for Sustainable Development and the 2020-2021 Distinguished Student in Sustainability Literacy Award. She notes that being a member of the Tri Delta sorority helped give her the confidence and leadership skills to tackle larger issues. “And now, I have the skills and the tools to really utilize these things in the outside world.”

But finding purpose through education wasn’t an easy process for Pardys, who was diagnosed with dyslexia as a child. She credits her success at the College to the support she got through the Center for Disability Services/SNAP (Students Needing Access Parity), noting that through learning accommodations, tutoring and guidance from faculty, she was able to enjoy learning for the first time in her life.

And she realized that she didn’t need to measure herself against others in order to feel a sense of accomplishment.

“I have come to understand that everyone learns differently and not to compare myself to other people,” says Pardys. “And I think that’s the most important thing – we’re all on a separate journey, we all are on different paths.”

Christine Finnan, chair of the Department of Sociology and Anthropology, has taught Pardys in three different courses and supported her throughout her time at CofC. Most recently, she took ANTH 115: Introduction to Cultural Sustainability with Finnan, who says Pardys’ passion for learning was evident in her support of her classmates.

“She really mentored many of the first-year students,” says Finnan. “She was able to make concepts relevant for them and she was always kind and helpful.”

“I’ve been so inspired by my professors at the College of Charleston,” she says. “And I’ve had such an amazing experience with them, especially being a SNAP student, and that’s inspired me to want to help other students.”

And that’s a course worth pursuing.