Class of 2021 Urged to ‘Work Together and Reach Great Heights’

More than 600 students graduated from the College of Charleston on Friday, May 7, 2021, celebrating the end of a triumphant journey after an uncertain year amid the COVID-19 pandemic.

During two ceremonies, graduates from the School of Humanities and Social Sciences; the Graduate School; School of Languages, Cultures, and World Affairs; and School of Sciences and Mathematics fanned out across the Cistern Yard, their traditional white dinner jackets and dresses dappled in the shaded sunlight of the moss draped oak trees.

“With your degree in hand, you show that you can do hard things,” CofC President Andrew T. Hsu told graduates from the School of Humanities and Social Sciences. “You didn’t give up – even when it would have been much easier to do so. Your resilience sets you apart from other generations of students.”

Because of limited capacity in the Cistern Yard due to COVID-19 protocols, no guests were allowed to attend commencement ceremonies in person. Instead, families and friends gathered at three satellite locations across campus where large screens were set up for viewing commencement exercises. 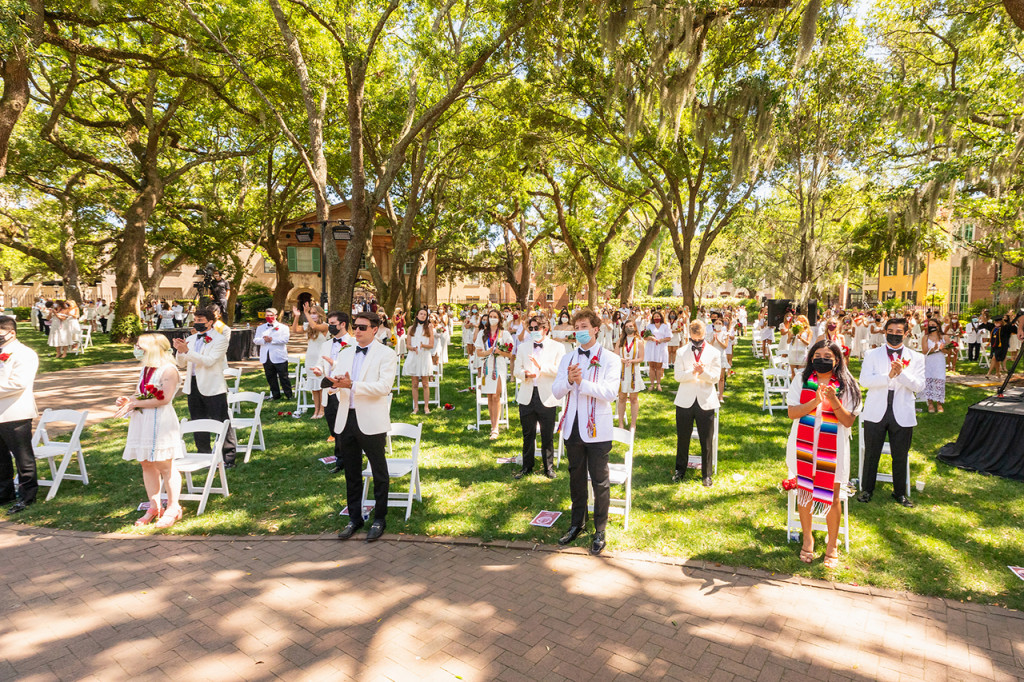 At the Stern Center Garden, families quietly chatted amongst themselves while waiting for the ceremonies to begin.

For Becky Kahn, the graduation of her son, political science major Connor Olson, was worth the 1,400-mile trip from Golden, Colorado.

“We’re so proud of our son,” said Kahn, noting that it was a moment she wouldn’t have missed. “He’s our youngest and he’s graduating.”

For the graduates, many said they chose the Cistern Yard ceremony in spite of the restrictions because they wanted to experience the tradition of graduating against the backdrop of the College’s iconic Randolph Hall.

For psychology major Hannah Adams, successfully making it to the end of her college career took on a greater significance.

“I think it is a bigger accomplishment being that we are graduating in a pandemic,” she said.

Even with all of the upheaval, Adams, who is from North Myrtle Beach, South Carolina, not only completed her degree, but has already been hired as a behavioral therapist to work with children on the Autism spectrum.

“I feel like [the pandemic] made it a lot harder, so I feel even more accomplished,” Adams said. 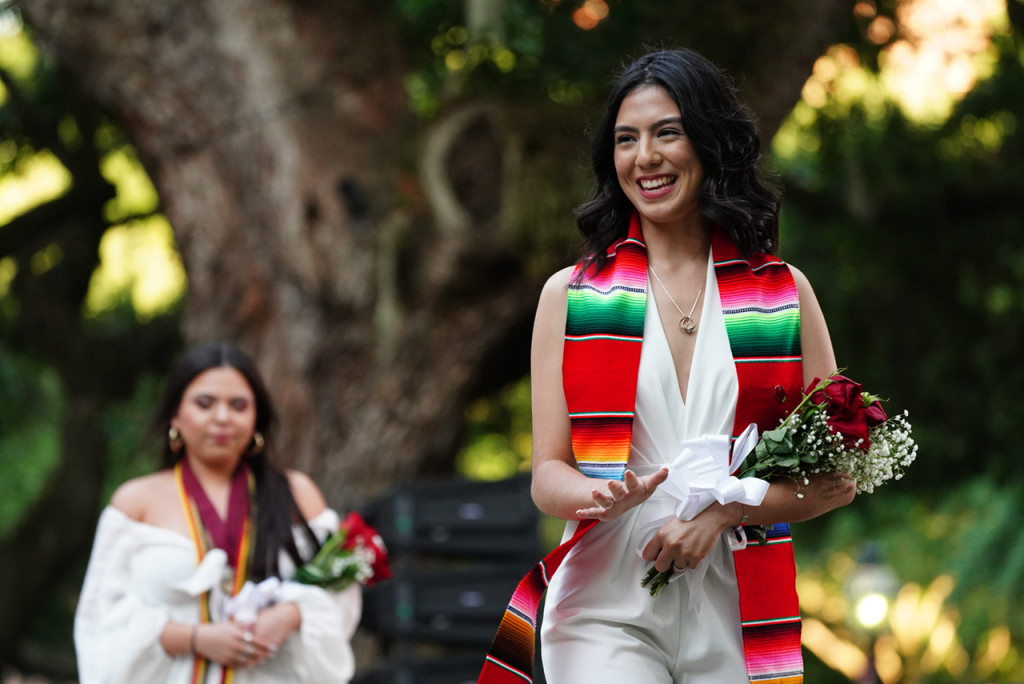 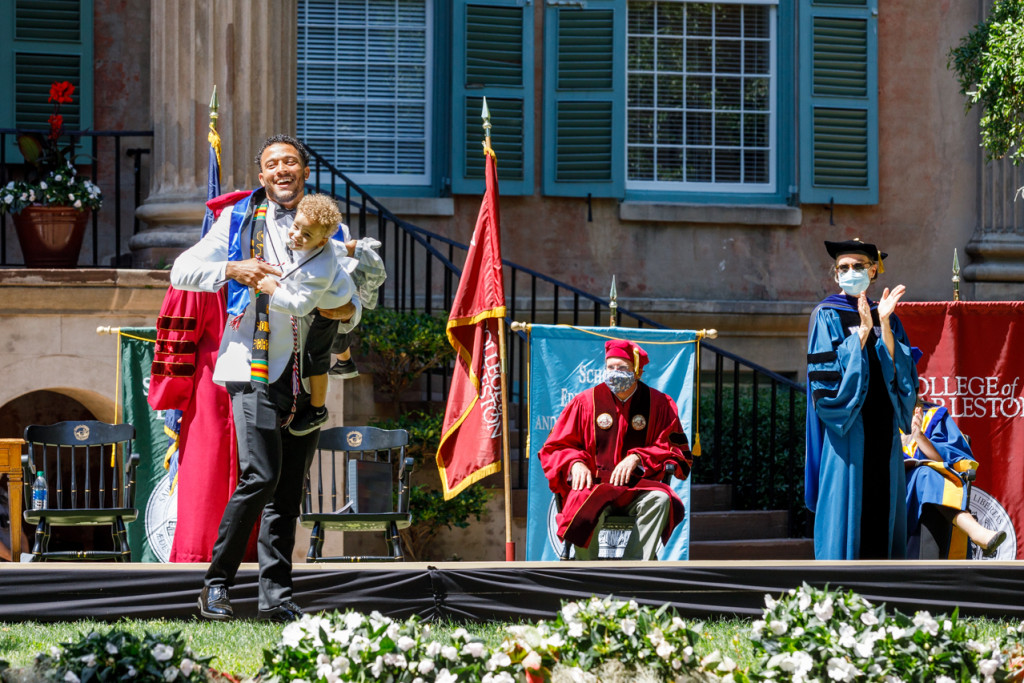 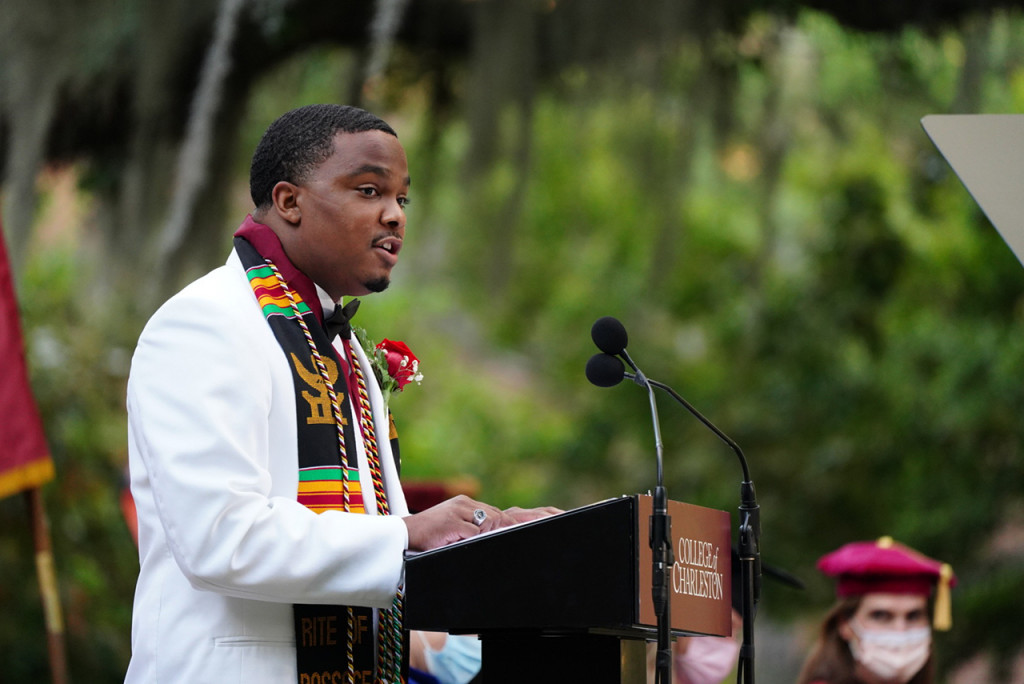 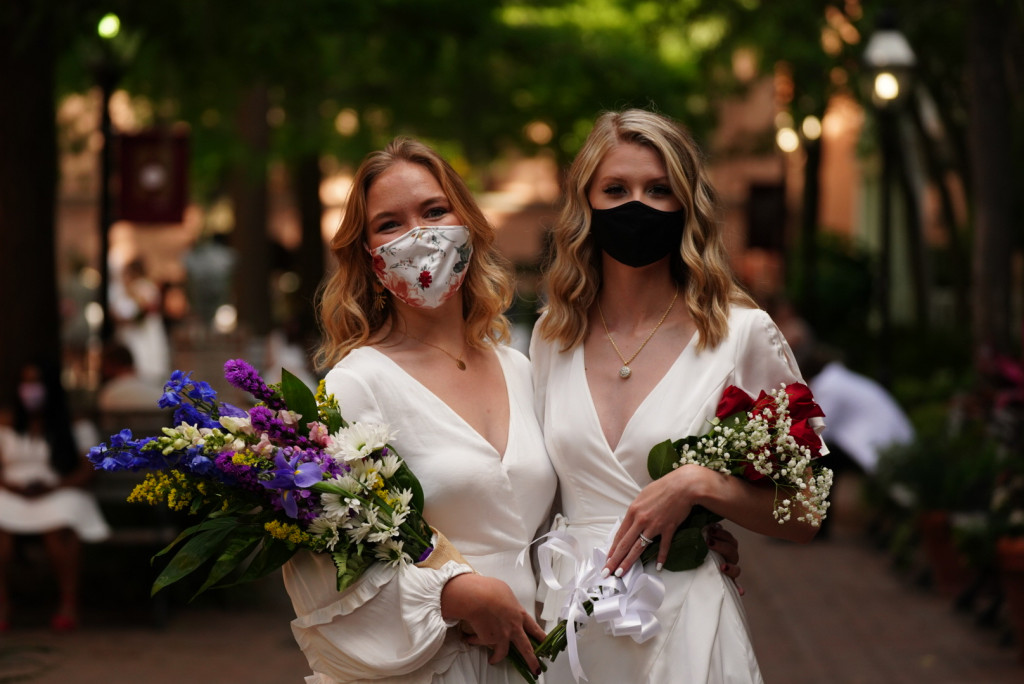 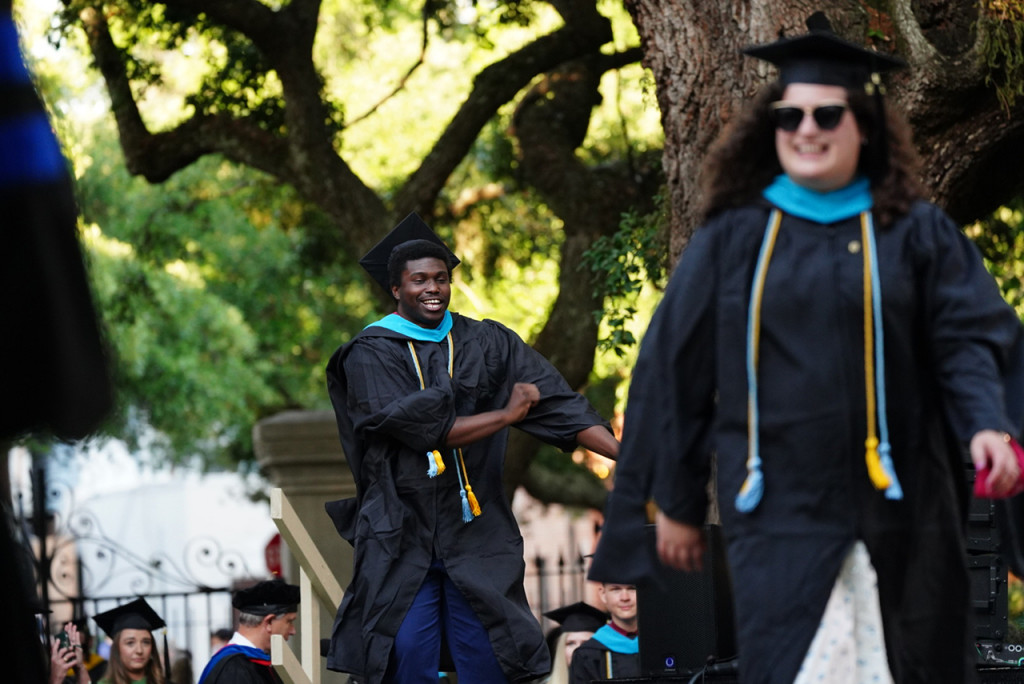 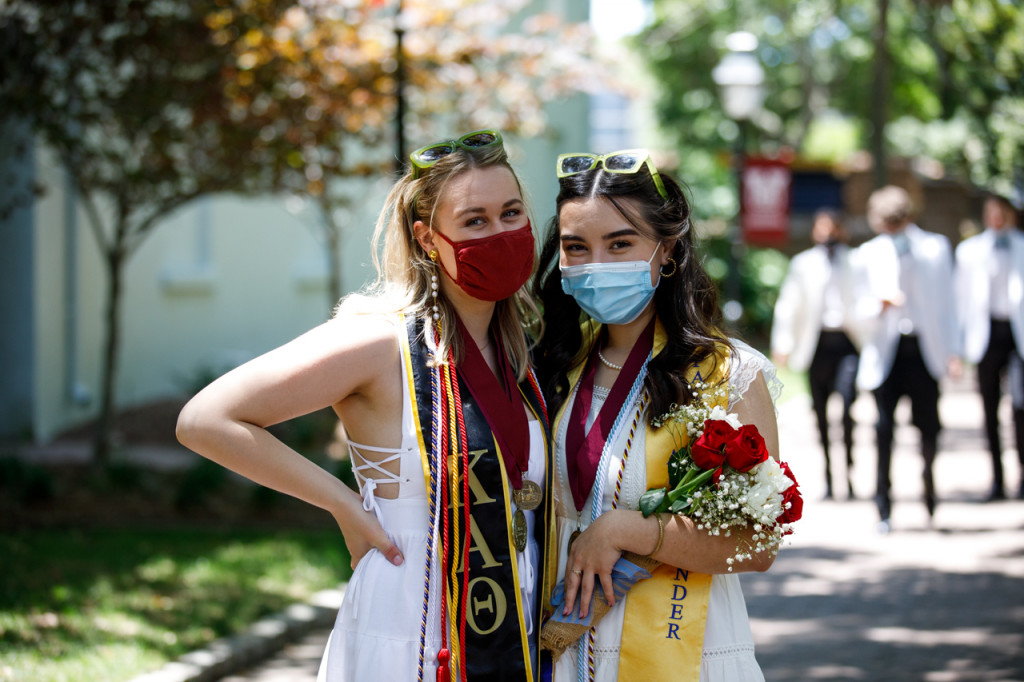 Computer information systems major Brett Hardiman described his final year of college as “taxing” and “hard.” But completing his degree was worth the effort.

“I’m the first person in my generation of my family to graduate from college, so it means a lot actually. It’s awesome,” he said, with a smile. “I’m really glad that I toughed it out and worked through it.”

Hardiman, who is from Omaha, Nebraska, plans to pursue a career as a data analyst or software engineer.

“I’m ready to move on to something else now,” he said. “I’m really excited.”

Commencement speakers Andrew Lewis,  professor emeritus of health and human performance, and Andrew Sobiesuo, associate provost emeritus for international education and professor emeritus of hispanic studies, each congratulated the graduates for their steadfast determination to complete their degrees and remain focused on their futures. 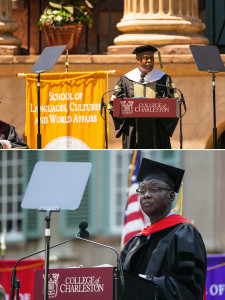 Above: Andrew Lewis Below: Andrew Sobiesuo (Photos by Mike Ledford and Heather Moran)

Lewis encouraged the graduates to value the importance of collaboration and to appreciate what can be achieved by many, rather than individual success.

“I challenge each of you to overcome mediocrity and avoid the ‘crabs in a barrow mentality,’ said Lewis. “By that I mean, do not develop the attitude that because someone else is achieving you must try to pull them down. Instead develop an attitude of cooperation and collegiality that will allow you to work together and reach great heights.”

Sobiesuo recalled his journey from childhood growing up in a small village in Ghana where there was no plumbing or electricity to attending college in Ghana and Spain before coming to the United States to pursue a career in higher education. All of the chapters of his life, he said, have had their challenges, but that he persevered much in the same way the Class of 2021 has also persevered.

“Remember that often times life without struggle is a life without success. But whatever your next adventure may be, whatever the hardship, I remind you to approach it with humility, to commit yourselves to the tasks at hand, take responsibility for your actions and never, ever forget where you came from,” he said. “After all, the values and attributes of hard work, honesty, perseverance, and service to each other are the building blocks of a fair and just society.

He added, “That is the lesson I learned from my father in that remote village. It worked well for me and it may work for you too!”

Tagged with: class of 2021 • commencement • homepage-feed