Fostering positive change in the world is a goal shared by many graduates of the College of Charleston. And a number of them are doing just that in small yet significant ways. Michelle Asha Cooper ’95, however, doesn’t want small changes. Her goals are beyond big. They’re beyond ambitious. If she has it her way, higher education in the U.S. will never be the same.

For almost two decades, Cooper has applied her formidable energy, talent and determination as a leading advocate for college affordability and accessibility. With her recent appointment to a top post in the U.S. Department of Education earlier this year, she’s now in a position to help make those changes a reality. 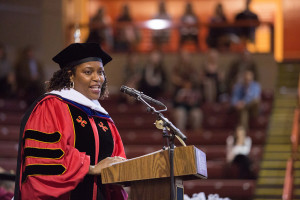 Michelle Asha Cooper served as a speaker for the College’s 2017 Winter Commencement ceremony.

Beneath Cooper’s signature, you’ll find the titles “U.S. Acting Assistant Secretary for Postsecondary Education” and “Deputy Assistant Secretary for Higher Education Programs.” Though her childhood growing up in downtown Charleston and her time as a student at Burke High School, a high poverty school, may seem far removed from these positions, it’s this background that makes Cooper, who majored in English at CofC, ideally suited for these roles. She understands firsthand the power of a college education.

“I’m a native Charlestonian,” she says. “I was educated in Charleston’s public schools, and I didn’t realize the importance of money and support until I attended the College and learned that there are different realities at play. I was able to finish and graduate, but some of my peers from Burke couldn’t because they didn’t have scholarship and grant support like I did. That’s when I began to realize the vital role that financial aid and affordability play, not just in people’s options, but in their life plans.”

That realization helped shape the core work of Cooper’s professional life. Before joining President Joe Biden’s administration in February 2021, she spent 13 years as president and chief executive officer of the Institute for Higher Education Policy, a Washington, D.C.-based nonprofit that seeks to increase college access and affordability. She has worked closely with the George W. Bush, Obama and Trump administrations, and is widely recognized as a trusted voice in higher education and a fierce advocate for students regardless of race, socioeconomic background or gender. Now, Cooper has effectively moved from policy advocate to policy maker.

“I have been very fortunate to be put into positions and places to meet people who listen to what I have to say,” says Cooper, who holds a master of professional studies from Cornell University and a doctorate in education policy and leadership from the University of Maryland, College Park. “So, I take this opportunity very seriously because I now have a seat at one of the highest tables. I feel like I represent those folks from Charleston – and elsewhere – who don’t have a seat at the table, and it’s all of those voices that I try to represent in my work.”

In her new role, Cooper bears an awesome responsibility. She and her staff in the Office of Postsecondary Education annually administer over $2 billion in federal grant monies. She’s also in charge of administering the higher education relief funds made available by the three recent stimulus bills, which totals $76 billion.

“My charge,” she says, “is to ensure that we achieve the goals outlined in those stimulus packages, which is to support higher education institutions and students to recover during the pandemic. So, recovery is a big part of my portfolio now, and we want to make sure that we recover with equity in mind.”

Cooper is well aware that she may only have four years to pursue her agenda at the Department of Education. Hence, she’s keenly focused on three priorities.

“First, I want to do everything in my control to lead a movement where colleges are recovering from the pandemic in a reform-minded way,” she says. “We want colleges to emerge from this stronger so that they can make students stronger. Colleges and universities need to make sure that they’re offering degrees that are valuable; valuable for the workplace and valuable to help students lead productive lives as citizens.”

Her second priority is equity.

“We want to make sure that the haves and have nots no longer exist,” says Cooper. “I believe that we can have a world where me having does not mean that you have less. I think there’s enough for everyone. So, that’s the framing I’m applying to this work. We want to make sure that our education systems and our structures are equity-centered and that our resources are going to institutions committed to this change.” 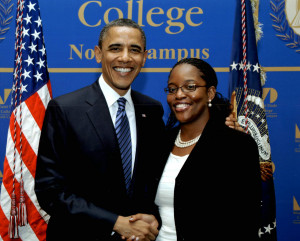 Michelle Asha Cooper has worked alongside several presidential administrations, including that of former President Barack Obama.

“This is a big thing for our administration and it’s something that I’ve been focused on for well over 15 years in my work,” she continues. “We’re putting a stake in the ground and saying ‘we want college to be affordable for all students, and here are the levers that we as the government can pull to do that, and here are the levers that institutional leaders can pull to do their part in making sure this happens for years to come.’ The rising cost of higher education is a train that we’ve got to get under control or we’ll be on a collision course soon.”

Given the enormous scale and scope of these goals, one wonders where Cooper draws her inspiration for committing to such monumental achievements. But the answer lies close to home.

“I grew up in a family of people who were civil rights activists and civil rights proponents,” she explains. “My parents came up in the 1960s. My father attended South Carolina State University, a historically Black college, and was a Vietnam veteran. He was always talking about social justice and racial equity. All of that influenced me, and coupled with all the opportunities I’ve had for education and travel, I’ve learned so much. When you learn more, you start to think differently about the world, and that brings you to the conclusion that we can be better. I know we can make higher education work for so many more people than it currently does.

“And, on a personal level,” she adds, “I’ve got a four-year-old daughter. I want the work that I’m doing now to mean that when she’s starting to think about college, it will actually be a better world. That’s a big piece for me. Yes, what I do brings professional fulfillment, but it’s also about the legacy that I’m creating for this little person.”

It’s clear that Cooper intends to mold her daughter in much the same way that people at the College helped to shape her.

“A lot of people at the College took an interest in me while I was there,” she recalls. “I feel indebted to them because they looked out for me. And they weren’t necessarily the people you customarily think of when someone says that. Certainly, I mean the faculty that I studied with. They definitely inspired me and took care of me. But so did the groundskeepers. So did the housekeepers. So did the cafeteria staff. There were just so many people who always had a good word to say and they poured their goodness into me. They’re just as important to my College of Charleston story – and my success – as everything I learned in the classroom.”