Above: CofC President Andrew T. Hsu with members of the Carpentry Shop and Campus Recreation Services, who partnered to build a mobile putt-putt course for campus.

At the end of the fall 2020 semester, that led to the launch of the Finals Fun Park, which featured a DIY mobile putt-putt course Lipata, assistant director of CRS, designed himself. After seeing how much students, faculty and staff enjoyed the putt-putt course, Lipata started thinking bigger.

“I was doing research online for different putt-putt setups we could purchase, and I thought, Carpentry can make this!” he recalls.

Excited by the thought of collaborating within the campus community on a customized putt-putt set, Lipata worked with Gene Sessoms, director of CRS, and Sam Holmes, Carpentry Shop supervisor, to get the project approved for the spring 2021 semester.

For Holmes, the idea was a win-win. It gave the carpentry shop team an opportunity to work on a creative project that they would then get to see others enjoy.

“I thought it was going to be fun,” says Holmes, noting that building putt-putt platforms is a nice change of pace for his crew, which usually tackles repairs for doors, walls, windows, ceilings and stairs. “I gave each of the guys a project and let them design each setup the way they wanted to design it.” 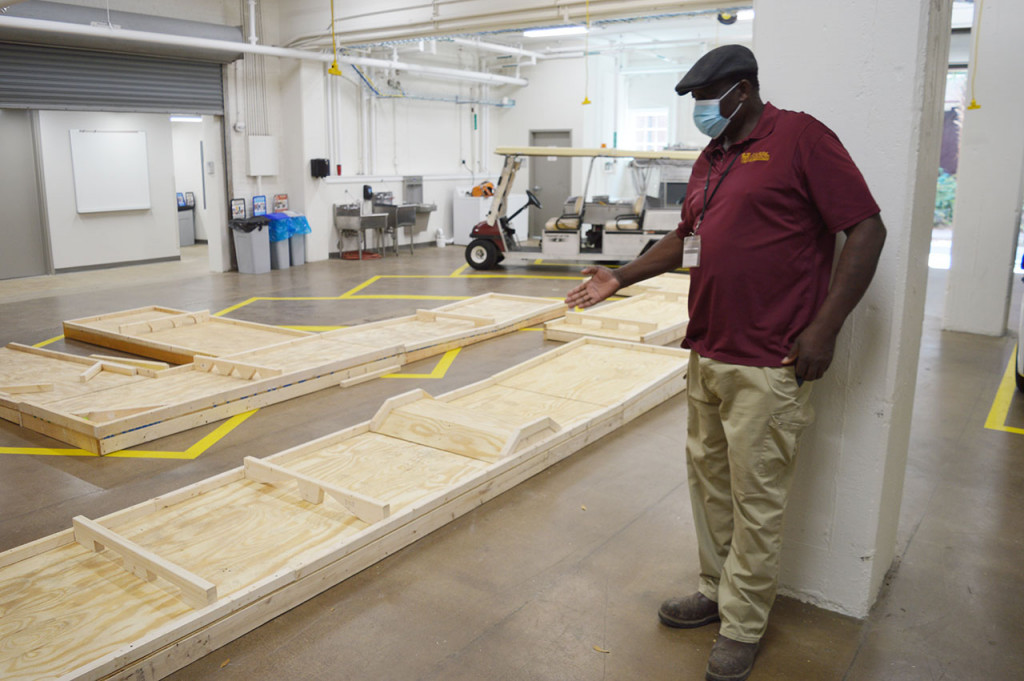 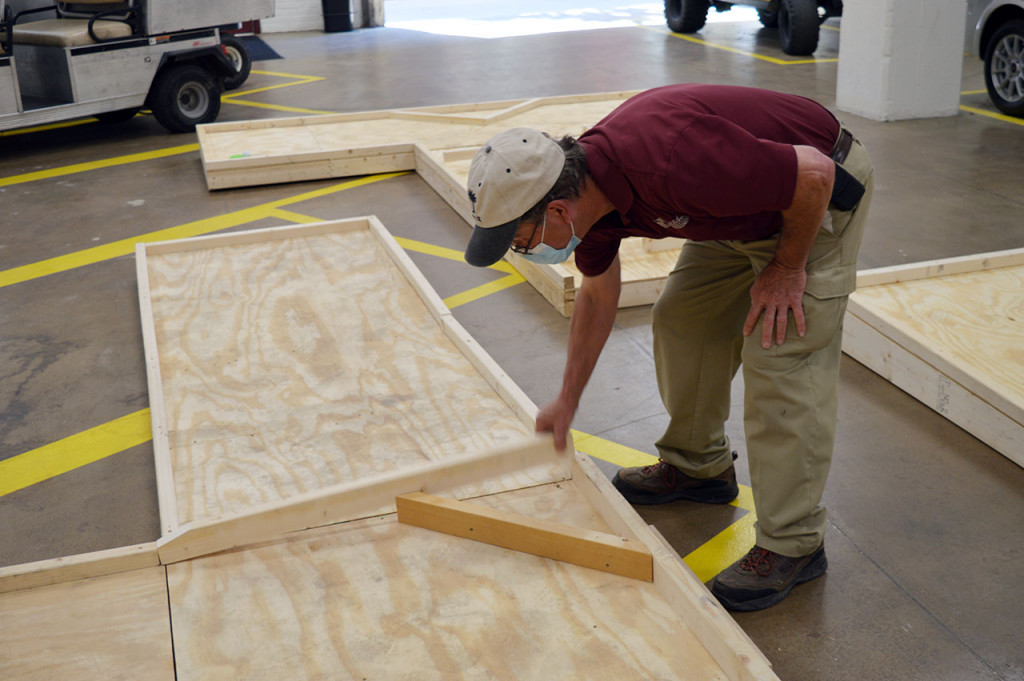 And building it was only half of the fun.

“The best part was testing it out,” Holmes says with a grin. “We were the first ones to play on it!”

The result of their efforts feature eight movable pieces that can be set up in a variety of configurations both indoors and outdoors. And with movable holes, there’s no shortage of ways to make the platforms different for every occasion.

“The structures themselves have inclines and downward slopes,” says Lipata, who also created a few obstacles such as a battery-powered windmill. “Carpentry created arches for balls to go under. They built corner pieces to have balls bounce off the corners and one platform even has an overpass ramp.”

RELATED: Find out how CofC faculty and staff can play mini-golf and other activities this summer.

The putt-putt course made its official debut in April 2021 in the Cistern Yard. Billed as “Putt-Putt Under the Oaks,” the mini-golf course was part of the Cougar Countdown lineup of activities, which supports students during finals.

“It was unreal,” says Lipata of seeing the putt-putt pieces displayed across the Cistern Yard. “Putt-putt is the last thing that comes to mind when you think of the Cistern Yard, but it actually worked out.” 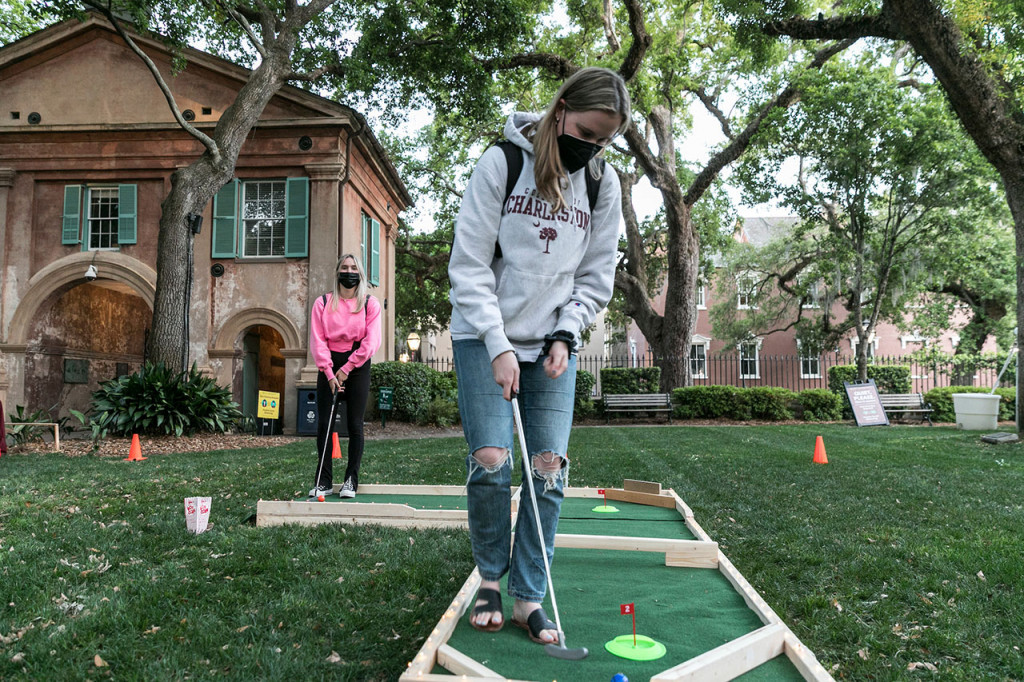 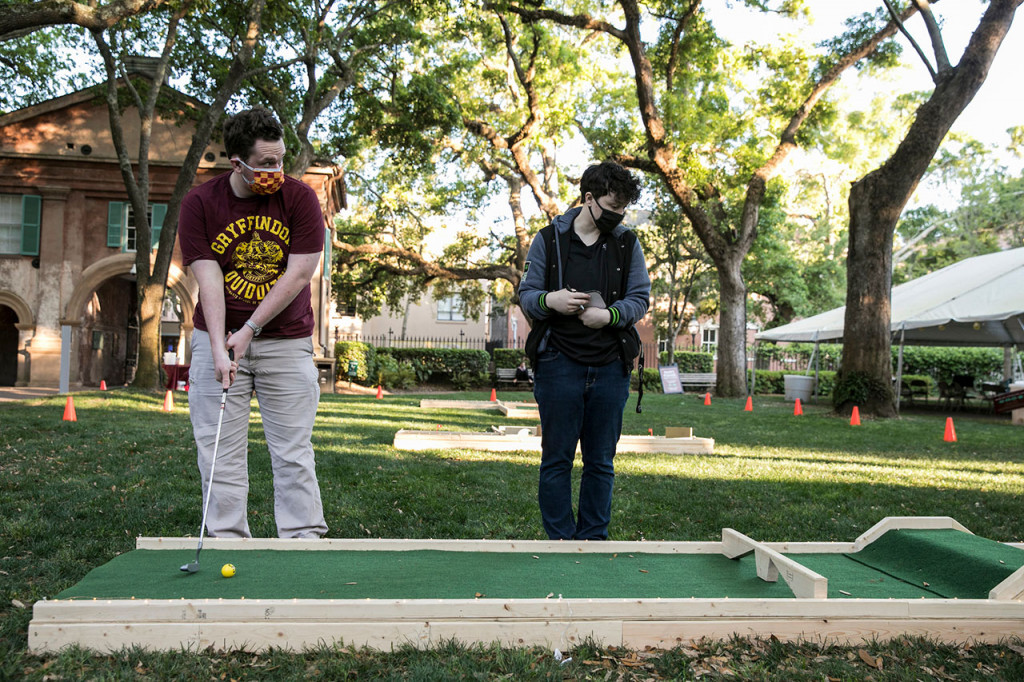 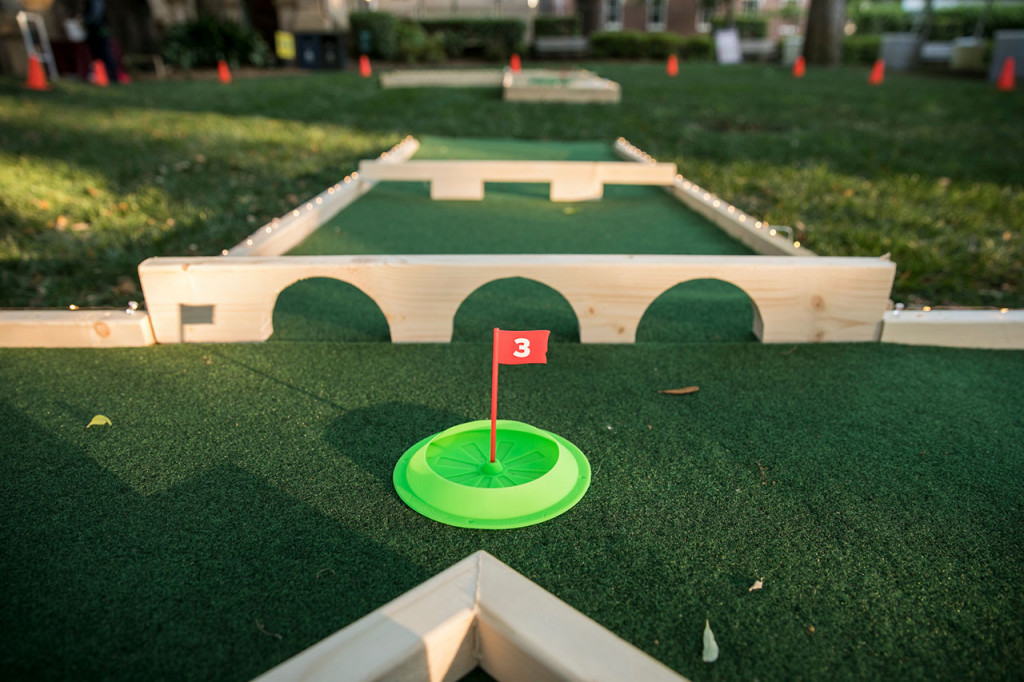 Lipata has since made the putt-putt set part of his regular CRS offerings and plans to feature the putt-putt platforms for special College events like Weeks of Welcome, Cougar Countdown and orientation.

Seeing the project come to fruition was rewarding for Holmes and his team, who are interested in partnering with CRS to expand the putt-putt course.

“It just gives me energy to want to build more,” says Holmes on seeing the putt putt set-ups in action. “I love it.  Normally, we just get work orders to come fix things. This is special. We’re enthused about it.”