By Darcie Goodwin|2021-06-14T10:54:04-04:00May 27, 2021|Academics, All News|Comments Off on Hines Prize Puts Carolina Lowcountry and Atlantic World Program on the Map
Above: Sam Hines (second from left) presents a gift to Simon Lewis, Sandra Slater and Timothy Johnson in support of the biennial Hines Prize. (Photo by Heather Moran) When then-President Lee Higdon asked Dean Emeritus Sam Hines, the first dean of the School of Humanities and Social Sciences, to create something unique and different for the College of Charleston, his first thought was something to elevate the Carolina Lowcountry and Atlantic World (CLAW) program. The second idea that bubbled to the forefront was a school dedicated to classical and modern languages with international studies and study abroad opportunities. While the School of Languages, Cultures, and World Affairs (LCWA) took longer to manifest, CLAW was already in full swing. It had embarked on a mission in 1994 to promote scholarship and public awareness of the Lowcountry’s role in historical and ongoing relationships among various Atlantic World cultures, societies and ethnicities in Africa, Europe, the Caribbean and the Americas. Hines wanted to help bring more attention to the CLAW program by supporting new publications that focus on the Carolina Lowcountry or the Atlantic World. That concept led to the launch of the Hines Prize in 2003. Every two years, the Hines Prize is awarded to the best first book manuscript relating to any aspect of the Carolina Lowcountry and/or the Atlantic world. Winners receive a $1,000 cash award and preferential consideration by the University of South Carolina Press for the CLAW Program’s book series. Since the first prize was awarded more than 15 years ago, graduate students, tour guides and researchers from all over the world have shared their manuscripts. “Since its inception, CLAW has played an important role in promoting an understanding of the influence and interconnectedness of the Atlantic world,” says Suzanne Austin, executive vice president for the Division of Academic Affairs and provost, “and the Hines Prize recognizes the important contributions of the scholars whose work advances this interdisciplinary field.” Under the direction of Hines and Simon Lewis, speaker of the faculty senate and professor of English, CLAW has developed a rigorous outreach program including lectures, conferences and newsletters. The program has also established itself as a repository for scholarly research, including undergraduate research opportunities for CofC students along with direct access to Atlantic World experts. For Lewis, who joined the College in 1996, CLAW was one of the most interesting things happening on campus. “It was and continues to be a fascinating intellectual hub,” he says. “It also coincides with my literary research on the connection between West Africa, the Caribbean and the southeastern United States.” Over the years, Lewis has taken full advantage of the CLAW offerings including a lecture on the importance of rice to the U.S. colonies, a seminar on the history of Porgy and Bess and a presentation that linked the Charleston Jenkins Orphanage Band to the Fisk Jubilee Singers. His passion for CLAW led to him assuming the role of associate director and then director of the program. (When Lewis was elected Speaker of the Faculty, Sandra Slater, associate professor of history took the helm.) 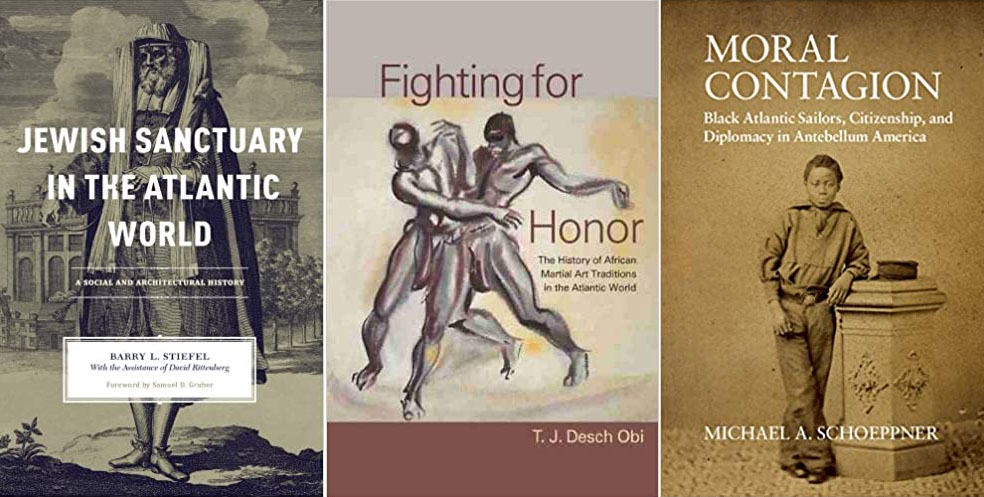 Books exploring everything from Jewish migration to African martial arts to Black maritime workers have been published with support from the Hines Prize.

But the Hines Prize, in particular, has put CLAW on the academic map. Hines developed the publication prize in honor of his mother, Rachel Carroll Hines, who received her master of history from UNC Chapel Hill in the late 1930s. His mother instilled in him a love of history and culture. “My mother wrote her graduate thesis on Benjamin Franklin as ambassador to France — a good Atlantic World story,” recalls Hines, who would take his mother’s WWII 40” x 24” scrapbooks to elementary and high school for show and tell. “I always cherished the love of history she gave me, so I wanted to honor her legacy.” When LCWA opened its doors in 2006, Hines became its first dean, and CLAW, with its unique configuration and programs, came with him. “It made sense because of the interconnectedness and the movement of people,” explains Hines, who continues to champion CLAW and the Hines Prize through philanthropic support. “It’s completely in line with the school’s globally connected focus.” This year marks the tenth occasion the biennial Hines Prize has been awarded. Six manuscripts have been received from academic institutions including Loyola University in Maryland, Claremont University in California and Newcastle University in England. The CLAW advisory board will review the submissions and will announce the winner in July. “Every year, we get amazing submissions,” says Lewis. “Some years, in addition to the Hines Prize winner, other book submissions are published. It’s a testament to the scholarship of the applicants. Sam’s vision has really been vindicated.” Past Hines Prize winners: 2019 – D. Andrew Johnson for Enslaved Native Americans and the Making of South Carolina, 1659-1739 2017 – Michael Schoeppner for Regulating Moral Contagion: Black Atlantic Sailors, Citizenship, and Diplomacy in Antebellum America 2015 – Huw David for The Atlantic at Work: Britain and South Carolina’s Trading Networks, c. 1730 to 1790 2013 – Tristan Stubbs for The Plantation Overseers of Eighteenth-Century Virginia, South Carolina, and Georgia 2011 – Michael D. Thompson for In Working on the Dock of the Bay: Labor and Live along Charleston’s Waterfront, 1783-1861 2009 – Barry Stiefel for Jewish Sanctuary in the Atlantic World: A Social and Architectural History 2007 – T.J. Desch-Obi for Fighting for Honor: The History of African Martial Art Traditions in the Atlantic World 2005 – Nicholas Michael Butler for Votaries of Apollo: The St. Cecilia Society and the Patronage of Concert Music in Charleston, South Carolina, 1766-1820 2003 – Bradford Wood for This Remote Part of the World: Regional Formation in Lower Cape Fear, North Carolina, 1725-1775