As an astronomer whose research focuses on the imaging of extrasolar planets many light years away, Joe Carson spends a lot of time looking at distant celestial bodies. But his research and the imaging tools he and his team have created are grounded much closer to home. In fact, Carson credits the talent and skill produced right here at the College of Charleston for the development of medical imaging instrumentation that is now being used to look at human bodies on Earth.

“Over the past five years, everything that Pensievision has done has been enabled by students and alumni, who are the engine of the technology’s development. Because of their work, we have been able to create this innovative and important device for doctors to use in any medical setting where imaging is used,” says the associate professor of astronomy. “My current project’s long-term goal is to prevent cervical cancer deaths in some of the most underserved communities in the world, including those lacking medical infrastructure or even electricity.” 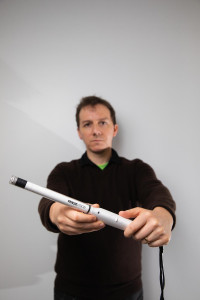 And, this spring, Carson was awarded a $400,000 National Institutes of Health (NIH) grant to make this a reality. Through the NIH Small Business Innovation Research (SBIR) program, Cancer Prevention, Diagnosis, and Treatment Technologies for Low-Resource Settings, the grant supports a 20-patient study of the 3D-imaging camera that Carson and his team created. The funding will allow Carson to travel to Kenya to meet with women’s health leaders there and prepare for an intended follow-up patient study in sub-Saharan Africa.

“This grant will have far-reaching impacts – and it’s all possible because of the CofC students and recent grads and all their hard work that has led up to this,” says Carson. “They’ve been creating new codes, designing and assembling devices, and applying software in novel ways.”

The students and alumni even played a central role in creating the NIH grant application. And – considering that the NIH review committee gave the proposal a perfect score – they did a pretty great job!

“A perfect score is unheard of – I’ve never seen one, I’ve never heard of one,” says Carson, explaining that usually a score of 40 indicates you’ve done really well, with 10 being perfect and 90 being poorest. “When I saw the score of 10, I actually contacted the program administrator to see if there was an error. It just shows how innovative this technology is. It’s a big jump from what we have now – a huge paradigm shift. So, this shows that they see something really special and really valuable in this work.”

As immense an impact that this technology might have across the world, Carson says it’s the impact that the work is having on the students and alumni that he’s especially proud of.

“It gives them experience with leadership and optical design – lab testing, engineering, circuit boards – and with FDA considerations, and that approval process,” he says. “They’re not just learning the technology and the engineering, they get to learn about deploying these products. They’re thinking about the consumer side of it: usability, scalability, aesthetics.

“They also get to see the economics of it,” Carson continues. “They get to see how getting investor support is different than government support. They get to see how things all come together – all the different angles, from design to diagnosis – to make a difference in medical research from here to third world countries. These things are the future of medicine, so it puts them in an extremely strong position for imaging processing, artificial intelligence, data analyses and so on.”

Junior astrophysics major Jenna Snead agrees that the independent research project she has done with Carson and Pensievision has all sorts of applications – including in the astrophysics research that she plans to do after college.

“While doing a medical imaging project seems way out in left field, astrophysics relies on a lot of the same imaging techniques, which will help me in any future astronomical imaging projects,” says Snead, who last semester won the School of Science and Mathematics Best of the Best Award, the Sigma Xi Best of the Best Award and the Department of Physics and Astronomy Best Poster Award for her research with Carson. “Dr. Carson also often takes time to go into detail about how the concepts I’m working with relate to my particular field, and to physics in general. Additionally, working with software and computer programming is indispensable to both grad school and any area of physics research, so getting familiar working with this project’s code has been an amazing experience.”

This summer Snead is working with circuits in an attempt to improve battery functionality and length of battery life, but her particular study of interest involves color analysis and how to best organize color channels to get the best image possible from the imaging wand.

“This work is largely done on the software side. While this seems like a small project, it is important that we can get a clear image so that the future clinicians using it can diagnose as accurately as possible,” she says. “The coolest thing I’ve learned in my research so far is definitely how we actually process light and create images. Everything we perceive requires a different focal length – which, when done manually (as we are doing with our 3D imaging), requires long lines of code. However, our brain does it automatically, every second of the day. It’s just crazy when we think about how capable our brains are of processing the world around us.”

It’s these kinds of connections that make Carson so excited about what the College can inspire in its students – and how valuable that is to the future workforce.

“The College produces smart, creative, hardworking innovators. It provides a really good educational background – and its graduates are bringing that education out into the world,” he says. “The students and graduates of the College really are the lifeline of Pensievision – our number one resource.”

In addition to producing a smart and skilled staff for Pensievision, the College has supported Pensievision through partnerships and grant applications, too.

“Pensievision did not sprout up by itself – it took a lot of support. And I cannot emphasize enough CofC’s role in partnering to save lives and to create high paying jobs in the Lowcountry. Forming those partnerships has been invaluable,” says Carson, adding that in recent years Pensievision has been among the top employers of students graduating from the College’s Department of Physics and Astronomy. “And as CofC’s engineering program gets up and running in the next few years, I think that this partnership will continue to expand.”