These Cougars Are Birds of a Feather 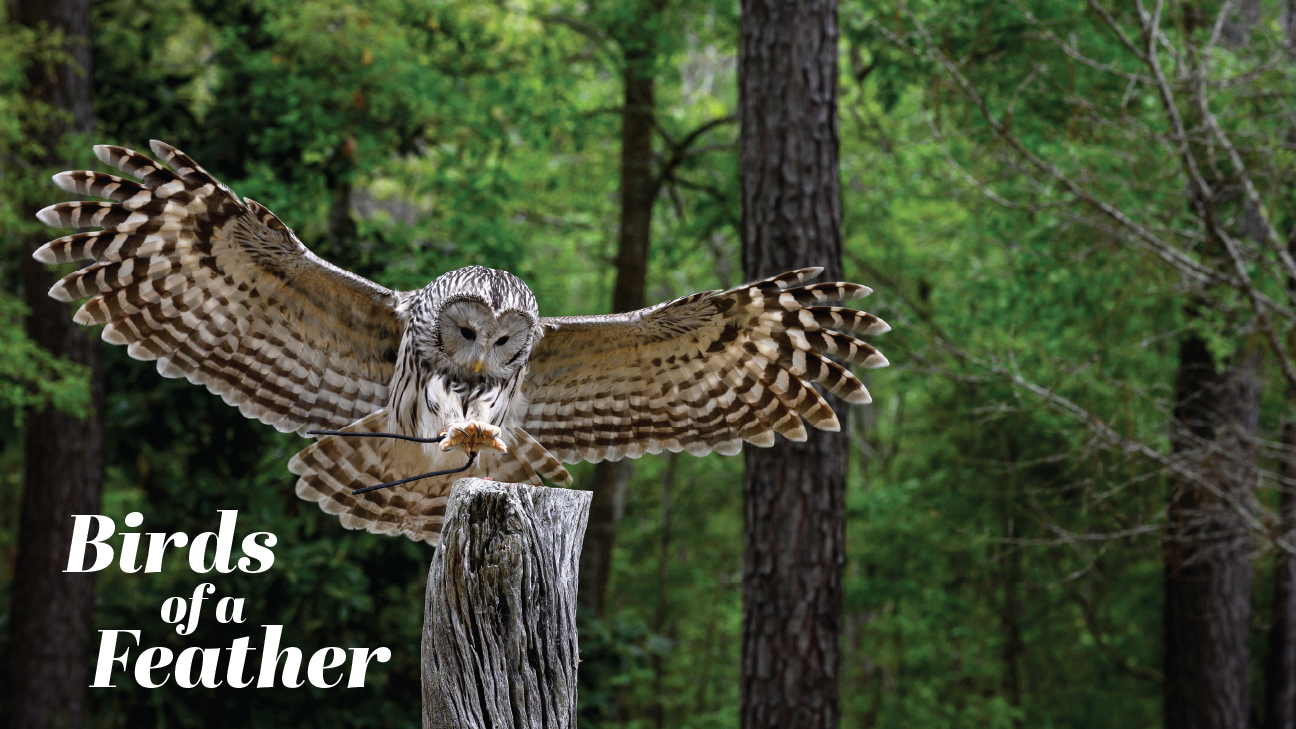 With dozens of students, faculty and alumni on its employee and volunteer roster over its 30 years, the Avian Conservation Center in Awendaw, South Carolina, is as much a Cougar refuge as it is a sanctuary for birds of prey.

One of the big attractions of the College is its location, not just its moss-draped campus in historic downtown Charleston, but also its setting in the nature-rich Lowcountry of the South Carolina coast. The marshes that crisscross the region brim with wildlife, but loss of habitat due to pollution and population growth have put a severe strain on all species, birds in particular. While the bald eagle has made a tremendous comeback from near extinction, many others are in trouble. The bird population has declined by 3 billion, or 29 percent, since 1970, according to a 2019 report.

Fortunately, Charleston is also home to one of the best raptor protection and rehabilitation facilities in the Southeast, the Avian Conservation Center: Birds of Prey Sanctuary. Located just north of Mount Pleasant in Awendaw, the center is celebrating its 30th anniversary this year. Founded by Charleston commercial real estate businessman Jim Elliott, who is still the executive director today, the center is situated on 152 acres of land donated by legal eagle Joe Rice, the Charleston attorney who is famous for winning a $246 billion judgment against the tobacco companies in 2006. In addition to weekly flight demonstrations and 90 different display enclosures featuring 50 different raptor species to educate thousands of visitors every year, the sanctuary annually helps about 1,000 injured raptors recover, does bird husbandry and conducts research.

And much of it has been done by the dozens of CofC alumni, students and retired faculty who have worked at the center over the years. Here we highlight the current employees and volunteers making a difference.

Stephen Schabel ’97 (M.S. ’03), director of education, has been with the center since 2003. His primary role is conducting twice-weekly flight demonstrations to the center’s 14,000 visitors every year (the outreach program reaches another 25,000 students in the Lowcountry), as well as training the birds that participate in the demonstrations. 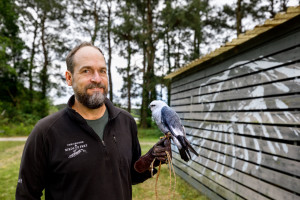 Stephen Schabel ’97 with a Mississippi kite (Photos by Heather Moran)

“I use a lot of the aspects of my education at the College in the work that I do,” says Schabel, who majored in education as an undergraduate and studied environmental studies as a graduate student. “I’m not out there necessarily gathering scientific data, but I’m sharing that data, educating people on how birds get injured and the existential threat they face. They’re really sensitive to changes in the environment, so they’re great indicators of what’s happening out there.”

The educational programs include birds that have come from other centers around the country or that have been found injured nearby and can’t return to the wild. Half of them are native to the U.S., while the other half are birds from around the world, some of which are bred at the center. “The idea is that we work with other facilities that are also breeding birds to maintain a diverse gene pool in captivity,” says Schabel. “It’s also important to learn how to produce these birds in captivity before there’s a crisis so that you’re not trying to figure out how to do it when the need is right there in front of you.”

While the flight demonstrations are very entertaining, the ultimate goal is to educate visitors on how to help raptor populations. “Thirty years ago, a bald eagle would have been a rare sight, and now they’re pretty common,” he says. “That’s a testament to the fact that these conservation efforts can work and we can win some of these battles.” 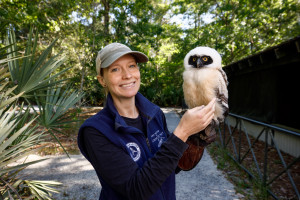 Audrey Poplin Ray ’09, husbandry coordinator, has been at the center since 2008, starting as a volunteer after one of her biology classes made a field trip there. She’s been a full-time employee since 2012.

“The center is a great organization to be a part of,” she says. “It has such a wonderful mission, something you can really get behind. I love being outside and working closely with the birds. I knew growing up that I wanted to work with animals.”

As a biology major at the College, she thought about becoming a veterinarian but realized she enjoyed caring for animals more. At work, she enjoys making sure the birds have the things they need to be happy in their enclosures, whether that’s a nest box or ledge, or sticks to create nests themselves.

But Ray spends the bulk of her time hand-raising birds that are going to be used for flight demonstrations and managing the captive breeding program, which can be a challenge.

“Just because you put a male and a female in an enclosure together doesn’t necessarily mean you’re going to get chicks,” she says. “It can be a long process to get them comfortable and get the things that they need in there.”

Jessie Curry ’17 with a turkey vulture

Jessie Curry ’17, educator, has been with the center since she graduated. As a biology major, she originally thought she wanted to work with large mammals like wolves or bears, but then one of her “favorite professors,” Arch McCallum, suggested she volunteer at the center. (An ornithologist, the former CofC adjunct biology faculty member himself was once a volunteer in the center’s medical clinic.)

“It opened my eyes to this entire world that I’d never even considered,” she says. “And it just blew me away.”

CofC really made her appreciate and understand the natural world and the complex relationship between animals, though she and her classmates used to
joke about how McCallum always used birds for his conservation biology class.

“Everyone would ask him to spice it up with some different animals,” she laughs. “But now it all makes sense. I understand why he said they’re the perfect example for everything because there’s so much diversity and complexity in the bird world.”

Her duties include assisting with taking care of the entire collection of 100-plus birds, as well as training the ones she uses in the flight demonstrations and outreach programs.

“I love being able to work with these incredible animals, but I also love seeing the joy on the faces of the guests,” she says. “It’s a great feeling.” 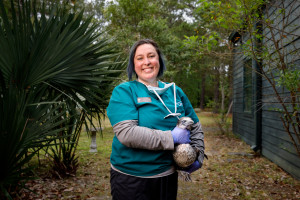 Kimberly King ’09 with a northern gannet

Kimberly King ’09, medical clinic volunteer, has been at the center since 2007. Ever since she passed the written and practical tests on things like tying a falconer’s knot and using a telemetry unit to locate a bird – something the center requires before volunteers are allowed to handle the birds – she has been admitting and treating injured birds with the goal of releasing them back out into the wild.

“Seeing them recover and released is absolutely my favorite,” she says, noting they often involve the person who brought in the injured bird in the release. “It makes all the other harder things that go on worth it.”

King has had a love of birds since she was young. And she’s had a few of her own over the years – including her current pet, a 16-year-old quaker parrot named Keiko. She also has a passion for volunteering, something her parents instilled in her. So, her two interests dovetail nicely at the center, where she can be found most Saturdays.

During the week, King works as a products and special projects coordinator at a custom analytical standards manufacturer. A biology and flute-performance major, she plays the flute and piccolo in the Mount Pleasant Symphony.

Her favorite bird at the center is either the great horned owl or the screech owl. “I love their big ol’ eyes,” she says. “They’re just cute – cute killers.” 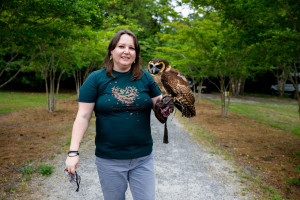 Ashley-Ann Woods ’07, education volunteer, has been at the center for three years, doing a little bit of everything, from working as a docent to logging the exact amount of food the demonstration birds consume.

“It’s important that they maintain a flying weight,” she says. “Sometimes the birds get in a mood. They’re like, ‘I’m done with chicks,’ so you give them a mouse. They have their own little personalities.”

An English instructor at Trident Technical College by day, Woods is getting ready to start a Ph.D. program and plans to do her dissertation on owls and their portrayal in literature and pop culture. “Working at the center is kind of a dream come true,” she says. “I never thought I’d get to do something like this.”

As much as she loves owls, her favorite birds just might be black vultures, who, despite their reputation, are actually cleaner than other birds and have a playful sense of humor.

“You have to be really careful when you’re cleaning their enclosure because they’ll play keep-away with your sponge,” she says. “They also have very strong family bonds and social structure. The head of the unit always roosts on top. You can tell who’s lower on the totem pole even when they’re not in the tree because they’re usually the ones with poop on them.”

For Woods, being at the center is uplifting. “I always joke that it’s my Disney World,” she says. “It’s my happiest place on Earth. It centers me. I’m just really thankful I get to be a part of it.” 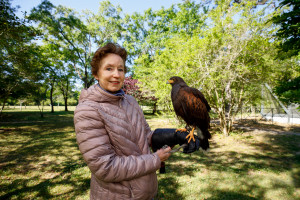 Martha Dougherty with a Harris’s hawk

Martha Dougherty (former French adjunct faculty), education and husbandry volunteer, has been at the center for two years. It’s a good thing she isn’t squeamish, since one of her duties is prepping the birds’ food, which involves cutting rats in half and removing their intestines and tails.

But that’s the only downside to the job that otherwise gives her so much joy.

“I just love the whole complex in the woods,” she says. “It’s beautiful. I live downtown, so I like being out in the country. I also love going in the enclosures and being three feet away from bald eagles, falcons, red-tailed hawks – you name it.”

In fact, she’s gotten a little too close to some – like the breeding owls, who have clocked her pretty good in the head a few times as she’s going to clean their water bowls or perform other housekeeping duties.
Although she loved teaching at the College for 25 years, working at the center has made her rethink her career choice.

“If I had another career, I think I would do something in biology or become a master naturalist,” she says. “It’s just so much fun and interesting.” 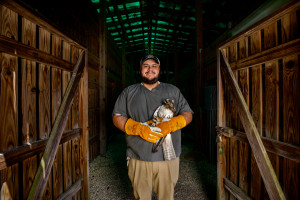 Marco Barrera with a red-tailed hawk

Marco Barrera, student intern, worked at the center from December through April of this year, for which he received three credit hours. A rising senior majoring in biology, Barrera was just as impressed by the people as he was by the raptors.

“Probably the best thing about working there is the people. Everyone is really committed to the job,” he says. “This was my first experience working in a professional setting, and it was great to see how excited and happy everyone is – and willing to put forth so much effort.”

The learning component was everything he could wish for in an internship.

“I could actually see myself doing this,” he says. “It’s been a really good internship. I’d encourage more students to do it, because the center can really use the help, and it’s so educational. It’s a win-win.” 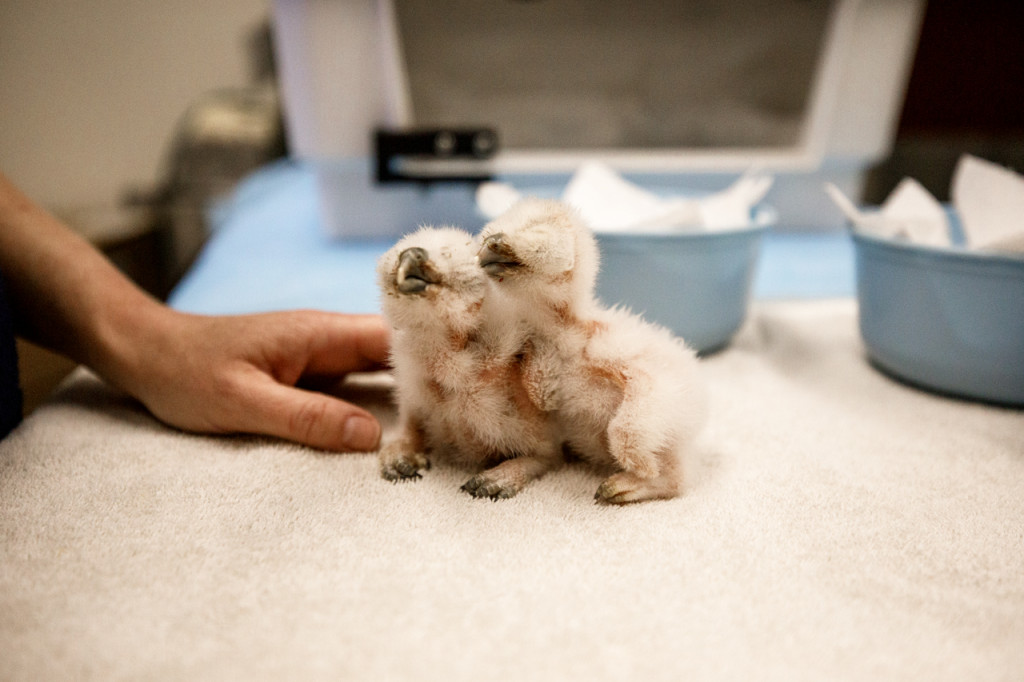