Drama Queen
Playwright and actress Donnetta Lavinia Grays ’99 (pictured above) received a 2021 Whiting Award for drama writing – along with $50,000 – in April. The largest literary prize in the U.S. for emerging writers, the prestigious award allows most winners their first chance to devote themselves full time to their own writing or to take bold new risks in their work. The Brooklyn-based artist was cited for her “revelatory” portrayal of family where “we come to know her characters as deeply as anyone in our lives.”

“The Whiting is a tremendous honor,” says Grays. “It’s humbling to be recognized and held by the literary community in this way. Personally, it is a thrill to have my work listed alongside some of those giants in the theater whose plays have guided my way both on and off stage. What the cash award provides is time. Which is mostly what writers need – the freedom to do what we love without the burden of hustle. I get to write, and that’s the real blessing.” 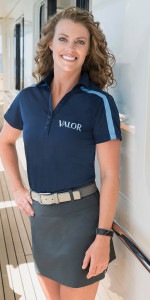 Strutting Her Stuff
After a star turn as a deckhand on season five of Bravo’s Below Deck reality show in 2017, Baker Manning ’09 has published a pair of digital guides to getting a job in the yachting industry, available on her website, bakermanning.com. The granddaughter of Arthur Ravenel Jr. ’50, Manning landed the show after a casting agent saw her LinkedIn profile, which includes stints as a deckhand/stewardess starting in 2013.

“Working on the show was a pretty crazy experience, but a lot of fun,” she says. “Most of our crew members were very inexperienced, so there was no shortage of drama. We were working around the clock on a 160-foot mega-yacht trying to cater to demanding charter guests while being filmed the entire time. It was exhausting and exhilarating, and I would do it all over again.”

Wanting to stay put for a while in Charleston, Manning is now the owner of DivaDance Parties Charleston, teaching adult-only dance routines to locals and travelers for bachelorette parties, birthdays, reunions and teambuilding.

“It was a fun way to ease into adulting after yachting,” she says. 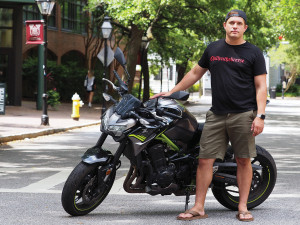 Switching Gears
While covid-19 threw most of us for a loop, Derek Kern ’17 threw COVID-19 for a loop – make that a couple of loops around the country. In June 2020, he quit his job as an apartment leasing agent in San Diego and hit the road on a 2020 Kawasaki Z900 motorcycle, riding to a friend’s house in Augusta, Georgia. He had so much fun he decided to do it again in July, only this time he took along a DJI drone video camera and a GoPro to film his journey. With only a backpack and a satchel, he set off for Astoria, Oregon, stopping in as many national parks as he could. He then beelined it to his parents’ home in Philadelphia in four days, traveling 6,750 miles in one month.

“My goal for this trip was to combine my love of filmmaking and adventure seeking,” says Kern, who now has a new career as a videographer. “I knew I had found something I loved doing and decided to move back to Charleston to see if I could make a career out of it.”

Indeed, he has found enough work in his new profession that he’s now saving money for his next motorcycle trip to South America or across Europe. “The best part was the freedom,” he says. “I also learned a lot about the world and myself. The main lesson is to follow your passions.” 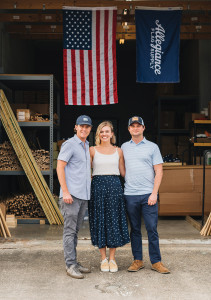 Pledge of Allegiance
If anything should be made in America, it should be the Stars and Stripes, and it should be tough and durable, just like its citizens. Sadly, that’s not really the case, which is why, in 2018, Katie Morgan Lyon ’14, husband Wes Lyon ’13 (MBA) and Max Berry ’13 (MBA) decided to start their own flag company, Allegiance Flag Supply, based in North Charleston.

“We really were having trouble finding an American flag that would really hold up to the elements and do what the flag stands for,” says Katie. “It drove us crazy that some of the ones we bought were made overseas, too.”

Not only are their flags made here in the U.S., but all the materials are, as well. They also created 15 jobs in the process. With prices starting at $50 for a 12-by-18-inch flag, sales were slow until they figured out the right digital strategy just before the pandemic, which is when their e-commerce sales took off. All three quit their corporate jobs last year to focus full time on their startup, none of which would have happened without the College’s MBA program.

Says Berry, “The program exposed us to a lot of entrepreneurs, and that really motivated me to want to be one of those people.” 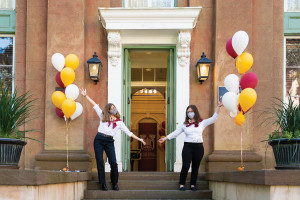 Ringing in the Year
While the pandemic put the kibosh on the traditional ring ceremony this year, the Office of Alumni Affairs was determined to make receiving a ring as special as possible for students. As tradition dictates, the rings spent the night of March 8 in the College’s original classroom, located on the ground floor of the circa 1770 President’s House, which instilled them with 251 years of CofC history. On March 9 and 10, student alumni associates showed students by appointment at Towell Library how to wear their rings until commencement, while also providing a certificate verifying the rings spent the night in the original classroom. President Andrew T. Hsu even stopped by to present rings to as many students as possible. The College of Charleston ring is a “school” ring rather than a “class” ring. As undergraduates, students wear the ring so the seal is upside down. At commencement, new graduates “turn the ring,” just as students at other institutions “turn the tassel,” so the seal is facing right side up. Visit alumni.cofc.edu to find out more.