When Eddie Ganaway ’71 made history by becoming the first African American to cross the Cistern 50 years ago, he didn’t make a scene. He simply took his diploma, walked over to his wife, Elizabeth, and young daughter, Tonya, and hugged them.

“I remember it being a day of happiness and a sense of accomplishment,” recalls Elizabeth. “Of course, he was excited, and there were tears. But he was not the type of person to show a lot of emotion. He was a man of humility.”

Which explains why he never made a scene about being a CofC history maker. In fact, Tonya didn’t find out until she was an adult with a child of her own.

“It wasn’t because my father wasn’t proud of the fact that he was the first, but he recognized that he really didn’t do it by himself,” she says. “There were a lot of people who supported and encouraged him, like my mom, [history professor] George Heltai and [admissions director] Fred Daniels.”

Ganaway came to the College, where he majored in history, in 1968 after serving in the Navy for four years and starting a family. Against the odds, he found a way to balance his family, his studies and a job.

“He had a lot of things going on, and a lot of folks kind of doubted. We said from the beginning, ‘We will show them,’” says Elizabeth, adding that nothing could stop Ganaway from accomplishing his goal of getting an education. “It was his dream for many years to be a student at the College of Charleston, and his dream came to fruition.”

And achieving that dream allowed others to dream, too. 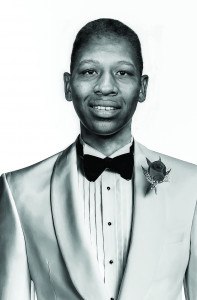 As the College’s first Black graduate, Eddie Ganaway ’71 was a trailblazer in a white blazer.

“In the Black community, education is the key to opportunity,” says Rénard Harris, the College’s chief diversity officer. “To see Eddie cross the Cistern made it a reality for so many others. It opened the floodgates of opportunity.”

Although Ganaway passed away in 2013 after a career as a history teacher and insurance claims adjuster, he is still having an impact at the College through the Eddie Ganaway Diversity Learning Center. Part of the Office of Institutional Diversity, it is designed to drive culture-changing initiatives that empower and shine light on identities that have been marginalized.

But perhaps his most meaningful legacy is what his example means to his children and grandchildren. His oldest grandchild, Maya, often takes what she learned from her grandfather and applies it to her own life: “Where there is a will,” she says, “there is a Ganaway.”

For his oldest son, Cross, Ganaway’s achievements are personal.

“I remember since I was a kid, all of the time, when me and my dad would sit around and solve the problems of the world. He was the smartest guy I knew. And I felt that he cared about what I thought,” he says. “I’m so proud that he graduated from the College 50 years ago, and I really appreciate how much love they have shown him.”

“When I reflect on the life of Eddie Ganaway, I think of how he inspired everyone he came in contact with,” he says. “My father was the leader in his family and a leader in his community. His being the first Black man to graduate from the College is just another testament to what he did best. In my eyes, he was a trailblazer and a bellwether of change. He taught me to challenge the norm and test the rules. Eddie Ganaway is an inspiration, a hero, a testimony and, most importantly, my father.”