It was a dark and stormy night in May 2018 when Bobby Boessenecker‘s phone rang unexpectedly at 11 p.m. as he sat inside his warm Charleston apartment. The caller needed Boessenecker’s help to collect a muddy skeleton at a construction site in Summerville, South Carolina.

“Just put a tarp over it,” Bossenecker told him. “I’ll come join you tomorrow in the daylight when it stops raining.”

This was a cold case if there ever was one: the victim died about 25 million years ago, and the skeleton was so fragmented that Boessenecker was the only one in the state with the technical skills  to piece it back together. But there was no crime committed. The caller was an amateur fossil collector who found a prehistoric dolphin in the Chandler Bridge Formation, and Boessenecker, a marine mammal paleontology expert, is a research fellow in the College of Charleston’s Mace Brown Museum of Natural History.

While the dolphin ended up being a nice addition to the collection at the museum, the real discovery was the dozens of ancient shark teeth found at the construction site, making it just the third fossil shark nursery in the world and the first nursery on record for Carcharocles angustidens, a megatooth shark that lived during the Oligocene epoch 34 to 23 million years ago.

“What is important is that this shark is not very well known because there are not a whole lot of fossil sites worldwide with rocks between 23 and 34 million years,” says Boessenecker, referring to the way paleontologists like him time stamp fossils through rock dating. “The Charleston Embayment is one of the few places in the world where you can find lots of marine fossils from the Oligocene epoch. The entire reason I’m here at CofC is to research the whale and dolphin fossils from that period.” 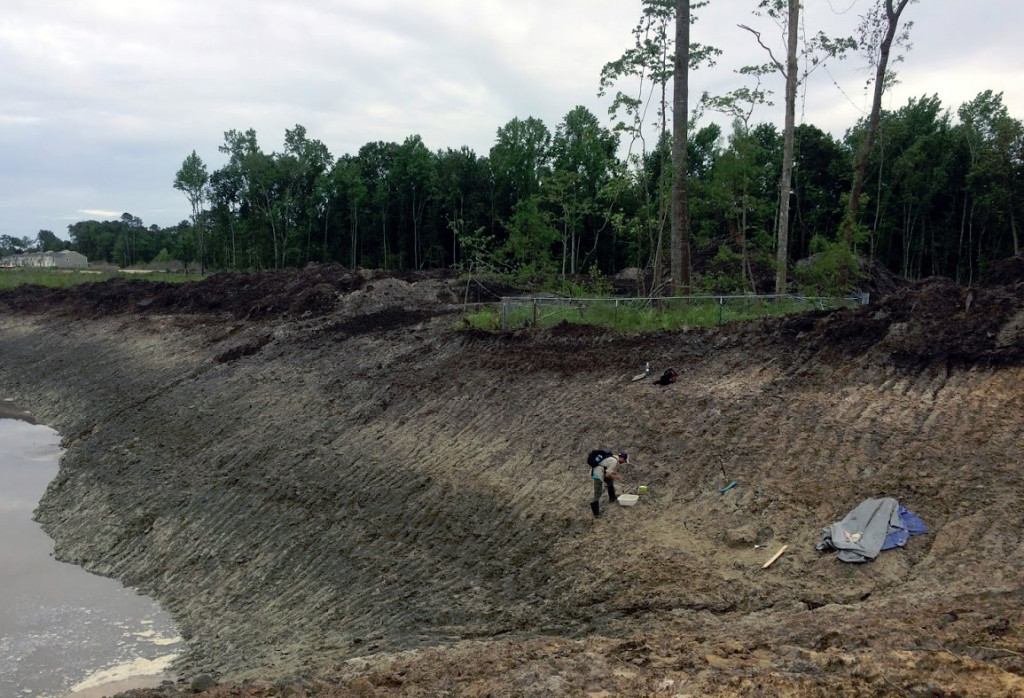 The fossils are rare because a climate crash is thought be responsible for low sea levels during the Oligocene, making most Oligocene deposits below sea level today so scientists don’t know a whole lot about C. angustidens. But just as interesting as learning more about the megatooth shark and what the teeth tell us about the age profile of the shark assemblage there is what they say about the Charleston Embayment itself 25 million years ago. Going from Georgetown in the north to I-95 in the west and Edisto in the south, the embayment was a shallow shelf with easy-to-catch prey for the juvenile megs to eat and grow before heading into the open ocean. 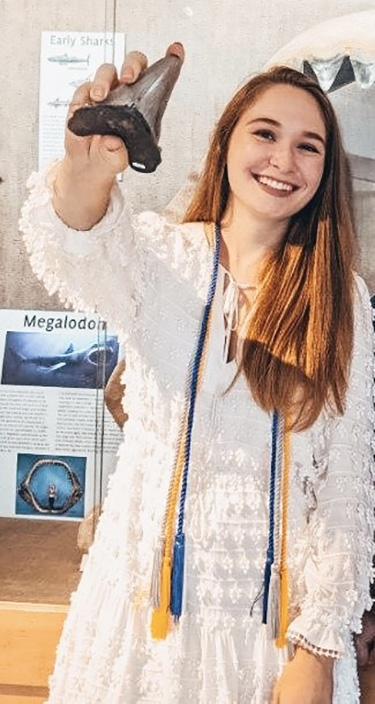 Addison Miller holds the tooth found at the construction site that set the new max total body length for C. angustidens at 8.85 meters.

While Boessenecker and his wife, Sarah Boessenecker, who oversees collections and exhibits for the College’s geology department, spent three months with exclusive access to the construction site collecting 87 teeth, it was Addison Miller ’20 who did all the heavy research lifting, spending the last two years doing body-length reconstructions based on the teeth measurements and jaw location. Miller, who graduated earlier this year with a degree in geology, discovered that the embayment was not only home to the first documented paleo-nursery area for C. angustidens but a new max total body length of 8.85 meters or more than 29 feet.

“This means a lot in the megashark world of paleontology,” she says.

Indeed, scientists know of only one other megalodon nursery, a 10 million-year-old one in Panama. Miller presented her findings on Oct. 13, 2020, at the Society of Vertebrate Paleontology’s annual conference (held virtually) and is preparing a paper to publish in a peer-review journal. And the news of the ancient baby shark nursery generated mega media coverage, even garnering a mention on The Late Show with Stephen Colbert.

But the discovery isn’t all that surprising. As many people know, South Carolina is a shark tooth-hunting heaven, and the reason for that, explains Boessenecker, is that the sedimentary deposits are a lot slower here than elsewhere. A million years on the West Coast, for instance, results in about one kilometer buildup of sedimentary rock, while on the East Coast, it amounts to only about one meter of buildup – a thousand-fold difference leading to much higher concentrations of shark teeth.

“You do not find a whole lot of shark teeth on the West Coast except for a few random localities, but on the East Coast here you’d be hard-pressed to find a patch of gravel anywhere within 20 miles of Charleston and not find a shark tooth after five minutes of looking,” he says. “I’ve only ever found one tooth on a beach in California and that was a miracle. At Folly Beach, you can find a hundred teeth in a couple hours if you look in the right places.” 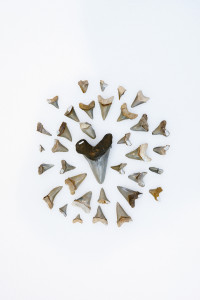 His tip for finding megalodon teeth is to look in the upper strand or high-tide line an hour after high tide where they’ll collect with large quahog shells, phosphate nodules, whale bone fragments and gray limestone rocks. Smaller teeth can be found in the little patches of shell hash closer to the low-tide line; look for anything that’s jet black, not dark gray, and shiny even if they’re dry.

But nothing beats that new construction site in the Chandler Bridge Formation that extends from Summerville to West Ashley. The site where Boessenecker and his wife made their big discovery is now a new subdivision of homes.

“If I were to hazard a guess,” he says, “there’s probably several million teeth under those homes.”