Laying Down the Law

As a legal counsel at Spotify, Mary Canter ’05 should be hard at work. Heaven knows she’s got plenty to do with the new user privacy and data collection requirements that a certain popular operating system just enforced. But at the moment, she’s staring lovingly into her laptop inside her Brooklyn apartment checking on her labradoodle puppy, Bonnie, that she adopted during the pandemic.

“I just put her into daycare, so I’ve been glued to this webcam,” she says.

If anyone understands the lure of streaming content, it’s Canter. With 320 million active users in 92 countries, Spotify is the world’s biggest music and podcast digital distribution platform. Most people assume she negotiates deals with artists, but Canter actually works on the product side of the ad-supported service, supporting product managers, engineers and business teams developing new features or experiences.

“I’m sort of like a cool mom where they want to build something, and I say, ‘Great, let’s do it!’ and give them some ground rules,” she says. “What’s really interesting for me as a lawyer is that the technology is always moving so much faster than the regulations that are applied to it.”

Canter is the oldest of two girls who grew up in the D.C. suburb of Falls Church, Virginia. Her father is a lawyer and her mom is a retired management consultant. During a family vacation to Hilton Head when she was about 10, they made a day trip to Charleston, which included a visit to the College. She decided right then and there she was coming to CofC.

“I can’t imagine not having gone there,” she says. “It was such a meaningful place for me to be.”

She’s still close friends with many of the same people she met in her freshman residence hall, most of whom live in New York City, too. And her experiences as a student are still with her today.

“It sounds like a cliché, but it was really the first time where I was allowed to have big ideas,” says Canter, whose history degree included pursuing an independent study on genocide. “It was a mind-blowing foray into some really difficult subject matter. It changed my perspective on a lot of things.”

Perhaps that’s why she pursued her passion – dance — rather than going straight to law school. Instead, she auditioned and was accepted into the American Musical and Dramatic Academy in Manhattan.

“I wanted to be on Broadway,” she says. “I worked at a coffee shop. It was my La Vie Bohème moment.” 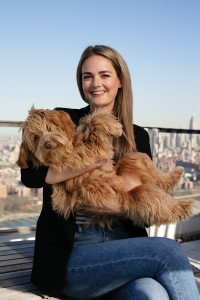 But after a failed audition for the Radio City Rockettes, she decided it was time to become a lawyer, one who supported the arts. In 2011, she graduated from Brooklyn Law School, which has a reputation for producing music-industry attorneys. After a stint as associate producer for modern dance company Pilobolus in New York and then at her dad’s firm in D.C., she got her first in-house legal job at Rosetta Stone before joining Spotify in 2019.

“It is a really exciting place to be,” she says. “Spotify puts a big emphasis on the culture. I know a lot of companies say that, but I really feel it. I never thought of work as a place where I would go to have a social life, but I do there. I can’t say enough good things about the team of lawyers I work with.”

She’s looking forward to the day when she can be back with them in person at Spotify’s very cool, multi-floor office in downtown Manhattan, where Bonnie will never be more than a click away.