Just about every professor dreams of having a big research discovery. For Mary Trent, that eureka moment came in 2016, when the assistant professor in the Department of Art and Architectural History and the students in her new Photography, History and Memories class paid a visit to the Avery Research Center for African American History and Culture to look at 19th-century photo collections. She was hoping to emphasize to her students how people used photography to keep their memories alive and tell their stories, but – when former archivist Barrye Brown set down this thick, leather-bound album with a floral wreath design on the cover and metal clasps on the side – her eyes widened.

“I couldn’t believe it,” says Trent. “It’s such an amazing object. I think just nobody knew about it.” 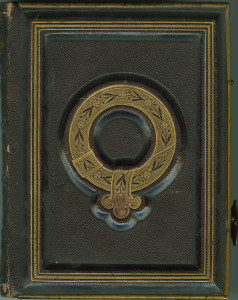 Talk about a story to tell. The family album belonged to Ellen Craft, a light-skinned Black woman who escaped enslavement from Macon, Georgia, in 1848 by pretending to be an elite male enslaver traveling with his enslaved man servant, who was really her husband, William. Traveling first class by steamship and train to the free state of Pennsylvania, they were able to pull off the extraordinary ruse with side money William made as a skilled cabinetmaker. The Crafts became famous after they settled in Boston and their story got out, along with printed copies of a daguerreotype of Ellen recreating her male impersonation, which Ellen included in the album.

“That’s really the image that everybody knows,” says Trent. “But that’s not really her. That’s her alter ego. What about her? I was curious about her as a mother, wife and grandmother. The album presents a collection of images that had been important to the family, but hadn’t been part of the public story before.”

Two of Craft’s descendants – sisters who live in Charleston – donated the album to the Avery in 2010. The 47 images, mostly formally posed studio photographs, are of Craft herself and her children. Pages include handwritten notes about the people depicted, as well as the fingerprints and smudges of four generations of album keepers.

The very existence of the family album also represents freedom. The stability of a multigenerational family was uncommon for families in enslavement since they were regularly broken apart by force. In fact, Ellen’s enslaver/father gave her away at age 11, separating her from her mixed-race enslaved mother because his wife was furious that guests mistook her for one of her children. Even when enslaved families did manage to stick together, they wouldn’t have had the wherewithal to maintain an album. 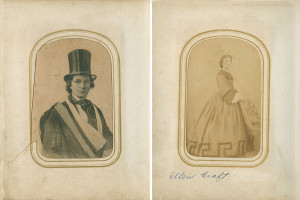 “More often than not, an enslaved person didn’t have the ability to record family history for posterity,” says Trent. “Enslaved persons didn’t usually have the means to purchase and pass down family photographs, and literacy was often illegal for enslaved persons, so notations and records weren’t usually kept. Having a family history that can be recorded and preserved and remembered in an album from generation to generation is a benefit that comes with freedom.”

Trent will publish her findings in the Smithsonian’s prestigious American Art journal next year.