Growing up in Beaufort, South Carolina, Mikel Hannah-Harding ’19 dreamed about working at The Weather Channel. He was fascinated with hurricanes, and instead of watching cartoons, he was glued to the meteorologists on The Weather Channel. In sixth grade, his mother surprised him with a trip to the Live 5 News station in Charleston for his birthday.

“I remember it like it was yesterday,” smiles Hannah-Harding. “Bill Walsh [the chief meteorologist] gave me a tour of the studio. He showed me the green screen along with the system he used to create weather graphics, and I got to talk to him about my interest in meteorology. Years later, I was able to intern at Live 5 News when I was a senior at the College. I can’t thank my mother enough for investing in my meteorological interests at such a young age.”

When it came to college, Hannah-Harding couldn’t find a South Carolina university with a meteorology major. He decided upon the College of Charleston because it had a physics major with a concentration in meteorology. As fortune would have it, in 2017, the College became the only undergraduate institution in South Carolina with a bachelor’s degree in meteorology, right in time for Hannah-Harding to be one of the first to graduate with the major.

After graduating with a double major in meteorology and physics, Hannah-Harding landed a job as a weekend meteorologist and a multimedia journalist at the CBS affiliate in Augusta, Georgia, where he performs a range of responsibilities – from editing and photography to going out into the community to conduct interviews and shoot videos. But his favorite part of the job, of course, is doing the weekend weather when he gets to be in front of the green screen and put his meteorology skills to use.

Thanks to his two years as president of Alpha Phi Alpha Fraternity Inc., a historic African American fraternity at the College, he’s comfortable speaking to an audience. And the meteorology lecture notes from his departmental advisor, Gabriel Williams, really came in handy when he started his job, too.

He credits his success to his community of fellow students, faculty and staff who supported him as an undergraduate, including Sherry Gadsden, retired head of circulation at Addlestone Library, where he worked all four years. And he’s very appreciative of the staff in Admissions, where he worked for a time after graduating, especially Kenyatta Grimmage, Deborah Counts and Michelle McDowell. 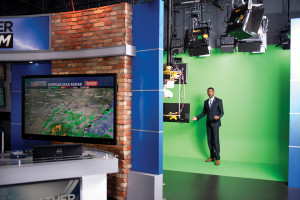 Director of Multicultural Student Programs and Services Rochelle Johnson was also there for him, introducing him to SPECTRA (Speedy Consolidation and Transition), which provides support to first-year minority students. As a SPECTRA LEADer for several years, Hannah-Harding mentored students, for which he was awarded a scholarship.

“Upon introducing himself, he said with confidence, ‘Ms. Rochelle, I will be the first Black meteorologist to graduate from the College of Charleston,’” recalls Johnson. “And I believed he would accomplish his dream. Mikel’s intelligence, work ethic and dedication to his studies placed him on the path to success; also, he surrounded himself with a village of on-campus supporters to encourage and champion his accomplishments.”

Hannah-Harding’s ultimate goal is to become a broadcast meteorologist at The Weather Channel and make his childhood dream a reality. The forecast looks good.