Touched by an Angel

Otis Robinson ’90 grew up about an hour southwest of Charleston in the small rural town of Green Pond, South Carolina, where the poverty cycle meant few residents ever left. Robinson was determined to be one who did. He worked two jobs – days at Wood Brothers, the Green Pond grocery store, and nights as a night auditor for a motel in nearby Walterboro – to get the money to attend the College of Charleston

He started school in 1976, but he had to drop out after a year and a half when he ran out of funds. Dejected but committed to earning enough money for school, he returned to his two jobs, and that’s when life presented Robinson with an unexpected gift.

One day in 1987, a Charleston entrepreneur named David Maybank Jr. walked into the grocery store and struck up a conversation. Maybank, who owned a lot of land in the area, took a liking to the kind, humble Robinson and invited him to drop by his office to discuss his future.

“I thought he was going to help me with jobs,” says Robinson. “Instead, he said, ‘You need skills and the resources to build on the skills, and for that you need an education.’”

Then Maybank made him an incredible offer – to cover his education and expenses until he graduated. Robinson’s immediate reaction was, What’s the catch? There wasn’t any. All Maybank asked was that he try and help at least one other person after he graduated.

Robinson returned to the College in 1988 to complete his degree. “When I first started school, I had no idea how overwhelming the whole process could be,” explains Robinson. “I thought I could make things happen through brute force.”

Fortunately, Robinson had Maybank to mentor him on his second go-round, and along the way, the College awarded him the Waties Waring Scholarship, which supplemented the support he received from Maybank.

Maybank encouraged his protégé to network while at the College, so Robinson took the time and effort to develop relationships with his professors, including Howard Rudd, the founding dean of the School of Business.

“I could tell early on that Otis had a strong work ethic,” says Rudd. “He did what I call bridge building. He fostered relationships with so many of the faculty, staff and administrators. It clearly worked with me. He stopped by to chat often.

“Otis was always enthusiastic, caring and passionate,” he adds. “He embodied the kind of integrity we hope all our students would exemplify. For a somewhat nontraditional student, Otis served as an exemplary role model for any student. He persevered balancing work, a demanding program and helping others in any way
he could.”

Robinson planned on joining the FBI postgraduation, but Maybank came back with an offer of graduate school, saying that he could double the salary of an FBI agent after earning his master’s degree. Together they developed a plan that included studying in Paris for the summer after graduation and attending the University of Virginia Darden School of Business, one of the top MBA programs in the U.S., and Maybank’s alma mater.

“Darden School of Business was a challenge,” remembers Robinson. “I didn’t feel prepared to compete, but my CofC education and my mentors equipped me with what I needed to succeed.”

“I will never forget Otis coming home after his first semester at UVA,” says Rudd. “We met for breakfast at Hardee’s. He was uptight and nervous about his ability to succeed. I said that he had all the tools and that he would excel. I shared my MBA experience – misery does love company. It lifted his spirits to know that his experience was par for the course.”

Bolstered by Rudd’s words and Maybank’s encouragement and guidance, Robinson graduated and quickly landed a job as an associate in MeadWestvaco’s (formerly Westvaco) management program. Over the years, he worked for other companies, including Alcoa Packaging and Consumer Group, Reynolds Consumer Products and United Sporting Companies Inc. 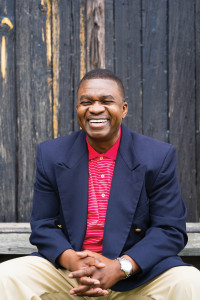 “David and I were in constant contact,” says Robinson. “He came to both my graduations and my wedding to my wife, Angela. I called him my angel – a bright light who showed me so many wonderful things and gave me the resources to do what’s inside me.”

When Robinson decided to embark out on his own, Maybank reached out to his longtime friend Nella Barkley to lend a hand. Co-founder of the Crystal-Barkley Corporation, Barkley helps individuals with their career and life paths.

“David was very quiet about what he did to help people,” says Barkley. “Because he felt Otis needed my expertise, he pulled me in. When I met Otis, I could see why David saw so much potential in him. David would be proud of what Otis has achieved.”

“David taught me how to think, and what I do now is all about problem solving,” says Robinson. “With my business, I help companies improve their processes and create a better bottom line. It’s about being humble and trying to help people.”

Maybank passed away in January 2020. In honor of the man he admired so much and to emulate Maybank’s “pay it forward” legacy, Robinson is committed to supporting the College.

“Often worlds don’t come together,” says Robinson. “David had the courage for the greater good to help one person make a better life. David showed me that I didn’t have to do it by myself. I just had to have the courage and persistence to get through.”

Over the years Robinson has contributed to the College’s Waties Waring Scholarship, but now his plan is to get the scholarship endowed.

“I always thought I would wait until I had the money, but that’s not being courageous,” says Robinson. “I’m going to start with the scholarship, but I want to build upon that by being a mentor like David and Howard were for me.”

Thanks to David Maybank Jr., the College of Charleston has another angel.

Courting Erudition
The Waties Waring Scholarship honors Julius Waties Waring, Class of 1900. Waring served as U.S. district judge for the Eastern District of South Carolina from 1942 to 1952. As a federal judge, he ended racial designations on juror lists and other traditionally accepted discriminatory practices within his court. He ruled in favor of equal pay for Black and white public school teachers and struck down rules of the South Carolina Democratic Party limiting membership and participation in the party’s primaries to white voters only. Many consider Waring’s greatest legacy to be the 1950 Briggs v. Elliott case, where he became the first judge to contend from the bench that “segregation is per se inequality.” His dissent ultimately led to the landmark decision in the 1954 Brown v. Board of Education case, which led to desegregation of public schools. Because of Waring, South Carolina’s racial relations were forever changed.