Geology Professor Explains Cause of Sinkhole Near Campus

On June 15, 2021, the earth opened up on Coming Street, leaving an eight-foot hole in the middle of a main thoroughfare of the College of Charleston campus. The sinkhole stretched 10 feet in diameter and quickly became the talk of the town.

Many wondered, How did that happen? and What is a sinkhole? Thankfully, the College of Charleston has an expert to explain. Professor of Geology and Environmental Geosciences Norman S. Levine studies natural phenomena like sinkholes and earthquakes. As the director of the Santee Cooper GIS Laboratory, the Lowcountry Hazards Center and the South Carolina Earthquake Education and Preparedness Program, he sees movement within the earth as his kind of thing.

The College Today caught up with Levine to find out everything you might want to know about sinkholes and what caused the one near campus.

What causes a sinkhole? 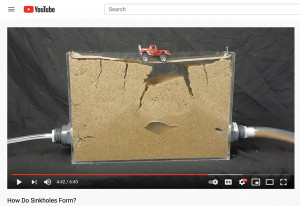 A demonstration on YouTube explaining the cause of sinkholes.

Sinkholes appear when the surface of the land (open ground or roads) drops into cavities or pits in the ground. These underground cavities are normally formed by water eroding and removing material from the underlying rock layers. Most people think of sinkholes in karst areas, which are are areas where the material is dissolved by water over time (similar to salt or sugar disappearing when mixed in water). In karst areas the voids form in limestone, salt beds, gypsum or other carbonate rock where they are dissolved by groundwater circulating through them. Then “piping” (a term used for moving finer material along a pathway) of the sediments and materials above the voids starts, this is where the finer materials are then swept into the voids weakening the materials above and the ground collapses into the voids. In other areas the sediments are mixes of coarse and fine materials and over time flowing groundwater can move the finer material away leaving voids and causing settling of the materials above it. This is called internal erosion.

In the areas where people have placed infrastructure below the surface this piping process of winnowing (removing fines) is very common, and can be come extreme when larger infrastructure fails. Many of the large sinkholes in urban areas form when the infrastructure underground fails. Underground pipes can settle and the joints that open up either enhance the flow of water around them or allow finer material near them to be pulled in and washed away.

Do we know what caused the sinkhole on Coming Street?

The Coming Street sinkhole was the collapse of a pre-Civil War brick storm drain. When something like this happens in our region, the hole is cleared to the edges of the working parts of the Brick storm drain, then concreter pipe with a manhole is placed in the section and the drain lines are repaired 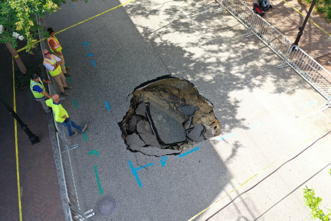 Aerial view of the sinkhole on Coming Street. (Photo by Michael Wiser)

Are sinkholes common in Charleston? If so, why?

In Charleston, the sinkholes we normally see are infrastructure-related sinkholes. In fact, in downtown Charleston, the pre-Civil War drainage tunnels are still working and are the major storm drains across the city. In the past, the storm drains were repaired from the inside; this kept material from filtering into it. As materials are winnowed away through the tunnels, the pressure and support holding the bricks in place shifts and the brick work collapses causing a large void in the subsurface that pulls the material away and the roads sink (get the low broad potholes) or collapse.

How do you fix a sinkhole?

Fixing our infrastructure sinkholes is very different then fixing natural ones. Debris is normally cleared from the natural sinkhole. After that, a cement bottom is usually placed to cover the gaps and piping areas, then the sink is backfilled with material and compacted to keep water flow from dislodging it.