At the College of Charleston, we look out for each other. And, last month, Claudia Chirinos did just that.

After the Department of Public Safety sent out a notice about a man caught on camera when he entered a Sottile House office and stole a laptop computer on June 16, 2021, Chirinos was one of many faculty and staff members who were on high alert.

“I must have gotten seven or eight emails from people saying, ‘I’ve seen that guy! He hangs out here, he hangs out there,’” says Associate Vice President of Public Safety Chief Chip Searson. “So, we knew he’d be back, and it was only a matter of time before we caught him. Criminals have to be lucky every single time they go out – every time. We only have to be lucky that one time: that one time they get caught.” 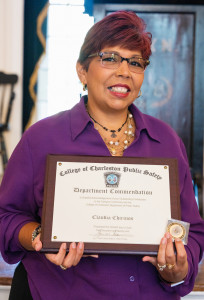 Claudia Chirinos received a framed commendation for her contributions to campus safety.

That one time came a week later, on June 23, when Chirinos saw the same man going from door to door checking for unlocked offices on the second floor of the Lightsey Center.

“She just jumped into action – you can see it on the video – she’s running around, looking down the hallway, looking at the guy,” recalls Searson. “She was just as excited as we were to get the opportunity to catch him in the act.”

“I am always looking out for the safety and security of my workplace and my colleagues – that’s what I’m made up of. Awareness is innate to me,” says Chirinos, the lead customer service representative in the Office of the Registrar, who has had training in emergency response and crime prevention. “My husband calls me Spygate because I don’t miss a beat.”

And, because she didn’t miss a beat, Public Safety was able to stop the suspect in his tracks, positively identify him as the individual in the Sottile House laptop theft and arrest him for this campus burglary.

“Your attention to detail and your willingness to report this individual resulted in a very dangerous violent offender being arrested,” Public Safety Deputy Chief Naomi Broughton told Chirinos at a commendation ceremony held in Alumni Hall in her honor on June 30. “Your actions resulted in solving a crime and is a service that should be recognized. You directly aided the Department of Public Safety, which resulted in service beyond that which is normally expected of an employee.” 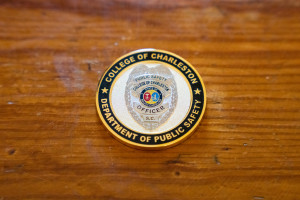 Claudia Chirinos received a Challenge Coin for her contributions to solving a crime on campus.

Chirinos received a framed Public Safety Commendation and a Challenge Coin for her quick actions.

“Your actions very likely prevented further harm and theft that would have been inflicted on our campus,” Searson said at the ceremony. “Thank you for practicing great situational awareness and acting quickly!”

Speaking on behalf of President Andrew T. Hsu, who was out of town at the time of the ceremony, Chief of Staff Paul Patrick said, “President Hsu has said before that the College is an exceptional place because of its exceptional employees, and this just confirms that that is in fact the case: We are exceptional because of the people that work here. So, thank you, Claudia, for what you did in this instance.”

“As a member of the College of Charleston community and even closer member of the registrar’s office, it is my duty to keep myself and team members safe,” says Chirinos, who joined the College in April 2020. “Working together for the greater good is one of my core values!”

Tagged with: faculty and staff • office of the registrar • public safety • staff

#CofC Bound! ❤️ Can't wait to see you soon on