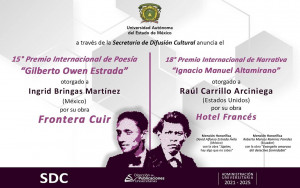 This international literary award is sponsored in part by the Universidad Autónoma del Estado de México. Carrillo-Arciniega’s novel was chosen out of 750 novels submitted by authors from 27 countries.

“This prize means a lot to my career as a creative writer in Spanish,” says Carrillo-Arciniega. “This is my fourth novel and the second that has been recognized, this time with an international distinction. It’s good to know that all those hours in solitude are reaching someone and all my disquisitions also can answer questions that we all have about the human condition.”

Hotel Francés pokes holes in the mythical structure of the “close-knit” Hispanic family. The story shifts between present-day Virginia and Mexico in the 1960–1970s and is narrated by the son, Ricardo Arnau, who escaped the violence of his childhood and moved to Kentucky, leaving his family behind. Years later, Arnau returns to Mexico to gather his deceased mother’s belongings. As he sifts through letters and photographs, he begins to see his mother in a new light. Despite all suffering she caused her children, she was simply a woman trying to survive, and transcend, her circumstances.

“The son is reflecting on his mother’s story through the things she left behind,” says Carrillo-Arciniega. “I wanted to explore the construction of a family and the dangers of mental illness and abuse. Storytelling is enduring. It’s a way to transcend your family story like the final stage of Erikson’s stages of development.”

Carrillo-Arciniega grew up in Baja, California, and dreamed of being a writer from a young age. Influenced by authors like Roberto Bolaño and Paul Auster, he is a prolific writer of poetry, fiction and memoirs. He earned his Ph.D. in modern foreign languages and literatures at the University of Tennessee, Knoxville, and has been teaching Latin American film and culture classes at the College for 16 years.

Finding time to write while teaching a full load of classes is challenging, but Carrillo-Arciniega says it’s important to put your work out there. He wrote another novel during the pandemic that reflects on the fragility of life and love and the power of viruses.

“Writing for me it is a way to explain and understand the questions we are afraid to ask to ourselves,” he says.