Above: Kendra Stewart (center) and former Charleston Mayor Joe Riley (right) speak with finance officers from across the country during a leadership event hosted by the Joseph P. Riley Jr. Center for Livable Communities.

It’s not often you get to see an institution’s namesake speak at a conference hosted by the very organization that bears his name, but such was the case recently when Joe Riley, the 10-term mayor of Charleston from 1975 to 2016, delivered a talk at the School of Business’ Tate Center. 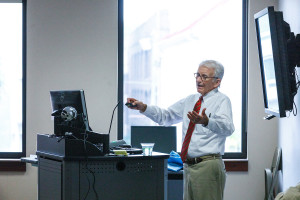 “My work as mayor was to seek and achieve excellence, not to be satisfied with the status quo,” he told members of the Government Finance Officers Association (GFOA) at their national leadership academy presented by the College of Charleston’s Joseph P. Riley Jr. Center for Livable Communities. “Nothing is pre-ordained or lasts by itself without continued upkeep.”

Riley was ostensibly talking about the need to invest in the beauty of their cities, but he might also have been talking about the mission of the Riley Center itself. For 20 years, the center has helped local governments and nonprofits improve through professional development programs, as well as through important research and consultation. With access to the resources of the School of Humanities and Social Sciences, the interdisciplinary center leverages the intellectual assets of the College to support the economic and cultural vibrancy of the City of Charleston and other communities throughout South Carolina, the United States and around the world.

“We do a lot of different things to empower individuals or organizations to build their capacity to be able to better serve and make communities more livable,” says Kendra Stewart, a political science professor at CofC who has been running the center since 2010. “We are definitely now the one place in South Carolina catering to local government, but the GFOA seminar shifts us to doing things on a national level.” 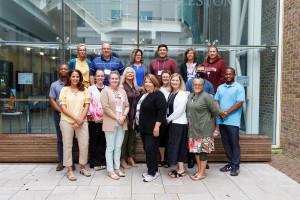 A total of 19 officials from across the country attended the GFOA Leadership Academy at the College of Charleston.

Nineteen officials from across the nation attended the weeklong leadership academy, held Aug. 2-6, 2021, to bolster their leadership and management skills. In addition to Riley, who is somewhat of a legend in local government circles, other speakers at the workshop included Riley Fellow Bob O’Neill, former county executive of Fairfax County, Virginia, and executive director of the International City/County Management Association; as well as two leading academics in local government administration: John Nalbandian from the University of Kansas and Kim Nelson from University of North Carolina at Chapel Hill.

“We’ve been doing something like this for many years at large universities and realized that it was becoming too cookie cutter,” says Chris Morrill, GFOA’s CEO. “But in creating the program with Kendra and Bob, we developed a program with a rigorous academic approach but one that is also highly practical because of the nature of the Riley Center. Charleston itself is also a great case study of how local leadership can make a difference.

“President Hsu even greeted us when we arrived, which is not something that would happen at a bigger university,” he adds. “It’s just a really welcoming atmosphere where people can relax and have the space to hear from leading researchers on government leadership. It just sets the right tone for them to bring the skills back to their community. Of course, the beauty of the campus and the great food here didn’t hurt.” 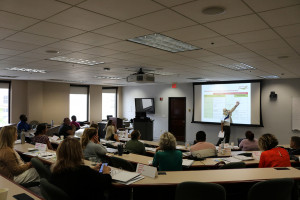 John Nalbandian, professor emeritus from the University of Kansas, speaks about administration in local government during the leadership academy.

The Riley Center, which is located at CofC at WestEdge on Lockwood Boulevard, also offers training programs for local government managers, administrators, clerks and treasurers, but its newest program is taking direct aim at Joe Riley’s legacy: the Riley Mayors’ Design Fellowship. It’s a three-day civic design seminar for mayors of South Carolina towns. What makes the design fellowship unique is that small-town mayors can also participate, which is not the case with the national one, the Mayors’ Institute on City Design, which Riley helped create for mayors of larger cities.

“As you can see from his speech, he’s very passionate about city design,” says Stewart. “But there’s really only a dozen cities in the state that can qualify for the national institute. We just finished our third class of the Riley Mayors’ Design Fellowship. We’re really proud of it.”

Stewart is also excited about some of the local work the center has been doing in the tri-county area. For instance, the center just helped Charleston County create a strategic plan and a set of priorities on how the county will spend the $80 million it’s getting from the federal government as part of the $1.6 trillion American Rescue Plan Act (ARPA). The council passed it unanimously – a rare occurrence.

“We were really honored to be given the opportunity to help our county leadership think through how they can best use these funds to serve the people in Charleston,” says Stewart. “It’s always exciting to work with people committed to public service and to help them be successful.”