Just over 3,000 new faces (2,440 freshman and 620 transfers) are on campus getting their start at the College of Charleston this semester. These students come from 42 different U.S. states and 14 different foreign countries.

Among them are five sets of twins, numerous high school valedictorians and plenty of ambitious people bent on making the world a better place in their own, unique ways. Collectively, they are explorers, creators and achievers.

Let’s get to know a few of the College’s newest Cougars. 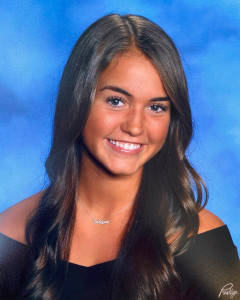 Meet Keira Young. If you’re a fan of the product-pitching show, Shark Tank, you might already know about her. Along with her two older siblings, Christian and Kaley, this Long Island native appeared on Shark Tank this spring to pitch a product that her late father had spent several years developing.

Young’s father was a New York City firefighter and a chef, but he passed away before he could bring his invention – a unique cutting board and attachment – to market. The siblings decided to do that in his honor. Their appearance on Shark Tank was understandably emotional, and the pitch so resonated with the ‘Sharks,’ that all five ended up investing. (The Youngs have since licensed sales to Williams-Sonoma.) That appearance caught the attention of numerous media outlets, including Good Morning America, where all three of the Young siblings later appeared to tell their story.

Keira Young says she’s excited to start at the College. She chose to come to CofC because she wasn’t interested in a big university, but she wanted to be in a city environment.

“I’m from a small town where you tend to know everyone,” she says, “and I like that scale. Also, one of my best friends and her sister are students here, and when I visited them, I really fell in love with this city. For me, CofC is a good fit.” 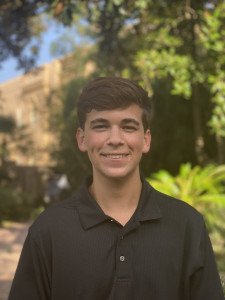 Another young entrepreneur who’s starting at the College this semester is William Helfgott. A native of North Augusta, South Carolina, he’s the founder and CEO of River Bluff Honey, which he established just over three years ago. Helfgott’s honey and honeycomb products are now sold in 35 retail outlets across the region.

A Charleston Fellow in the Honors College (who is also a Swanson Scholar), Helfgott says his beekeeping enterprise triggered an interest in supply chain management. He hopes to double major in that and Spanish, and perhaps get a minor in entrepreneurship.

“I’m a legacy student,” he says, explaining that “my sister attended CofC (Alexandra Helfgott ’19), and my brother Jonathan Helfgott is a senior here now. Through them, I’ve been familiar with the College since before high school. I knew I wanted to enroll here because of all the strong academic programs.”

Aside from shouldering a full academic load, he’s also participating in the Entrepreneurship Living Learning Community, but those commitments aren’t limiting his plans for a social life. Helfgott says he’s very much looking forward to meeting new people and making friends this semester.

“I come from a very small high school with only 25 students in my graduating class, so it’s exciting to be at the College with so many other people starting this year,” he says. 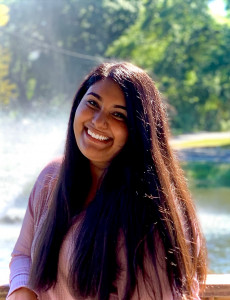 And then there’s Bhoomi Gohil, who got her start at the College earlier this summer as a participant in the SPECTRA program. Gohil is from North Myrtle Beach, South Carolina, and says she chose CofC because of its campus.

“I’ve always liked Charleston as I grew up not too far away,” she explains. “Being in the city is great, but also going to school here, that really appeals to me. For me, the campus is amazing. While I was in SPECTRA this summer, I realized that Charleston just feels like home.”

Gohil has plans to study international business. In fact, she’s already declared that as her major.

“I want to learn about business,” she says, “but in the future, I’d also like to work in a capacity that will allow me to travel internationally.”

Having participated in SPECTRA, Gohil already has a network of friends in place and she’ll be sharing a suite with two students she knew in high school.

“I’m definitely interested in meeting other people,” she says “but that will happen. I may join the Asian Student Association, and possibly the Rotaract Club, but other than that, I’m planning to focus on academics this year.” 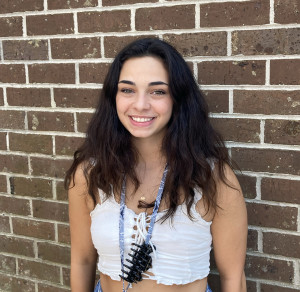 Jordan Barile shares that outlook. She comes to the College from Manahawkin, New Jersey, with plans to study electrical engineering. Barile, another Honors College student, says she’s eager to jump in with both feet.

“I like to be busy and dive right into things,” she offers. “I chose the College because I know I’ll be in smaller classes and get more access to professors. I’m the kind of person who learns better in one-on-one situations, so it’s great that this program affords that.”

And electronics and technology are two things that Barile has always enjoyed.

“I’ve always been pretty good at math and science,” she says, “and I actually enjoy doing that kind of work. Also, ever since I was little, my dad has been telling me that I should be an engineer. Initially, I thought it would be boring, but it turns out to involve everything that I like to do.”

“I really don’t know the South,” she admits, “but I’m ready to learn about it. I want to get to know the food and the culture. Already, I know that I love sweet tea. We really don’t have that at home, so that’s a start.” 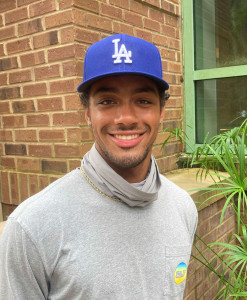 Brevin Striewe is another out-of-state student. He grew up mostly in Chicago, but attended high school in Atlanta. It was during that time that he discovered Charleston and the nearby beaches. Since then, he’s been an avid surfer.

“When I was looking at colleges,” he says, “I narrowed my search to coastal universities, and I knew that I wanted to be in a city. My mom used to live here and she has a lot of friends who went to CofC, so I talked to some of them. They had nothing but good things to say about the College. Anthony Johnson ’97 told me that I’d be crazy not to enroll. He said, ‘You’re going to have so much fun.’”

Earlier this summer, before he enrolled in the SPECTRA program, Striewe injured himself while surfing. That led to a visit to a local chiropractor (Stephen Khouri ’98), and his experience there prompted him to consider chiropractic medicine as a profession. Now, he’s intent on majoring in exercise science so that he can pursue that path.

In the meantime, the thing that Striewe is most looking forward to this semester is having class in-person.

“Last year, my classes were mostly online with a couple of hybrid courses. It was tough. That didn’t really work for me,” he says. “So, I’m definitely looking forward to connecting with professors and classmates. It’s going to feel more like a community than just doing this on your own.” 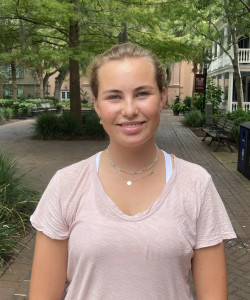 And, from Oslo, Norway, meet Fredrikke “Freddie” Foss. She’s a competitive sailor who will be racing on the College’s varsity sailing team. When she learned as a young teen that you can combine academics and sports at U.S. universities (unlike in much of Europe), she knew she had to attend college stateside.

Foss says that South Carolina was completely foreign to her when her coach (Reed Baldridge ’16) recommended that she apply to CofC.

“I really didn’t know anything about this state, but my mom and I decided to visit colleges in the U.S. After two rainy days visiting schools around Boston, we arrived in Charleston. It was October and it was over 100 degrees, but the city was so beautiful, and the tour guides were amazing,” she recalls. “I met up with the sailing coach and was invited out on the water to sail with the team. After that, there was really no question regarding where I wanted to go to college. CofC was my dream school.”

Regarding academics, Foss says she may pursue supply chain management as a major.

“There are so many majors to choose from at the College, it’s exciting,” she says. “Charleston seems like a great place to study supply chain management because it’s an international port. Still, I promised myself that I’ll remain open-minded and try other subjects as well.”

“My roommate has a car,” she says, “so we went out to Folly Beach yesterday. Wow! I was so excited to see that. I’ll be out there as much as I can. But I’m also excited to meet new people and learn about the places that they’re from. Oslo is really a small city, so I’m grateful that I have the opportunity to get to know some of the rest of the world through the College.”