Above: A statue of Judge J. Waties Waring behind Charleston’s federal courthouse honors the CofC alumnus and U.S. district judge for his contributions to the civil rights movement, including helping bring about the end of segregated public schools. (Photos by Heather Moran)

Judge J. Waties Waring (1880-1968) was an eighth generation Charlestonian, son of a Confederate veteran and a descendant of slave owners. An influential member of the city’s white political class, Waring had every reason to perpetuate the power structure that preserved his status in society. But his conscience and an ever-evolving perspective on justice, equality and the law eventually got the best of him. His rulings and legal maneuverings helped lay the groundwork for the 1954 landmark U.S. Supreme Court decision Brown v. Board of Education, which declared racially segregated public schools unconstitutional.

Listen to the CofC Podcast: How a White Southern Judge Helped Overturn “Separate But Equal” 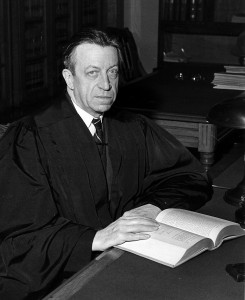 A College of Charleston graduate (Class of 1900), Waring was a self-taught lawyer who, after many years of hard work and patience, was named a U.S. District judge for South Carolina by President Franklin D. Roosevelt, a dream come true. In 1942, a week after the Japanese bombed Pearl Harbor, Waring ascended to the bench at the federal courthouse in downtown Charleston. For the next decade, he worked tirelessly to desegregate schools and advance civil rights. Despite the personal risk, he pursued justice for all.

The story of Waring’s journey from his privileged place in society to an advocate for civil rights was buried for nearly a century, until a group of impassioned individuals revived his narrative. In 2011, State Supreme Court Chief Justice Jean Toal and U.S. District Judge Richard Gergel held a conference highlighting Waring’s legacy. At the time, most Broad Street lawyers had never heard of Waring because for years no one talked about him. He was, according to The Post and Courier columnist and author Brian Hicks, “persona non grata” within legal circles and Charleston’s elite. 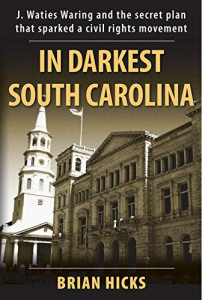 Learning of Waring’s legacy was a revelation to many local attorneys. “They said, oh my God, this man is responsible for the most impactful legal decision of the 20th century,” notes Hicks. “He did this in the courtroom where we practiced, and we didn’t know it.”

Hicks chronicled the judge’s tumultuous journey in the book, In Darkest South Carolina: Judge Waties Waring and The Secret Plan That Sparked a Civil Rights Movement. He donated all of his papers and research on Waring to the College’s Special Collections. The Avery Research Center for African American History and Culture also has materials about Waring and his impact on civil rights.

The journey began in 1944 when the judge was faced with his first civil rights case involving pay equity between Black and white teachers. What started with teacher pay, quickly moved to voting rights, which NAACP lawyer Thurgood Marshall, later the first African American Supreme Court justice, argued were essential, human rights. Waring agreed with Marshall and that was the beginning of a decades-long relationship of mutual respect.

Throughout his storied career, Waring wore a path between Charleston’s “Four Corners of the Law (St. Michael’s church not pictured).

In 1946, the brutal beating of Isaac Woodard, a Black Army sergeant on his way home after serving in World War II made national headlines. When the police chief was acquitted by an all-white jury, the blatant injustice ignited a passion in Waring, redirecting the course of history.

Tensions mounted over the next few years and in July 1948, Waring ordered the state’s Democratic Party to open its primaries to African American voters, saying “It’s time for South Carolina to rejoin the union.” His bold statements shocked the community, and Waring and his wife, Elizabeth, were ostracized from Charleston society. Eventually, tensions grew so high that on Oct. 9, 1950, the Warings’ home at 61 Meeting St. was attacked by unknown assailants who threw rocks and bricks, shattering a window and leaving the judge and his wife fearing for their lives.

The judge was rattled, but not deterred. Security was provided and Waring prepared for his next battle – school segregation – and the case that would change history. Hicks writes that Waring was very intentional about his plan and used the case of Briggs v Elliott to challenge the notion of segregation. The case was named for Harry Briggs, one of 20 parents who brought suit against the president of the school board for Clarendon County, South Carolina. Marshall argued that segregated schools harmed Black children psychologically and violated the 14th Amendment’s guarantee of equal protection under the law. 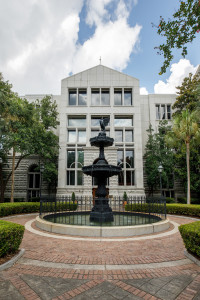 In 2014, Charleston’s federal courthouse was renamed the J. Waties Waring Judicial Center in honor of the judge and CofC alumnus.

In a forceful dissent, Waring wrote that segregation was “per se inequality” making him the first federal judge to take that position on “separate but equal” since Plessy v. Ferguson in 1896. His words became a rallying cry for equality.

The Briggs case served as the template for other cases challenging school segregation, which were eventually combined into the groundbreaking Brown v. Board of Education and led the U.S. Supreme Court to declare racial segregation in public schools unconstitutional.

In 1952, Waring retired and moved to New York with Elizabeth. Today, nearly 50 years after his death, a statue of Waring stands in the garden behind Charleston’s federal courthouse, which in 2014, was renamed the J. Waties Waring Judicial Center. Together the statue, courthouse and biography written by Hicks honor an esteemed alumnus and an overlooked hero of the civil rights movement.

Not only does Waring’s legacy continue through the impact of his rulings from the bench, but also through philanthropy at his alma mater.

Otis Robinson ’90 and his wife, Angela Cooper-Robinson, reestablished the Waties Waring scholarship in 2020. Robinson was a recipient of the scholarship while studying business at the College.

“When I think of Judge Waties Waring, courage comes to mind,” says Robinson. “The courage to do what’s right even when it’s unpopular and doesn’t benefit you. The courage to do what’s right because he ‘could’ and not because he had to. The Waties Waring scholarship not only benefitted me financially, but it also gave me the opportunity to get to know a person with outstanding courage who was willing to step out to help those who could not help themselves in uncertain times.”