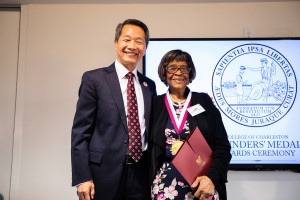 CofC President Andrew Hsu honored Lucille Whipper with the College’s Founders’ Medal during an event in January of 2020.

A lifelong trailblazer, Whipper, with her classmates from the Avery Normal Institute, unsuccessfully sought to integrate the College in the 1940s. She went on to earn degrees in economics and sociology at Talladega College in Alabama before becoming the College’s first Black administrator in 1972, when she joined the university to direct its Head Start program and develop diversity programs.

Prior to joining the College, Whipper was a teacher, a guidance counselor and a public school administrator in Charleston County, serving at Haut Gap Middle, Bonds-Wilson High and Burke High schools. She was also active in the emerging civil rights movement in Charleston and worked toward greater political empowerment, such as voter registration drives.

Wanting to preserve the history of her high school alma mater, the Avery Normal Institute, a segregated school that served Black students from just after the Civil War in 1868 until 1954, Whipper worked to see the institute join the College as a way to preserve the school’s legacy and celebrate local Black history. Through her efforts, the Avery Research Center for African American History and Culture opened its doors at the College in 1990.

“Lucille Simmons Whipper was someone who seemed to have lived many lifetimes in the span of just one,” said College of Charleston President Andrew T. Hsu in a letter to the editor published in The Post and Courier. “She was a model for community activism, a model for compassion and a model for turning plans into action.”

In 1985, Whipper became the first African American woman to represent Charleston County at the South Carolina Statehouse, winning District 109. While in office between 1986 and 1996, she was a fierce advocate for women and minorities.

Whipper’s passion for civil rights led to transformational changes not only at the College of Charleston, but throughout the state of South Carolina. The College awarded Whipper an honorary doctorate in 2008 and the highest award given at the College — the Founders’ Medal – in 2020.

“Lucille Simmons Whipper was not only a trailblazer at the College of Charleston, but she was also a history maker for the entire state of South Carolina,” said Hsu. “Representative Whipper will be greatly missed, but because of her many contributions to the community, her presence will always be felt.”