The Albert Simons Center for the Arts, located on St. Philip Street in the heart of the College of Charleston campus, will be closed for the next two years while the 42-year-old building undergoes an extensive multimillion-dollar renovation.

“This has been a long time coming and we’re delighted,” says School of the Arts Dean Edward Hart. “We are so appreciative of the College’s administration for supporting us. You know, when times are tough, very often the arts take it on the chin. And our administration has shown the foresight to really stand by us with this project, which indicates that the arts really are a priority for the College.” 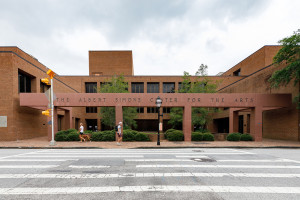 The Albert Simons Center for the Arts first opened in 1979.

Completed in 1979, the Simons Center was constructed to serve no more than 800 students. Today the facility serves more than five times that number – and, says Hart, as the main hub of the School of the Arts, it’s time to update the classrooms and performance spaces as well as the building’s technology and infrastructure.

“The Simons Center has been great, but after 40 years, it needs a little work,” he says. “Better facilities make for a better environment. Everybody wants to be in a place where it looks and feels nice, and where there’s appropriate space.”

The project includes renovation of approximately 87,365 square feet. Around 10,893 square feet will be demolished and 22,871 square feet of new building space will be constructed, says Brad Weiland, senior project manager for CofC’s Facilities Management. When the renovation is complete, the updated Simons Center will feature just over 99,000 square feet of classroom and performance space.

Crews spent the summer moving everything out of the center in preparation of construction, which is poised to begin in late September.

“It was really a logistical jigsaw puzzle trying to figure out where everything was going to go,” says Hart, noting that moving pianos, studio art equipment along with typical classroom furniture was a lengthy process with some items being sent to other locations on campus and others now in storage.

Five locations around campus will house School of the Arts programs and departments during the renovation: 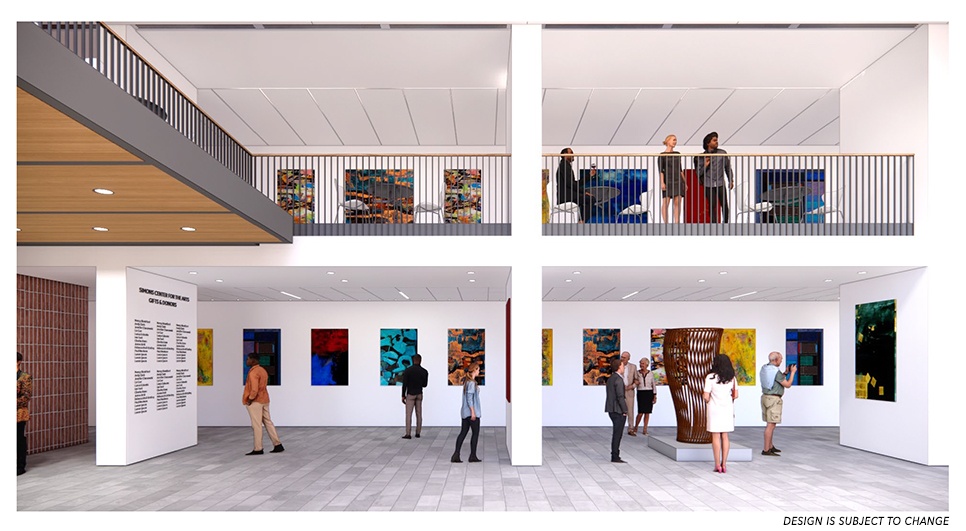 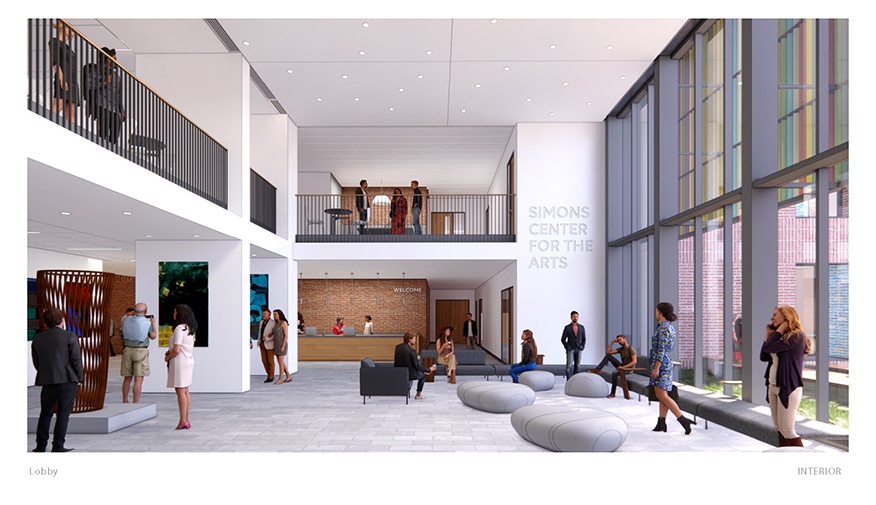 The renovated lobby of the Simons Center will feature large windows and tall ceilings.

With the Recital Hall and the Emmett Robinson Theatre, located within the Simons Center, closed for the duration of the renovation, many School of the Arts performances will be held in the College’s Sottile Theatre as well as the Chapel Theatre.

“Construction will run through 2022, and major completion of the building will take place in the spring of 2023,” says Weiland. “Through the summer of 2023, the project is tentatively scheduled to be fully completed and turned over to the College in time for an estimated opening for the fall 2023 semester.”

Designed by Liollio Architecture and HGA Design Firm, the reimagined Simons Center will have a bright and colorful ambiance that is inviting to students and visitors. Hart says the colors featured throughout the building are inspired by iconic architectural features found on campus such as the blue-green door of Towell Library and the rich coral color of Randolph Hall.

With large windows, a modern façade and carefully chosen brick, Hart says the entrance is meant to subtly grab visitors’ attention as they make their way from the rear of Randolph Hall to St. Philip Street.

“It will look brighter, and I think it will be more noticeable from the street,” he says.

And the new building will give the School of the Arts the opportunity to visually claim its prominence in the city of Charleston’s vibrant arts scene in lock-step with the school’s new tagline branding itself “The Artistic Heartbeat of Charleston.”

“There really isn’t an artistic institution in this town that we aren’t somehow involved with, whether it’s a direct relationship or partnership or whether it’s our graduates that are over there or our faculty members,” says Hart, noting the School of the Arts’ connections to Spoleto Festival USA, Piccolo Spoleto, the Charleston Symphony, the Charleston Gaillard Center, the Preservation Society of Charleston as well as area theater and dance companies and art galleries. “We can just go on and on, and I think it’s time for us to claim that. Charleston is an arts city and we’re at the heart of it.”