The College of Charleston community is invited to kick off the LCWA World Affairs Signature Series: Black Lives on Thursday, Sept. 9, 2021, with a performance by the Grammy Award-winning band Ranky Tanky, which includes several CofC alumni.

The concert, co-hosted with the Office of Student Life, will take place at 7 p.m. in the Sottile Theatre and is open only to students, faculty and staff, who are asked to RSVP in order to attend. Faculty, staff and students should bring their Cougar ID to enter the theater. Masks and social distancing are strongly encouraged during the event.

Black Lives is the 2021-22 World Affairs Signature Series sponsored by the School of Languages, Cultures, and World Affairs. In the spirit of the Akan aphorism “Sankofa,” which emphasizes the importance of looking to the past to understand the future, this series features events and a range of courses aimed at enhancing the understanding of Africa and people of African descent across time and space. Past World Affairs series have focused on Cuba and global foodways. 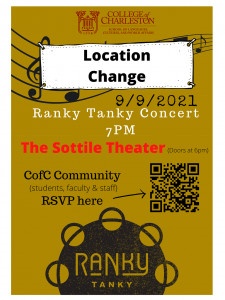 Director of African Studies Christopher Day ’95 and Graduate School Dean Kameelah Martin, formerly the director of the African American Studies, are co-directing this year’s series on Black Lives after beginning a dialogue about how their two programs could partner on events and educational opportunities to better highlight their fields.

Martin and Day agreed that Charleston-based band Ranky Tanky would be perfect as the featured act for the inaugural event of this year’s World Affair Series. Ranky Tanky features CofC alumni Clay Ross ’98 on vocals and guitar, Quentin Baxter ’98 on drums and Kevin Hamilton ’95 on bass along with Charlton Singleton on trumpet and vocals and Quiana Parler on vocals. Ross, Baxter and Hamilton all majored in music as students at the College, and Baxter previously served as adjunct faculty at CofC, teaching jazz percussion.

The group’s name, Ranky Tanky, is a Gullah Geechee term loosely translated as “work it” or “get funky.” The band takes a modern approach to the traditional sounds of Gullah Geechee music, which is rooted in the cultural traditions passed down from the West African enslaved in the sea islands of South Carolina, Georgia and North Carolina. In 2020 the group won the Grammy for Best Regional Roots Music Album for its sophomore release “Good Time.”

“The Gullah Geechee culture sits at that intersection between Africa and the experiences of the African Diaspora,” says Day, who attended CofC with Ranky Tanky’s bassist Kevin Hamilton. “And I thought, ‘This is what we’re trying to do here.’”

The goal of the series, says Martin, is to raise awareness about the rich work happening at the College in the fields of African and African American studies.

“I thought, there’s enough of this type of scholarship and teaching happening on campus that we really need to better organize our efforts and really put some muscle behind all of the amazing things that our faculty, staff and students are doing,” says Martin, noting that with the increased visibility of racial health disparities due to the pandemic, the death of George Floyd, the ongoing attention on the Black Lives Matter movement, racial injustice and anti-racism dialogues it seemed like a good time to elevate these subjects. “We know that it’s being talked about out in the world, and we’re at an institution of higher learning, right? So, where else to talk about it and really give it some airtime then right here on our campus.”

Day agrees, adding that Charleston is home to a variety of African American communities with deep connections to Africa, from where many of their ancestors came as enslaved people. Those connections offer a unique opportunity to showcase the connection between African and African Diaspora experiences.

“We want to put this stuff into the bloodstream of the College of Charleston,” says Day, who is an associate professor of political science. “With what’s happening in the country and arguably around the world, it’s not irrelevant. And we think that it could be a comparative advantage to learn and study these things at the College of Charleston in a city where they might actually matter more than in other places.”

For more information on the World Affairs Signature Series: Black Lives and upcoming events, visit the series blog. Other key events organized through the series include: