With hopes for a better life, Martina Abbriano ’19 – together with her parents and three siblings – immigrated from Italy to the United States in 2014. They knew little to no English, but her family quickly relocated to Charleston after her parents found work and started their new life in their new home. 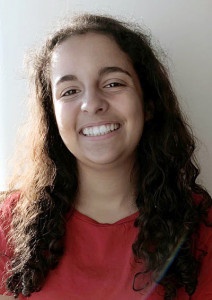 A talented individual with a love for languages, Abbriano knows Italian, Spanish, English and Sicilian fluently, and has a strong base of Vietnamese and Ancient Greek. It’s clear this Italian native has a passion for foreign languages, which she decided to put to use when she began thinking about a career. She earned undergraduate majors in foreign language education and Spanish from the College of Charleston in 2019, where she also minored in linguistics and Ancient Greek.

“I am not sure what led me to my love for languages,” says Abbriano. “At the beginning it was definitely the cultures and the people who spoke those languages that intrigued me. Later on, I figured that I was ‘naturally’ good at learning and speaking different languages.”

Since graduating two years ago, Abbriano has put those skills to use as a foreign language teacher at Wando High School in Mount Pleasant, South Carolina, where she teaches Spanish.

Her passion for languages and her journey as an immigrant having to learn a new language in a new country has led her back to CofC to help the next generation of English language–learners as they begin their lives in the United States. Abbriano is now a graduate student at CofC taking an English as a Second Language (ESOL) course to earn ESOL certification, which is available online.

“I am completing the M.Ed Language program in ESOL because I want to have an educational impact on other ESOL students in the Charleston area,” says Abbriano. “I want to ‘pay back’ the education and opportunities I received by helping and teaching other immigrants like me.”

Despite all the languages she knows, Abbriano is focused on Spanish because she realizes Spanish is an important language in the U.S. She plans to teach Spanish at the high school level for a few years with hopes to return to school to earn a doctorate in linguistics. Some of her career goals include researching new ways to teach Spanish that will be meaningful as well as mentoring and working with other teachers in finding new and engaging ways to teach foreign languages.

“Moving to a different country can be stressful, and not being able to communicate has a lot to do with that stress,” shares Abbriano. “Learning a foreign language is a complicated process that takes time, energy and hard work. The ESOL classes provide kids with a safe space where they can practice their language skills without being judged.”

Though many see learning a new language as daunting, there can be many benefits including better communication in everyday life in a country like the United States that is such a melting pot of cultures and people. Emily Beck, director of the College’s M.Ed. in Languages (ESOL and Spanish) Program and the ESOL Certificate Program, shares why learning foreign languages are more important than ever.

“The COVID pandemic has shown us all first-hand how interconnected our world has become,” explains Beck. “Studying languages and cultures allows us greater insights into differing perspectives about the world and how to best appreciate those differences. World languages and ESOL teachers are crucial guides in helping students learn the ability to calmly engage in dialogue with those whose opinions differ from our own and prepare the next generation of globally engaged citizens.”

Katherine Jordan is a junior at the College of Charleston, double-majoring in English and music.