An engineering truism is that it takes a sturdy foundation to develop a sound design. The same
may be said about the College of Charleston’s new engineering program, the first in CofC’s 250-year history.

The program aims to build upon the College’s liberal arts and sciences tradition to produce a highly skilled and intellectually versatile workforce pipeline to support the region’s high-tech, manufacturing and engineering design industries. While developing the program, the College discovered that perhaps the most important truss is philanthropy.

“Philanthropy is essential for helping us recruit the best and brightest engineering students and professors, and building the best facilities for them,” says Sebastian van Delden, dean of the School of Sciences and Mathematics where the program is housed.  “Academically gifted students who are interested in engineering will be applying to several long-established engineering schools. CofC is a newcomer to this arena, and to grab the attention of these students, scholarship dollars are crucial.” 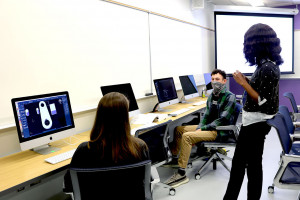 The College approved the initial degree track in systems engineering and welcomed a cohort of 21 declared majors, six of whom were women, in the fall of 2020. Keegan Harvey, from Newcastle, Australia, was recruited by the men’s basketball team in part thanks to the engineering program.

“When I was being recruited for basketball, they also made sure to mention how the engineering program was starting up,” says Harvey, who was also offered an academic scholarship in addition to his athletic scholarship. “Being appreciated for multiple things is always good.”

For the 6’11” forward, who had been interested in engineering since middle school, the engineering program really sealed the deal.

“Wanting to be an engineer, I also had to consider the academics of the school,” he says, adding that he is happy with his decision to play for the Cougars. “The systems engineering program at the College is pretty versatile, which is what I like about it. This semester we’re doing engineering design using computers. I’m having a lot of fun. The assignments don’t feel like work, more like projects I like doing.”

Engineering at the College also began catching veteran and new donor attention. With President Andrew T. Hsu – an engineer himself – acting as a driving force behind at least one major gift, engineering has garnered five major commitments in just over a year from donors who want to see the program succeed.

These new investments not only support scholarships, which is the top fundraising priority, followed by resources for more dedicated faculty and staff, they also provide unrestricted support so that the College may continue to expand its engineering offerings.

Longtime CofC donor Andrea “Andi” Volpe designated $1 million of her estate gift to unrestricted support of the new engineering program. Her early support helped secure approval for a second degree track in electrical engineering that began in the fall 2021 semester. Her daughter is an engineer, and Volpe hopes her gift will encourage more women to study engineering at the College.

BMW and Google Inc., both with multiple interests in the College, were the first corporations to invest in the new program by supporting scholarships.

“We see this as an investment in South Carolina’s students as well as in our future workforce,” says Max Metcalf, manager of government and community relations for BMW.  “Our goal is to help make an engineering education more accessible and affordable to students.” 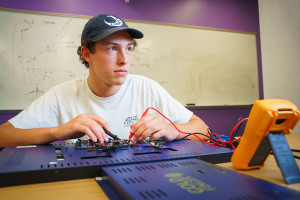 “Google has been proud to call South Carolina home for more than a decade,” says Lilyn Hester, Google’s head of Southeast Public Affairs.  “Through our data center in Berkeley County, Google employs more than 400 people and has made a $2.4 billion investment in the region. We support STEM education and want to provide access for all students. Our partnership with the College of Charleston will provide scholarships for underrepresented engineering students to accelerate economic growth in the state.”

Engineer Will Shalosky started his career in manufacturing at Boeing and sees the College’s engineering program filling a higher-education gap in the Lowcountry given the growing number of technology-related companies in the area. In addition to making a commitment to the program through his estate, he also sits on the CofC Engineering Industrial Advisory Board.

“Philanthropy is important,” says Shalosky. “When building out an entire program and school, it’s impossible for one institution to do that alone, especially when it’s the size of the College. You need people in the community who believe in the institution and what the school can give back to the local community. As an individual, I’ve been fortunate enough to have tremendous success in my career, but I had help from hundreds of people in my life. I feel very compelled to give back to something that can build society and make the world a better place.”

Shalosky shared his experience as a volunteer and donor with another engineer he knows, his father Mike. The elder Shalosky was inspired to make his own investment in the new program by establishing an annual scholarship for CofC engineering majors with leadership qualities. An added bonus of his gift is that his former employer, Abbot Laboratories, matches his gift dollar for dollar.

“I thought it was a way to give back to South Carolina and help the College,” says Mike. “The exciting thing about the College of Charleston is that they are starting fresh, so there is an opportunity to make a difference with young people to begin to exercise their brains a little about how important it is to be a leader.”

Engineering coming to the College is exciting, to be sure, but don’t think that the College is going to forsake its strong liberal arts and sciences tradition. Engineering just brings it into the 21st century to produce a new type of engineer – one ready to tackle a wide range of issues.

And it all starts with a solid foundation.